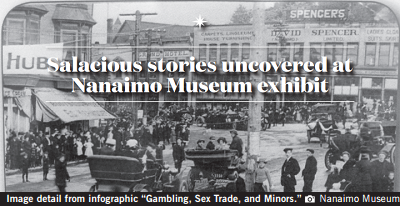 Red Lights and Roulette at the Nanaimo Museum has all the elements of a good crime novel: sex, gambling, corruption, and murder.

“We uncovered stories that could inspire screenplays,” said Interpretation Curator Aimee Greenaway in her February 11 speech at the museum. Focusing from the 1890s to the 1920s, the exhibit displays a side of Nanaimo that is sparsely documented, and largely forgotten.

Nanaimo’s historic red light district occupied a stretch of Fraser St., an area that looks quite different today, she says.

A portion of Fraser St. still exists. The narrow lane leaves the five-point intersection of Wallace St. and Fitzwilliam St. in the Old City Quarter and runs down a steep hill to meet the Terminal Ave. highway. Before it was Terminal Ave., Fraser St. continued along a mud flat until it intersected with Comox Rd.

There were multiple brothels along Fraser St., Greenaway says, including “The Star,” a high-end house of ill-repute so infamous that police didn’t note its street address in their reports.

The exhibit infographics state that between 30 to 40 women probably worked in the industry at any one time. The ladies catered primarily to unmarried loggers and miners, and later to predeployed World War I soldiers as well.

According to census reports on display, brothel owners were usually older women while their employees were typically between 19 and 20 years old.

Greenaway credits the Nanaimo Archives for assistance with research. Others, including five museums outside of Nanaimo, were also invaluable. It took a lot of work to uncover the real lives of these women as they usually claimed to be dressmakers to census officials.

The exhibit tells the stories of several of the owners—madams—including one who was murdered in Kimberly in 1934. Another madam died of tuberculosis in 1895. The young son she left behind grew up in an orphanage before turning to a life of crime.

Other characters include an ambitious reverend who spied on police officers who visited the brothels, an officer who was fired a decade later when he was caught engaged in a lewd act, and a doctor who voiced his concerns that most of the operations in Nanaimo were being conducted on women suffering from sexually transmitted diseases.

Visually, the exhibit includes women’s personal effects and undergarments from the era. Old photographs, postcards, census reports, and maps are also on display as well as items related to gambling and early justice.

There is only one known picture of the red light district, Greenaway says. The museum hopes that the awareness generated by the exhibit will uncover other images from personal collections.

Red Lights and Roulette is at the Nanaimo Museum, 100 Museum Way downtown, until May 1. The museum is open Monday to Friday from 10 am to 5 pm, and admission is $1.75 for students and $2 for adults. For more information, visit nanaimomuseum.com.