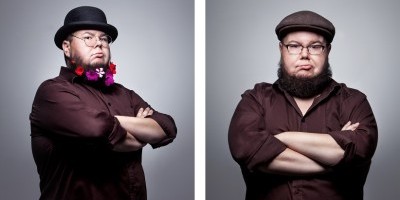 Commanding. The figure, in any other context or on the street, would probably be seen as “unassuming,” just another guy waiting for the bus. But onstage, alone under a single spotlight, his quiet form draws all the energy from the room. Compelling. The audience can’t take their eyes off him. He draws that energy in, and he speaks.

Poets rarely hit the mainstream, and the term “pop culture” is one you’ll seldom find in a discussion of poetry. But the spoken word genre smashes those norms. Underscored by music or beats, spoken word poetry becomes song-like, but transcends what is commonly regarded as a song.

Internationally renowned spoken word artist, poet, and author Shane Koyczan is unlike anything you’ll find crossing over into the mainstream right now (inasmuch as anything involving poetry can really cross over—sad but true).

His words always had the power to captivate an audience, once there was one. His poetry stands beautifully on its own, riding the rhythmic tones of his voice, but set to music, his words venture beyond poetry and become something else—not quite songs, something new. When audiences were unwilling to leave the house for a poetry reading, Koyczan tried something different. “Adding music to what I do was necessary to have people come and at least check it out,” he says. And it worked. A few years ago he played at coffee houses; today it’s soft-seat theatres. As his career grew in this new territory, he saw the potential. “I want the Junos to have to make a category for this,” he says.

The world took notice when Koyczan tumbled onto the international stage in Vancouver at the 2010 Winter Olympic Games’ opening ceremonies. “It was a lot of work and very stressful, but I was happy to give spoken word a spot on a much larger stage. I gave people a reference point for spoken word.” His performance of “We Are More” earned the applause of the planet. The. Entire. Planet.

Then, in 2013, his anti-bullying project, “To This Day,” went viral. “Bullying is a very isolating experience. It’s all based on fear. But if you can see that there are other people going through it, there’s a little bit of comfort.” Canada was rocked by some particularly tragic teen bullying-related suicides in 2012 and 2013. “I feel very fortunate that piece happened when it happened. It was something that people really needed to hear.” “To This Day” continues to support and educate teens, parents, and teachers with its website and iPad app, and has over 14 million views.

Shane Koyczan’s subjects are raw and deeply human. He’s an artist that engages completely, guts-on-the-floor, holding nothing back from his audience. In return, they give back, rip their hearts out and slap them on their sleeves for all to see. His themes are universal—young love, high school hell, family—yet personal enough that everyone feels like he’s talking to them, about them. That’s Koyczan’s gift as a storyteller—he connects with the listener as if they’re the only other one in the room.

Shane Koyczan’s work in spoken word happens to be getting the most ink at this point in his career—he’s finally enjoying some hard-won success—but he’s always compelled to explore a variety of projects and mediums. “I write everything. I’m working on a screenplay, I just finished a short film, I write short stories. I write all kinds of stuff,” he says. And sometimes his work fuses all of these things.

“When I’m thinking about music for a piece, I think in terms of the cinematic. It’s like an emotional lubricant.” He has cultivated relationships with talented musicians, trusted collaborators who work like any band does: a sheet of words, an idea, a stray melody, and everyone’s contributions weave themselves into a composition.

Working with his full band, The Long Story Short, adds another layer to the time he spends on the road. “I love playing with the band, the back and forth. They’re great people, I enjoy touring with them. Being on the road with friends is much nicer than [the isolation of] a solo tour. I love both shows equally—doing a solo show, holding an audience—but it’s lonely going back to your room at the end of the night.” As the Silence Is A Song I Know All The Words To tour crosses Canada this spring, The Long Story Short will be at home finishing an album in the studio.

Koyczan is celebrated in many circles, does good work that changes people’s lives—saves lives—but he’s not immune to his own deep feelings. He speaks openly of his challenges growing up, experiences with bullying and violence in school, and mental health. “Depression sneaks up on you. Like paying rent to a really shitty landlord and you never know when they’re going to show up to collect,” he says. He likens it to something that’s “waiting in the wings, like The Nothing in The Neverending Story.” Like any artist, he also struggles with self-doubt. “I wonder if my creativity will run out one day? How long can I do this? How can I even have a career doing this?” But he does. And the part of his work that really puts a shine in his voice is the marriage of words, music, and images.

His videos extend beyond the world of fast-cut, four-minute marketing packages. Reviewing the body of work on his YouTube channel is like attending a short film festival; these are seven-minute masterpieces, each telling a story in compelling, often heart-wrenching prose, mixed with a variety of filmmaking techniques. Through this lens, his poems are screenplays, and he’s the omniscient narrator.

Koyczan’s latest album, Silence Is A Song I Know All The Words To, accompanied by Cayne McKenzie and Hannah Epperson, was released digitally last August. It’s designed as a companion piece to the book of the same name. “The graphic novel and the album play really well together,” he says. And they’ve gone on to spawn some beautiful pieces of short cinema that blur, scrub out, and redefine our beliefs about what music videos can be.

The latest release, “Heaven, Or Whatever,” (7:37) is a piece of live action film scored by Koyczan’s words and a selection of musical collaborators; it’s an homage to, and attempt to understand, his grandfather. “Ideally, I’d love to make a video for each piece on the album and have them stitched together to make a feature film. There would be a different visual aesthetic for each piece.” The video for “Troll,” dedicated to those who have lost friends or family through online abuse, takes a different approach visually, featuring the artwork of graphic novel illustrator Gareth Gaudin. Koyczan’s recent collection of poetry, A Bruise On Light, also fits seamlessly with the work on Silence Is A Song I Know All The Words To.

In spite of warm receptions and two satisfying years on the road, depression continued to lurk in the corners for Koyczan. “It’s been a challenge to feel happy about my achievements while dark clouds appear constantly on the horizon,” he says. “Nevertheless, writing has been a source of great comfort, and helps me to occasionally pan small pieces of gold from these streams of consciousness. A Bruise On Light is a collection of stone and gold, impurity and shine.”

While Koyczan defines success as having a warm, safe place to live and good food to eat—and he is very grateful for his success—he isn’t living on easy street. The realities of being an artist in the online age make it hard to earn a living. It isn’t easy to sell CDs and digital downloads, but it’s still expensive to make an album, he says, “And I still have to pay my musicians. Even if I don’t sell anything, they still need to be paid.” Part of the struggle, he believes, comes from the nation’s failure to put real value on art. “In Canada, we mourn our artists; we don’t celebrate them like they do in other parts of the world.” He jokes that artists should just be paid to make art because it makes the world a better place. But he’s only half joking. “Artists go into labour to create these pieces,” which is something that’s hard to attach worth to, to value the effort it takes. Under the realities of the economy and the industry, “Artists are in a really precarious position—how do we continue?”

Like others, he’s grappling with making a living from his art in the new market economy. Online work and social media are important pieces of that, but they’re time-consuming, and they don’t, in and of themselves, actually pay. Koyczan maintains a strong online presence on his website, Facebook, Twitter, and Instagram.

Touring is one income stream that has served him well. It’s also a venue to get books and CDs into the hands of his fans without losing a cut of the profits to a middle man. Taking Silence Is A Song I Know All The Words To on the road this spring is a welcome opportunity to share the material and reconnect with his fans across Canada.