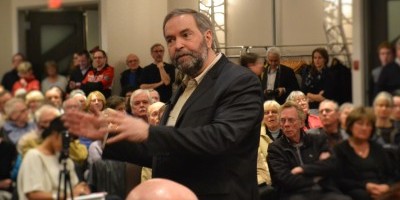 “My only priority is to get rid of Stephen Harper’s conservatives and replace them with our progressives,” Mulcair said. “I could make Stephen Harper turn beet red in 35 seconds.”

“Without a social license, nothing gets built,” he said.

According to Mulcair, the NDP are the only ones standing up to Bill C-51. “Liberals are against it but will vote for it,” he stated.

Mulcair stated the NDP believes Canadians deserve to have both a strong economy, as well as a healthy environment. The NDP’s proposed plans include increasing environmental assessments and supporting small businesses.

“The NDP will fight tooth and nail to determine a system where the size of a family’s income doesn’t determine whether they have health care,” Mulcair said.

Mulcair stated he would aim to raise the minimum wage to $15 an hour.

When asked about the NDP’s stance on medical marijuana, Mulcair said the NDP will rely on evidence-based decision-making. He stated the use of marijuana is a personal choice by an adult and that it would be decriminalized.

Mulcair said the NDP will tackle the issue of student debt and encourage young people to vote.

Mulcair concluded by quoting former NDP leader Jack Layton: “Never let them tell you what can’t be done,” he said.

The VIU Political Society presented Mulcair with a letter of recommendations put together by club members and other students who were polled on what they believe would make a great Prime Minister. The list was as follows: