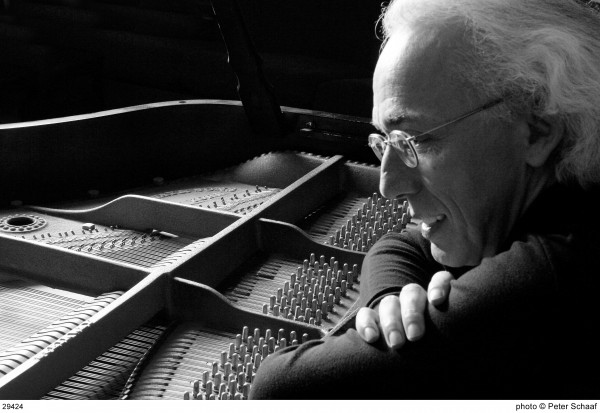 Laplante has been called “an artist of rare romantic inspiration.” [Photo courtesy Nanaimo Conservatory of Music]

On Sunday, March 15, Nanaimo will have the rare opportunity to welcome world class pianist André Laplante. Widely regarded as one of Canada’s best, the Québécois virtuoso will appear at the Port Theatre in solo concert.

A pianist of global repute, Laplante is the recipient of international attention after winning prizes at the Geneva and Sydney International Piano Competitions; his capture of the silver medal at the International Tchaikovsky Competition in Moscow remains a bright moment in Canadian music history. Laplante recently talked with the representative of Nanaimo Conservatory of Music about his approach to teaching, his fondness of heart music, and the riveting charm of his latest favourite film The Imitation Game.

You’ve said in previous interviews that you already planned to play music professionally from a very young age. Were your parents supportive of you?

I started when I was about six years old, a year after my older sister began her studies, although she didn’t take to it as I did. I liked to practice and I insisted on lessons. My mother and father weren’t initially encouraging of this seriousness. You know, every parent worries about their kids making a living. I think they also suspected that after a year of scales I would get sick of it and wouldn’t want to continue. I really struggled to convince them that this is what I knew I had to do.

What kind of impact did your music teacher, school, or broader community have on this early ambition?

In my childhood, I tried a number of different teachers who taught privately, not in a Conservatory or something similar. I found these teachers lacked rigour and it never really worked for me. I don’t think I truly had my first piano lesson until age 15, when I began to work with Yvonne Hubert at École de musique Vincent-d’Indy. She was an expert in the turn of the century of French composers, who had won acclaim while studying at the Paris Conservatoire with Gabriel Fauré. Her tutelage made a tremendous difference for me.

And yourself, did you begin teaching early on?

About one year after the Tchaikovsky [competition]. Up until then, I was fully occupied with touring, but as it wound down I took an assistantship at Juilliard. However, it wasn’t long before I found myself too busy with concertizing to continue seeing students. I really only had time in the summers, when my schedule had a slightly slower pace—just slightly. I still only do it part time today. I’ve had offers from big institutions, but they require me to teach full time, so I turned them all down. The Conservatoire de musique et d’art dramatique du Québec allows me to take a small selection of students, so I am very happy in my capacity there. Don’t get me wrong: I enjoy teaching, but playing must come first for now.

With teaching in Montreal and giving master classes in places like Vermont, you constantly encounter emerging pianists. What are some of the changes in young professionals that you’ve noticed since your own debut?

The current tendency is that young people suffer from a strange perfectionism. They want to be very effective, very efficient, and they want to play the really big stuff. Students also feel a lot of pressure to succeed at a very young age. I think everyone has a pace and some people simply bloom later. I know teachers who say that if you haven’t had a major appearance by the time you’re 18, your career will never go anywhere, but I really do see potential in later learners.

Your discography mainly specializes in the Romantic era of composition. Do you consciously avoid playing other styles in order to focus on the 19th century?

In my current evolution, I think I have the flexibility to play just about any style well. But I do like to record what I know best. As a result of my teachers and own tastes I may have neglected the classics a little in favour of the big Romantic piano works as a young student, and so when I arrived at Juilliard I was familiar with these composers and not so much the foundations. I am definitely open to classical projects in the future. I think it’s a good idea not to specialize too much.

I understand you do play contemporary works, for example, in live settings, which leads me to ask: how is choosing a programme for a live performance different from planning an album?

For concerts, I select programmes a year in advance, but take about two years for a recording. Usually I will test out a tentative programme while touring before bringing it into the studio. My attitude in a recording environment is that you should feel 200 percent free to experiment—because, after all, you can always do it again. I am not big into post production and I don’t like a lot of splicing. At first I was very hesitant and careful, but now, being used to the pressure, I have more freedom to innovate and be spontaneous and relaxed in recording. One important thing to remember is that there is no such thing as a definitive performance; rather, some are more convincing than others. In such a situation, an artist has gone to the end of his or her own feelings in a piece. This is the highest measure.

It’s exciting to think that some of your live programmes are road tests for future recordings. What can Nanaimo audiences expect to hear at the Port Theatre this March 15? Are there any potential LPs hidden in this repertoire?

Well, I think it will be a very well-balanced programme, including the Quebecois composer François Morel, some Liszt, and some Schubert, the latter being indeed a possible future project. I think the music will be very much alive and full of feelings with real intelligence. It’s heart music, perfectly crafted and elegant in its simplicity.

When you’re away from the piano, how do you like to spend your time?

I like to read and exercise. I try to put music away for the moment and take fast walks. I am so lucky to have lots of friends all over the world, with whom I try to stay in good touch. I also enjoy seeing films, and I highly recommend The Imitation Game, starring Benedict Cumberbatch as Alan Turing. It’s one of the best I have seen in a long time—simply riveting, especially the acting. It’s hard to stop working but we have to do it, so go see this movie!

Experience André Laplante live at the Port Theatre on Sunday, March 15 at 2:30 pm. This solo piano concert is produced by the Nanaimo Conservatory of Music, a 35-year-old organization offering classical music performances and music education of the highest calibre. Tickets cost $38, $25 for students, and are available from the Port Theatre box office at 250-754-8550 or online. The master class taking place Monday, March 16 at 10 am at 375 Selby St. is open to observers for a $10 admission fee. To register, call 250-754-4611.