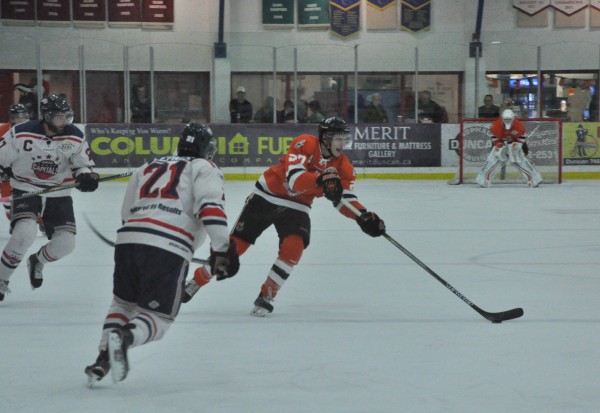 With a victory in game 7 of the BCHL’s Island division final, the Nanaimo Clippers captured their first division championship since 2008. The Clippers picked up a 3-2 victory over the Powell River Kings at Frank Crane Arena on Sunday, March 22. More than 1900 fans in attendance were treated to an intense game.

The Clippers and Kings entered the third period tied 2-2, but just 18 seconds into the third period, Clipper forward Cole Maier scored the series deciding goal to send Nanaimo onto the next round.

The Clippers never trailed during game 7, with Spencer Hewson scoring just over two minutes into the game to give Nanaimo the early lead. The game remained 1-0 until midway through the second period when Stephen Hiff found the back of the net to tie the game 1-1. After Nicholas Gushue scored to restore the Clipper lead, Derian Hamilton found himself alone in the slot and fired a wrist shot past Clipper goaltender, Guillaume Decelles, to tie 2-2 at the end of the second, setting the stage for Maiers heroics.

With the series victory and division championship, the Clippers will now take part in a round-robin tournament involving the leagues three division champions. Each team will play four games in the round-robin, two against each team. Each team will be awarded two points for a victory and no points for a loss (including overtime losses). After each team has played their four games the team with the least points is eliminated. The remaining two teams will play a seven game series against each other for BCHL championship and the right to represent the BCHL in the Western Canada Cup which will be held in Portage, Manitoba.

The Clippers opponents for the round robin tournament are the Penticton Vees (Interior division) and the Chilliwack Chiefs (Mainland division). The Clippers first game of the tournament is on Wednesday, March 25 in Penticton against the Vees. The Clippers will then return home for their first home game of the round-robin on Friday, March 27 against Chilliwack. Tickets are available at the Clippers ticket office at Bowen park on Thursday from 1-5 and 10-5 on Friday. The box office at Frank Crane Arena will also be selling tickets at the door starting two hours prior to game time. Tickets for VIU students are $10.