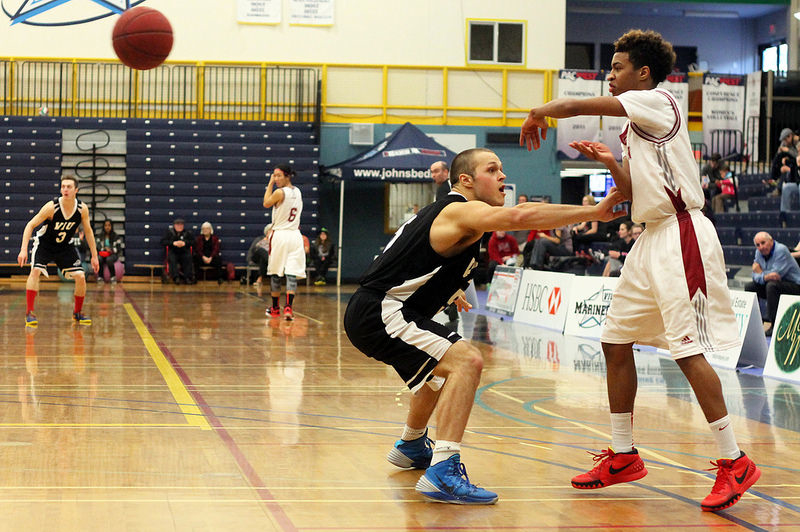 The championship game was a tightly contested defensive affair. The two teams went basket for basket through the game’s opening quarter with Humber, taking a 17-15 lead after the first. The Mariners were the stronger team early in the second quarter, taking a 21-19 lead in the quarter. VIU extended their lead to 28-22 with five minutes left in the half. The Mariners held onto the lead until the final few seconds on the half, when Humber got a basket on their final possession of the half to tie the game 34-34.

Each team held the lead briefly at the start of the third quarter. First, the Hawks jumped out to a 38-34 lead, but a few minutes later Jason Fortin converted on a couple free throws to put the Mariners out in front 40-38. In the last three minutes of the quarter, the Hawks took over the lead and held a 47-42 advantage heading into the third quarter.

The Mariners cut into the Humber lead as the fourth quarter got underway, tying the score at 57-57 with just over five minutes left in the game. But with two minutes left and the game tied 60-60 the Hawks took the lead for good. The Hawks scored six straight points to take a 66-60 lead. The Mariners tried to battle back one more time, but their comeback fell short as Humber captured their sixth National Championship, the most championships of any team in the CCAA.

The loss marked a disappointing end to a great season for the Mariners. VIU finished the PacWest regular season with a record of 20-1, giving the team their first top finish in the standings in three years. The Mariners also captured the PacWest Championship, ending a run of three consecutive second place finishes. VIU also broke the school record for points in a game twice this season. First, the team broke the previous record of 118 by scoring 121 against the Columbia Bible College Bearcats on February 20. The team then shattered their own record the next night by scoring 136 points in a win over the Kwantlen Eagles.

The Mariners’ men’s basketball program is a force in the PacWest, picking up at least a silver medal in each of the last seven years. There is no doubt that the Mariners will be ready to take another shot at the National Championship next season.