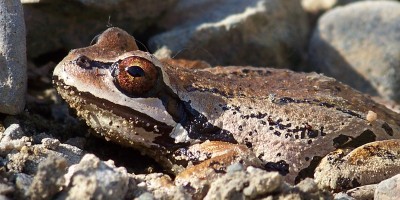 By now you’ve probably heard the nightly chorus, one of the surest signs that springtime is near. A choir so loud that it often hampers sleep, the song of the Pacific Tree Frog is a beautiful reminder of the rich amphibian diversity supported by our wetlands and streams, and what these animals are up to as they emerge from their wintertime of hibernation. The word amphibian is Latin for “both kinds of life,” meaning that generally all amphibians have certain adaptations, living and breathing both in and out of water during certain stages of their lives. Vancouver Island’s amphibians are made up of roughly a dozen species of frogs, toads, newts, and salamanders, all of them cold-blooded, relying on their environment almost exclusively to heat their body. It is this characteristic that sends them beneath logs or under water to wait out the cooler months. But as the weather warms and food becomes more abundant, these critters become more conspicuous in our forests and marshes.

Arguably the most visible, and certainly the most vocal Vancouver Island native amphibian is the aforementioned Pacific Tree Frog, or the Pacific chorus frog. These animals are found all around south-western BC, as far down the Pacific coast as the northern Baja peninsula, and are easily recognized by their multi-toned green skin which changes hues with changes in temperature. Female frogs reach up to 50 millimetres long while males are slightly smaller. They have been found in riparian areas anywhere from sea level to well over three thousand metres in elevation. Using their adhesive padded feet, these frogs climb up tree limbs, hedges, and even house walls in search of flying or crawling insects that they catch by the dozens with their long sticky tongue.

And the reason for that incredible call? To attract a mate, a male tree frog first finds an appropriate site from which to attract his female companion, a site which will give good projection for his calls and provide ample standing water for the eggs that will eventually be laid. The male then releases a two-toned “kreck-ek,” calling females towards him, and he won’t stop until the attracted female makes physical contact. The female’s eggs are fertilized internally and laid in standing water, often attached to or just beneath the leaves of pondweed or other plants. They hatch into tadpoles between two and three weeks later. These tadpoles will feed on algae or pollen on the water surface until they undergo metamorphosis, shedding their tail and developing limbs. In two to three months, the young will resemble tiny frogs. About a year after hatching they will mature and begin to mate themselves, if they survive. Pacific Tree Frogs are prey for a number of bird species, snakes, and some small mammals.

Following a similar seasonal pattern, another handsome local amphibian in our streams and marshes is the Roughskin Newt. Easily identifiable by their bright orange bellies and tan-brown backs, dry textured skin, and lack of costal grooves, the Roughskin Newt can grow to be 180-200 millimetres long. Their tails make up as much as 5/8 of that total body length. Throughout the winter, these newts primarily shelter burrowed beneath downed logs in the forest, hibernating while temperatures are cold and food is scarce. In the springtime, as the weather warms, these newts emerge and begin to feed on anything they can get their hands (feet?) on, including a variety of insects, larvae, and even other young amphibians. Eventually they make their way into a body of water, pooled or slowly moving, and begin one of the most intricate mating rituals of any creature. Once submerged, male newts locate females by smell. Once they have come into contact, the male latches onto the female’s back for hours or even days, and releases a pheromone to excite her. When the time is right, the male releases a spermatophore packet on the pond bottom. The female picks up the packet through her cloaca, and then lays her eggs beneath submerged rocks or aquatic plants. The eggs will hatch three or four weeks later as larvae, and metamorphose into adult salamanders anywhere from one to two years later depending on local environmental conditions.

Unlike the Pacific Tree Frogs, there is not much that feeds on the Roughskin Newt. A common theme in much of the plant and animal kingdoms is that if something is brightly coloured, it is usually to warn predators of its toxins. The orange belly of the Roughskin Newt is no exception. Over much of its territory it is amongst the most toxic of amphibians. Throughout BC, a number of birds and fish that are found dead had newts in their stomachs and were killed by the tetrodotoxin. One species of predator, the common garter snake, has adapted to eat the Roughskin Newt due to resistance to the particular toxins found in the newt’s skin. Interestingly enough, Roughskin Newts found on Vancouver Island rarely, if ever, have tetrodotoxin in their skin, and correspondingly, the Island’s garter snakes lack this resistance to tetrodotoxin.

Both the Roughskin Newt and the Western Bullfrog are native species to the Island and play important roles in their corresponding ecosystems. While neither of these species are currently recognized as at risk by the Committee on the Status of Endangered Wildlife in Canada (COSEWIC), they are still under threat. Habitat loss and watershed disturbance remain a plague to amphibian populations, but locally the biggest threat to native amphibians has been the introduction of the Western Toad early in the 20th century. The intention was to farm them for their meaty legs as they grow large, upwards of 200 millimetres long. As their diet is similar to our native frogs, there is fierce competition for food. While studies of the effects that this species is having on local native populations are ongoing, it is believed that, if left unchecked, this invasive bullfrog is gradually edging many of our local frogs out of their habitats.

As the weather warms, there are many great places to view amphibians, though respect must be shown towards these creatures. Human intrusion into their habitat causes a great deal of stress, and touching them has the potential to harm their skin. With this in mind, set out for places like Westwood Lake where frogs, toads, and salamanders may be beginning their springtime courting rituals. In the evenings through April, if you are anywhere near a pond or creek you will hear the Pacific Tree Frog serenades.

For more information about Vancouver Island’s rich amphibian life, and the array of plants and other animals that make up our local ecosystem, visit the Museum of Natural History, run and curated by students and faculty from various sciences departments. The museum is open to students and the public on Mondays from 10:30 am to 12:30 pm, Tuesdays from 1:30 to 2:30 pm, and Thursdays from 11:30 am to 1:30 pm. More information is available on their Facebook page and at viu.ca/museum/.