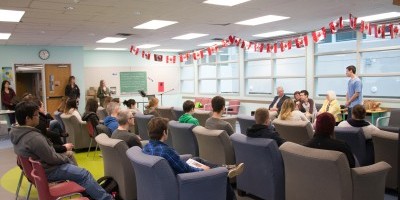 The VIU Political Society had its first Student Political Conference on March 24, giving students the opportunity to voice their opinions about various issues and mingle with politicians.

Question and answer periods allowed students to bring up relevant issues such as the lack of full-time jobs, voter apathy among youth, Bill C-51, and Canada’s role as an actor on the world stage. Question periods were followed by free time that allowed students to mingle with the politicians and each other.

When addressing the issue surrounding a lack of full-time work for youth in the area, the politicians agreed it was something that needs to improve.

“We don’t want a community that is sterile,” said McKay. “We need affordable housing and an environment where businesses want to locate. We want to have all the desirable amenities young people want.”

“We need to create tourism and attract businesses so there are clean, environmentally friendly jobs for young people,” said Pratt. “We don’t want to see young people going up north to the oil sands just for the money. It doesn’t create healthy communities, and families can fall apart very easily with those pressures.”

“Corporations are giving part-time (hours) intentionally so they don’t have to pay benefits, so benefits should be paid whether you are working part-time or full-time,” said Manly.

“It’s a Harper approach to economy,” said Malcolmson. She stated that the government should focus on tax cuts for small businesses, raising the federal minimum wage, supporting a national childcare program, and strengthening pensions.

Discussion surrounding Canada’s role on the world stage revolved around the idea to return to peacekeeping.

Canada’s military should represent peace, Tessier said. He stated that Canada holds a leadership role and has the technology and humanity to allow it to provide aid to other countries.

“We are a middle power,” Manly said. “We have a history of diplomatic strength.”

But Manly stated that when we look at the destruction Canadian mining companies are causing in South America or Canada’s role in the Middle East, we do not see that diplomacy.

“Stephen Harper said we wouldn’t recognize this country when he was done with it and now we have a black eye.”

Discussion around Bill C-51 grew heated when Tessier was questioned on the Liberals’ stance.

“Harper’s government is creating fear,” Tessier said. But he explained that Justin Trudeau is approaching from a non-partisan standpoint, and has claimed the Liberals are in favour of voting for the Bill once the final revised version is read.

Tessier agreed that Canadian’s civil liberties would be at risk. “We need checks and balances in place,” he said.

Manly stated the Green Party was clearly against Bill C-51, as it would turn Canada into a police state.

Malcolmson gave a similar response, stating that the Bill is designed to create a fear-based story in the media in order to discourage voter participation.

“We can’t protect our freedoms by undermining them,” Malcolmson said. “We will fight it as hard as we can.”

When asked about voter apathy among youth, Tessier said, “We need to have focus groups with youth so they can come and tell us what they would like to see improved.” The politicians also had a variety of suggestions:

Bill C-51 Protests in Nanaimo and Across Canada