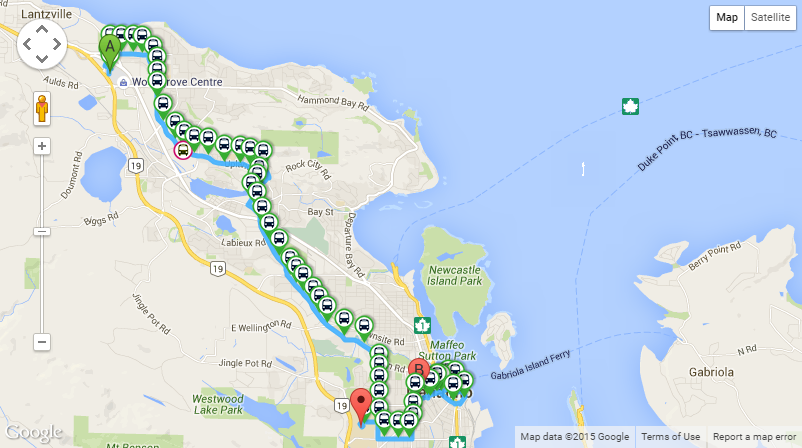 A new frequent bus route has been added to Nanaimo’s transit system that will help students get to and from VIU more efficiently.

Effective September 6, the 40 VIU Express will connect downtown, VIU, Country Club, Nanaimo North Town Centre, and Woodgrove. The route will give students another option to get to VIU with high frequency, said Jamie Logan, Superintendent of Transit Scheduling and Planning.

During the busiest times of the day, such as morning and late afternoon, the route will have an average frequency between 15 and 30 minutes, which is an improvement over the other routes to VIU, Logan said. In the evenings and on weekends, the frequency will be closer to 45 minutes.

The route will make 53 trips in each direction between downtown and Woodgrove a day, Logan said.

“It’s a cleaner, faster way to get to VIU,” Logan said. “There will be a downtown stop by the police station for transfers, but it will also go to the waterfront.”

The old VIU line will still be in place, and people can catch either bus at the same stop, Logan said.

The new route is a response to the public’s requests and needs of the transit system.

“We had transit info stations set in public places to ask what people want to improve and change in the transit system,” Logan said. “Then we developed transit future plans for the next few years, and one of the changes was the frequent transit line. So we found the hot spots to make as direct a line as possible.”

There is also a new route numbering system that will help riders understand the transit system better. Routes with single digits are local routes, and routes that end in zero are north/ south routing. Riders can transfer to local and inter-regional routes at Prideaux and Woodgrove exchanges.

On the first day of classes, transit employees will be at the VIU bus loop explaining the express line, Logan said. There will also be supervisors at Woodgrove explaining the route to riders while it is new.

The new schedule is available in full online on the BC Transit website.