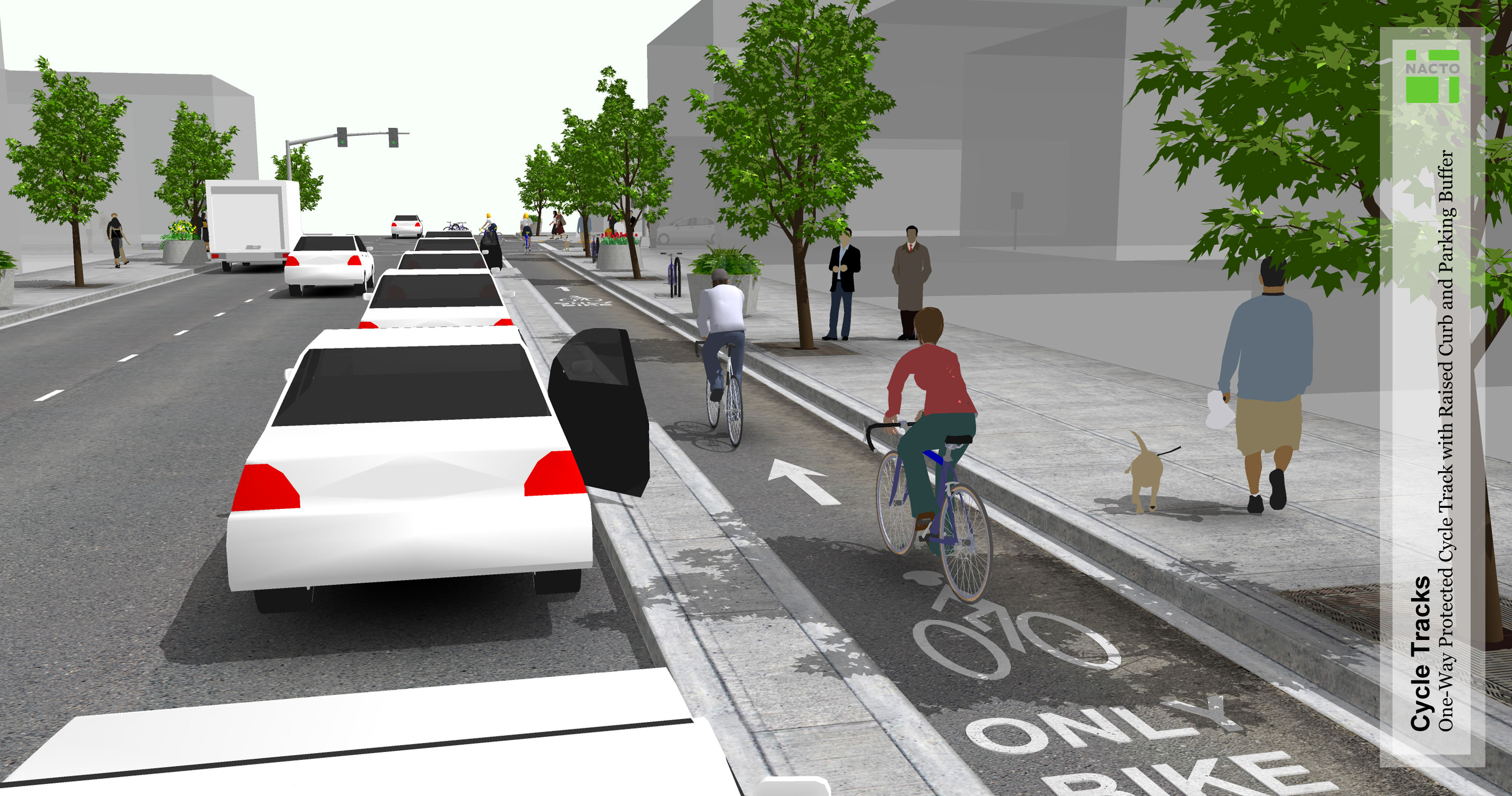 Above: Proposed one-way cycletrack. Image courtesy of City of Nanaimo

When commuters choose bicycles over cars, the benefits are undeniable: less congested roadways; lower demand on parking spaces; a cleaner environment; and a workout for the legs, heart, and lungs without a trip to the gym. Many businesses, like VIU, make it easier for their staff to ride to work by providing showers and secure bike parking. But sometimes those benefits aren’t enough; unless people feel safe outside of their cars, they’re unlikely to leave them.

With motor vehicles increasingly sharing the roads with cyclists and pedestrians, the City of Nanaimo is trying to reconcile everybody’s needs in a safe, cost-effective way. Growth patterns are changing in the city, and the population is projected to increase by 46 percent over the next 30 years. Recognizing this, the previous City Council, in consultation with various local stakeholders, developed the Nanaimo Transportation Master Plan (NTMP). The final report, adopted in May 2014, helps shape the City’s transportation policies, parking, and investments that address roads, transit, and their users over the next 25 years.

The City estimates that there are currently three thousand cycling trips in Nanaimo per day, and hopes to raise that number five-fold, to 15 thousand trips, by 2041. Residents have indicated that they would be willing to cycle more if bicycle facilities were improved, and the network of routes grew to better serve important areas like downtown and VIU. Infrastructure supporting bicycles, like secure parking, is being incorporated into new office, commercial, and higher density residential building construction.

As a stakeholder in the development of NTMP, the Greater Nanaimo Cycling Coalition (GNCC) prioritized one of their primary goals: “Make bicycling in the Nanaimo region safer and more accessible to people of all ages and abilities.” Chairman Leo Boon sits on a variety of committees and works with different organizations representing the needs of cyclists in Nanaimo. The coming population increase makes it more important than ever to make serious improvements to connecting people with different areas, he says.

Boundary Ave. was identified as a good candidate for new facilities that support NTMP, says Gordon Foy, City Manager of Transportation. The City had scheduled the Hospital Area Project upgrading water mains and underground utilities for this summer, which provided an opportunity to incorporate new infrastructure for pedestrians and cyclists into the work. It was also a good candidate for a pilot project—installing cycletracks, a fairly new approach in North America—because it’s a short section of roadway. That allows drivers to build their awareness of, and gain experience with, negotiating a new type of layout, Foy says. That familiarity will ease the transition as more of these types of lanes are installed throughout the city.

On Boundary Ave. between Dufferin Cres. and Strathmore St., buffered bike lanes—separated from traffic by a painted buffer area—run southbound, while cycletracks—bike lanes along the curb with a painted buffer area and parallel parking separating users from traffic—run northbound. The dedicated spaces between traffic and cyclists help alleviate concerns about crowding and honouring the right-of-way. The project added buffered bike lanes from Northfield Rd. through to Townsite, and over Bush and Pryde St. to connect with Bowen Rd. and the Buttertubs Marsh Trail. This connects with the E&N Trail, allowing cyclists a pathway between the hospital area and VIU. While cycletracks are the most prominent element of the Hospital Area Project transportation improvements, there was a “complete street” type of approach that benefits all users, including safer turning for cars and better visibility at pedestrian crossings, Foy says.

The Province of BC helps municipalities fund infrastructure programs that form part of a bicycle network plan, such as NTMP, through the BikeBC Program. The City of Nanaimo received $120k for the Boundary Transportation Improvement Project. “The province funded the cycling improvements to about 50 percent of the costs,” Foy says. “We plan to apply again this fall for our 2016 projects that fit within the grant criteria.”

The introduction of cycletracks wasn’t without detractors. “Any time you do something new in Nanaimo you’re going to get people whose hair immediately goes up,” Boon says. Complaints relate to confusion along the route, dangers involved in drivers and cyclists crossing one another’s paths, and poor visibility. “People have to pay attention. They would have had to pay attention before; it’s no different,” Boon says. Road markings and signage are in place to reduce confusion, but a lot of the backlash is simply a result of people encountering something new, says Foy. That tends to fade over time as people get used to it and begin to enjoy the benefits. The same cycle of protest to acceptance was seen after the installation of roundabouts and small traffic circles.

While the city is improving infrastructure to make cycling safer, fear of injury remains a real barrier to getting more bikes on the road. “The issue is bikes versus cars. There has to be some give and take for everybody; neither side is following all the rules,” Boon says. According to the Insurance Corporation of BC (ICBC), on average, one cyclist is killed and 180 are injured every year between May and October on Vancouver Island. A review commissioned by ICBC found that, in North America, cyclists and drivers share the blame for collisions equally. Intersections where there are no traffic controls are the most common site of accidents. Often, cyclists were found to be riding without due care, while drivers were found to fail to yield right-of-way. However, the single most common bicycle accident was falling without the involvement of any other vehicle.

“IN NANAIMO, MOTORISTS AREN’T THAT BAD. SURE, THERE ARE PEOPLE THAT BLOW YOU AWAY AT TIMES, BUT THE AVERAGE MOTORIST IS PRETTY DECENT TO CYCLISTS IN NANAIMO.” – LEO BOON

Mutual respect between vehicle drivers and cyclists— recognizing that each is equally entitled to the roads—goes a long way toward keeping roadways safe for everyone. Basic knowledge of their rights and responsibilities is a key part of building and maintaining that respect. “Bicycles are called vehicles, cars are called motor vehicles. All have to obey the rules of the road,” Boon says.

According to the Ministry of Transport, bicycles—like any slower moving vehicle—should move as far to the right side of the road as possible so that others can pass. Sometimes hazards like potholes or debris make it safer for cyclists to ride in the centre of the lane. Impatient vehicle drivers may crowd or tailgate cyclists in the centre of the lane, but they are riding legally.

Treating cyclists like any other vehicle on the road makes it safer and easier for them to share that road. In fact, when drivers make conditions more attractive to cyclists, there are fewer cars on roads, which equals less stressful commutes. Everyone wins.