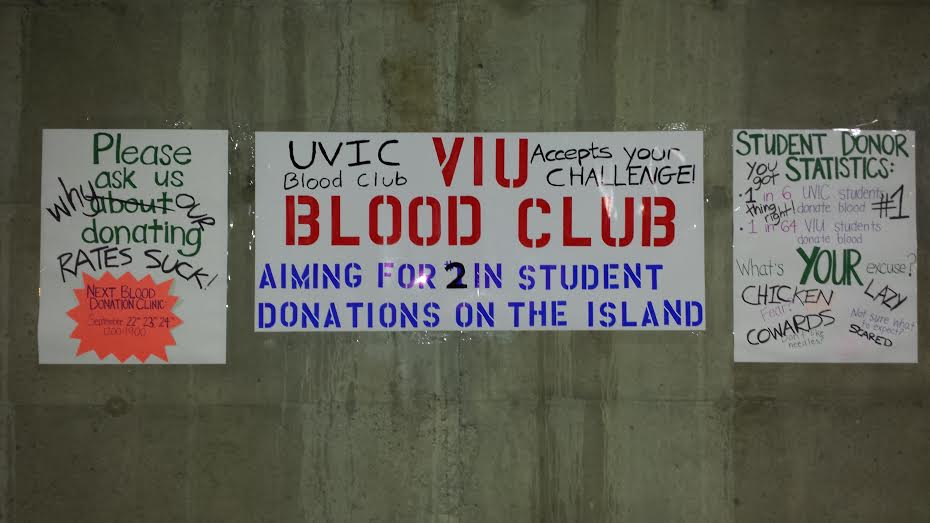 VIU’s Blood Club is challenging the University of Victoria’s (UVic) club, Blood4Life, with the claim that VIU can recruit more donors than UVic.

Both clubs focus on raising awareness of the need for blood donors, providing education, and helping out with blood drives. UVic’s club currently has more donors, as it has been established longer that VIU’s, but nursing student and chair of the Blood Club Scott Remmer is determined to change that.

“I’m currently calling it ‘Operation Bad Blood,’” Remmer said. “I want to start a bit of rivalry between the two schools.”

Chair of UVic’s club Darcy New said they would be more than willing to participate in this rivalry. “We have a group of about 25-30 existing volunteers and have recruited and trained 34 new members this year.”

Remmer is planning on making the club’s presence bigger on campus by holding tables where they will provide information and sign-up sheets for potential donors every two weeks in the lead up to blood drives in the area. In the Nanaimo region, there are blood drives every 56 days, which are run by Blood Services Canada. The club will have tables set up in both the upper and lower cafeteria on November 10 from 11:30 a.m.-1:30 p.m. and the next blood drive is November 17, 18, and 19 at Beban Park Social Centre.

“If we can’t have the drives on campus, I would like to get busses or shuttles to run from campus to the blood drives,” Remmer said.

“We’re also going to get the art department involved with making more posters about the club and blood drives. But I don’t think posters have enough of an impact, so that is why I’m challenging UVic. I don’t want to just be the person that sets up the tables and does all the normal crap everyone always does.”

Remmer believes that misunderstandings about the realities of the blood donating process prevent people from signing up.

“Things such as how much time donating takes steer people away, but it is actually only an hour from when you get in the door to when you leave with your cookies,” he said. “People are unaware; they don’t know what to expect and aren’t informed of what the process is. They think it will be more painful, but it only takes a few minutes to take the blood. The thing that takes the majority of the time is the questionnaire and test to make sure you qualify to donate. Plus, you can sit and eat cookies as long as you want; they won’t kick you out.”

Last year, Blood Services Canada declared that the country’s blood supply was at a six-year low. These donations are needed for a large variety of injuries and illnesses, from victims of car accidents, to chemotherapy patients, and those going through dialysis.

“I think a lot of people feel desensitized about the issues because they don’t have time to think about how you or your family could need blood in the future,” Remmer said. Email Remmer at s_remmer@yahoo.ca with the subject line “minions for the blood club” to get involved with the club, and drop by the club’s table on November 10 for further information, or to sign-up to be a donor. Visit Blood Service Canada’s website or call the Service at 1-888-2-DONATE (1-888-236-6283) for more information.