After a province-wide consultation process this fall, the Select Standing Committee on Finance and Government Services has endorsed students’ call for more accessible education and the restoration of funding to Adult Basic Education (ABE).

This endorsement comes from a recommendation to the government by the Liberal and NDP members of the Committee
to build the budget based on what citizens have shown they want to see. “We hope to see a lot of these recommendations reflected in February when the budget is released,” said Michael Olson, Executive Director of the VIU Student’s Union (VIUSU).

ABE programs provide high school equivalent courses for citizens returning to school for retraining and upgrading, which
include adult special education and basic literacy programs. ABE has been tuition fee-free in BC since 2007 and more than 25 thousand British Columbians—about 800 at VIU— use this program each year. However, the 2015 provincial budget eliminated funding for the program, which allowed institutions to make up for the shortfall by charging tuition fees. Fees for ABE classes are similar to that of most regular university courses, at $320 per class.

“Public ABE programs are an essential component of raising adults out of poverty,” said Simka Marshall, Chairperson of the Canadian Federation of Students-British Columbia (CFS-BC). “It helps people gain the knowledge and skills they need to get better jobs, support the economy, and create better lives for themselves and their families.”

In its report, the Committee states that ABE benefits the province, and a healthy economy, as it calls for restored funding of
ABE.

Since April 8, 2015, CFS-BC has been calling for this restored funding through its campaign, Don’t Close the Doors. Thousands of concerned British Columbians have signed the online petition at <dontclosethedoors.ca>, and the campaign has gained many partners, including the City of New Westminster, Victoria, and Burnaby, as well as all of the student’s unions that are part of CFS-BC, and other active non-member student’s unions, such as the University of Victoria Student Society.

“VIU has been very active with the campaign. On the Nanaimo and Cowichan campuses, we have been doing class talks to
speak with people about this specific issue,” Olson said. “And not just in ABE classes— in general academic classes as well. The response has been pretty passionate and enthusiastic in support for the program. I think people just recognize that high school courses are high school courses. It doesn’t matter if you graduated 10 years ago and you’re trying to upgrade. You should have access in order to get into those programs.”

VIUSU is also in the midst of doing outreaches with the city councils of the region, including Cowichan, Powell River, Nanaimo, and Qualicum, as well as the Chambers of Commerce, in order to attain endorsements.

In 2007, when the government first eliminated ABE tuition fees and gave proper funding for those programs, it was after a
province-wide consultation called Campus 20-20. The report said these programs should be accessible for all people. “The Chambers of Commerce in BC, as well as individual municipal parties were all supportive of the idea that this would be good for the workforce and good for British Columbians, which is why we are reproaching those chambers,” Olson said.

ABE Enrollment has remained steady on the Nanaimo campus, but there has been a massive decline at the Cowichan campus.
“For example, I was there a couple weeks ago, and they have a math class that has about four people in it,” Olson said.

The government has cut $7 million out of the ABE program and provided $1.5 million for an upgrading grant. There is a low income threshold that states if a student makes less than $22k a year, they qualify for this grant.

“The demographic here almost entirely falls below that threshold,” Olson said. “The amount of money VIU was supposed to have gotten would not have been enough. I think they had to double the amount they gave to VIU in order to provide what they promised for funding, which was only because VIU was able to push for additional funding. The upgrades we have here for IT is costing millions of dollars just so we can have Wi-Fi properly on campus, but where is the funding coming from for that kind of stuff?”

Members of VIUSU will continue to raise awareness of the issue by doing class talks, holding information tables, and trying to get students to sign the campaign petitions. There are also actions people can take individually as well, Olson explained. “They can use Twitter and Facebook to show their support for the campaign,” Olson said. “We’re trying to encourage people to do that because we need more than just the seven people here from this office doing that. We need it to be a big show of public support.”

“A lot of people don’t know,” Olson said. “Once they do know, they understand instinctively why it is so important to not have financial barriers. It’s the first step to talking about how education more broadly needs to be accessible and not have those financial barriers. And I think people will think about their own tuition and think, ‘Wow, I can’t imagine having to pay for an upgrading class before going into my degree.’”

VIUSU will also be holding lobby meetings with MLAs from the region, where they will highlight the ABE issue. The report
also recommended that the government implement a needs-based grant program and review interest rates being charged on student loans.

“We highlighted the ABE issue in the report because we think it’s the most important one,” Olson said. “The ABE issue has a far lower price tag for the government and so we’re hopeful that, by focusing on one thing, we might also win those other things. We also don’t want to discount that BC has the lowest form of financial aid in the country. I think that our priorities in focusing on the ABE issue will lead us to start talking about more and more broad issues around tuition fees, and the lack of funding VIU gets.”

You can show your support on social media by using hashtags #adultedmatters and #bced, or sign the petition to reinstate ABE funding at dontclosethedoors.ca. 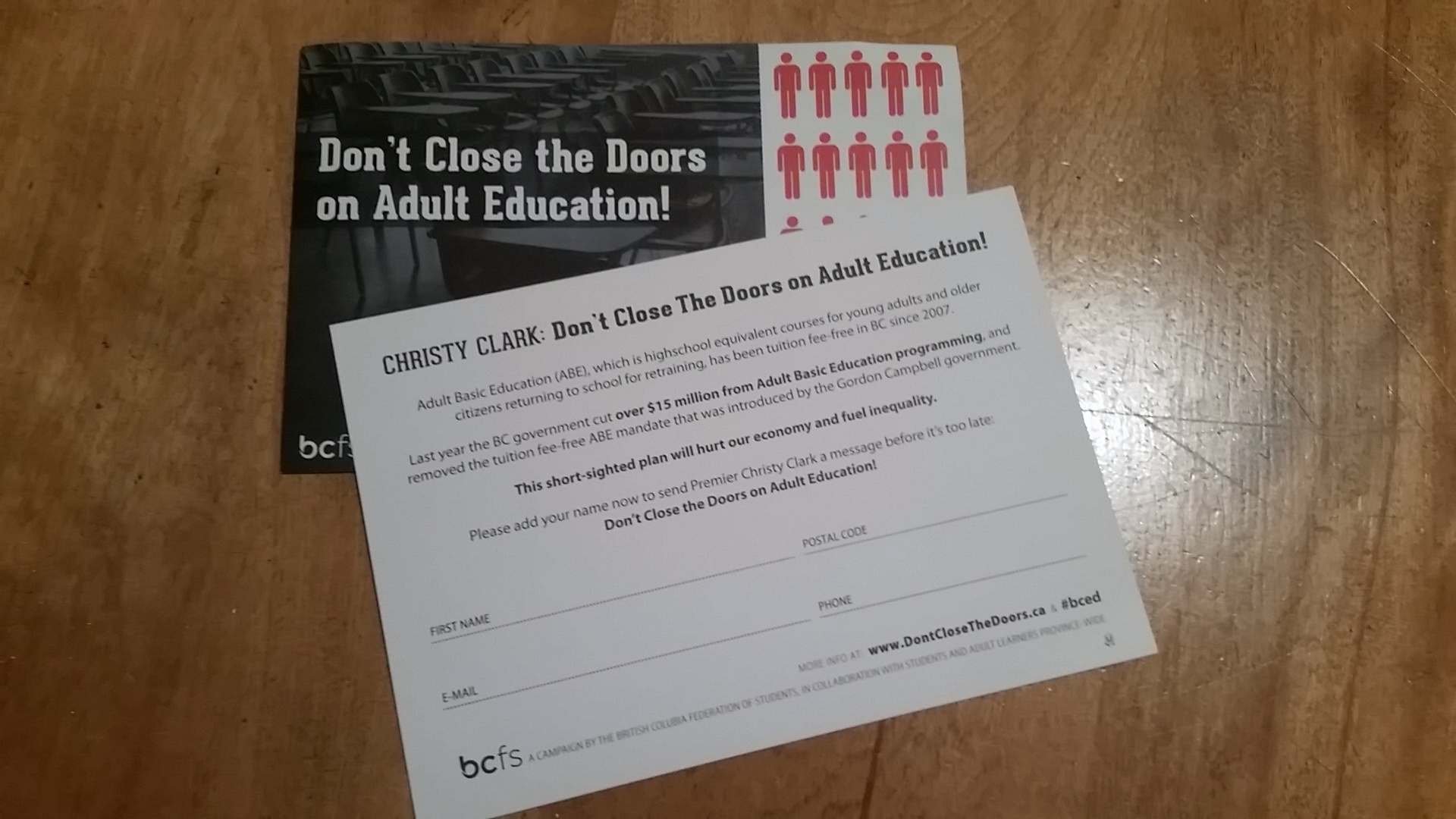