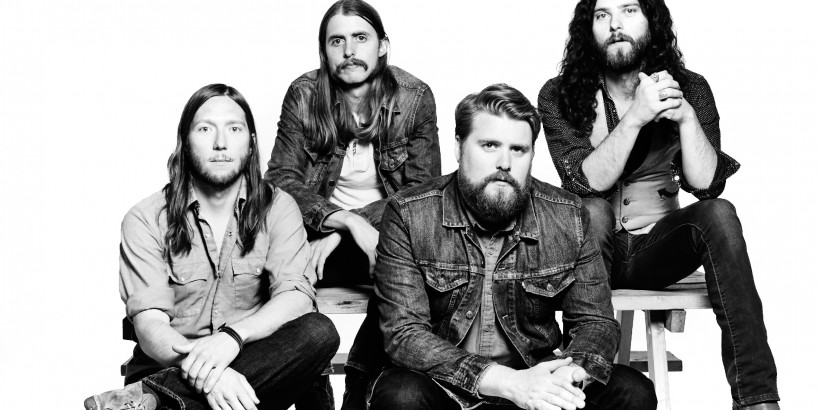 This February, The Sheepdogs will begin their Canadian tour in Vancouver. Making a stop in Nanaimo on February 21, the band is riding high after releasing their new album, Future Nostalgia, last October.

The Sheepdogs are known for their vintage-style video for “I Don’t Know,” a nod to Woodstock in 1969. The band followed with a self-titled album in 2012, receiving high praise, and comparisons to classic rock legends like Creedance Clearwater Revival, Lynyrd Skynyrd, and The Guess Who.

“Some bands try to emulate one type of band,” Gullen says. “We don’t try to do that.” Gullen says the influence comes from listening to those bands, growing up with their sound, and wanting to create music that they would listen to.

The band’s southern-style rock takes on a smoother finish in the 18-track record, which the band recorded in a rented cottage and barn on Stony Lake near Peterborough, Ontario for three weeks. Taking the chance to return to their blues rock roots in an organic way, they worked on their own schedule, sometimes recording until 3 a.m.

“We had the freedom to do that,” Gullen says, equating the experience to a hippie commune.

Intended to be listened to straight through, Future Nostalgia includes singles like “Downtown” and “I’m Gonna Be Myself,” along with an instrumental reprise, and slower, shorter ballads, breaking away from their self-titled album’s sound.

After winning their Rolling Stone “Choose The Cover” that landed them a record deal with Atlantic Records, The Sheepdogs was produced by The Black Keys’ Patrick Carney, a friend and role model for the band. According to Gullen, the pressure on the band to release a hit led them to Carney. “It was very much a partnership,” he said.

With Carney’s knowledge and influence, The Sheepdogs’ sound resonated with The Black Keys’ fans and rock lovers alike, gaining traction in their growing career as a band.

The Sheepdogs’ “Feeling Good” was played each time the Canadian men’s national hockey team scored during the 2015 IIHF World championship in Prague, creating instant recognition for the Saskatchewan band.

Gullen and his bandmates took inspiration from Abbey Road by the Beatles, known for a medley of songs, blending one into the next seamlessly.

“So much of that is listening to a side of an album,” Gullen adds, reminiscing, exemplifying the album’s contradictory name.

“It just feels more like us,” Gullen says about recording this time around.

As a bassist, Gullen says that jamming with Paul McCartney would be a dream. “Jamming with someone is like getting to know their mind, musically.”

The band’s vibe transcends their music onto the stage, known for sporting bell-bottom jeans and vintage button-up shirts. Gullen claims that this is not planned, and he wears the western style on a daily basis.

“These are the clothes in my suitcase,” Gullen says, “This is how I look everyday.”

According to his Twitter bio, @realryangullen rides his motorcycle in his “tasseled leather jacket as much as [he] can.”

Among other hobbies, the bassist built a 1950s chopper a couple of years ago, and when the four Saskatchewan boys aren’t touring across Canada and the world, recently hitting the UK and Brazil, Gullen says he and the bandmates love competing in a fantasy football league. On tours, the group can be found listening to a game on the radio, and Gullen claimed to be in the lead at the time of the interview.

Gullen says the connection between athletes and musicians is common, and that a lot of athletes that he has had the opportunity to meet are huge music fans. Gullen, as any Torontonian, is a Blue Jays fan.

I’m confused @AWCanada, how can you have a teen burger without hormones, isn’t that what makes a teen a teen?

Next month, when the band arrives in BC, they will be stopping in Vancouver and Victoria before heading to Nanaimo. Typically heading west from Saskatchewan on their tours, they try to stop in Victoria to visit Sam Corbett’s (drummer) aunt.

“[Vancouver Island is] paradise to escape to, especially when you’re travelling in the winter.”