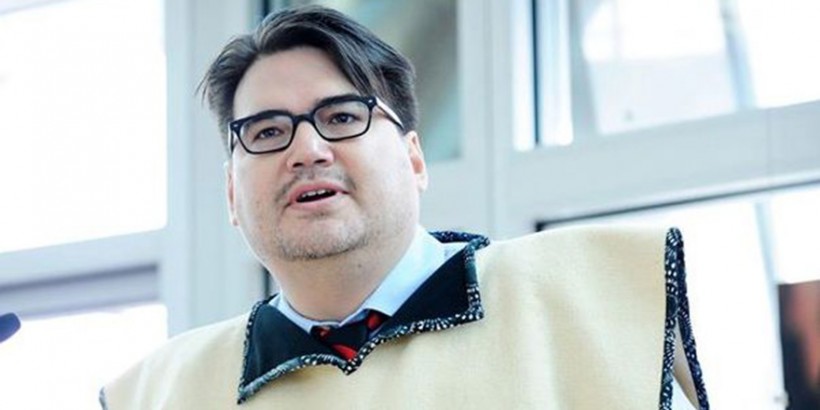 Above: Doug White via dougwhiteforchief.com

The idea of reconciliation between First Nations and non-Indigenous peoples was heavy in the minds of many people this year, and it’s one which will continue to profoundly shape our social, political, and legal worlds for years to come. After many events concerning reconciliation in the fall of 2015 here at VIU, as well as the release of findings of the Truth and Reconciliation Commission of Canada (TRC), my mind reeled with how we as citizens are to proceed. Following the mindset of the Indigenous epistemic perspective, I thought it would be prudent to more fully understand how we reached this point so as to better proceed.

The history of our Canadian societies as taught through school is a carefully chosen narrative which supports colonial ideals that still exist today. These histories generally start with European contact, misrepresenting not only this relationship, but also cloaking the rich cultures that existed on these lands prior to contact.

The Snuneymuxw, along with many other nations whom call the Island home, lived a life in harmony with the land, respected the fragile balances and rhythms of the seasons, and created cultures which reflected these ideals. During initial contact with settlers, this way of life was recognized to some extent in the form of treaties, which were developed between representatives of the Crown and Aboriginal peoples as solemn agreements that would, through the eyes of settlers, lead to the benefit of both parties.

For the Snuneymuxw, this was laid out in the Douglas Treaty, a pre-Confederation treaty which, among other things, led to the surrendering of lands, protection of others, and the maintenance of hunting and fishing rights. As Doug White, Kwulsultan, and Director of the Centre for PreConfederation Treaties and Reconciliation explains, “to understand what these treaties mean, you have to find the common intention between the two parties involved, so there is a real issue with the Douglas Treaties about the land rights.”

A major drawback of this treaty, like many others, was the difference in cultural understanding of what land means to a society. To the Snuneymuxw, and most other Indigenous nations, the land is a provider, a living being, and something we, as humans, are a part of. The idea of land ownership is completely foreign to such an understanding of the world, which, as shown through many treaty negotiations in the province, was used to benefit settler societies instigating the treaties.

Protected within the text of the Snuneymuwx treaty is the whole of Departure and Hammond Bay, a 79-hectare village site along the Newcastle Channel, major winter villages around the Nanaimo Harbour, the Nanaimo River, Gabriola, as well as villages on the Fraser River. This is a large amount of land which should have been protected forever as recognition of Aboriginal title of those spaces.

“Of all of those,” White says, “the only one that remains protected is the no. 1 Reserve, a minuscule speck on Gabriola, and a couple areas on the river. So if the rights were to be properly implemented, it would be a very different landscape in Nanaimo, Victoria, and up to Port Hardy.”

Alongside the issues of land, the fisheries surrounding Vancouver Island were, and continue to be, of vital importance to First Nations and to the land itself. These fisheries are massive living ecosystems unto themselves which make up the world-renowned biodiversity of our oceans as well as the health of our forests. They contributed in integral ways to the First Nations of the coast, as seen through art, stories, and legends. The salmon, in particular, are a keystone species to survival and culture, seen by many nations as returning relatives, a symbol of abundance and prosperity.

“[The Douglas Treaties] have some of the most expansive rights that exist in the country for Aboriginal people, allowing for the right to fish as formerly,” White says. “These are really powerful rights that have never been implemented properly.”

All coastal First Nations, including the Snuneymuxw, have fought tooth and nail to fish for food or commercially and continue not to have a voice within the Pacific Salmon Treaty Board—an international board for the allocation of the salmon—despite the recognition of fisheries within the treaties. Acknowledgment of this relationship between First Nations and the fisheries, White says, “can contribute to environmental values and sustainability aspect. An interest in fisheries is not just the right to fish in a space, nor the act of fishing, but the protection of a whole fishery. This includes the body of water, the quality of that water, and the land that supports it—we are talking about everything that is necessary to support that fishery.”

When White was first appointed Chief of the Snuneymuxw First Nations in 2010, generations had already fought for the rights to land, sea, and its survival, which seem clearly stated in the agreement of the treaty. In the 1960s, his grandfather had pushed all the way to the Supreme Court alongside Thomas Berger to have the rights of the people recognized. In the 1965 decision, it was declared that the treaties were legally meaningful and would be enforced; the Province had no jurisdiction or scope to interfere with treaty rights. White was astonished by “the depth of the continuing denial of the Crown about our treaty rights, showing that the rule of law does not apply in Canada in a uniform way, that it is in fact arbitrary.

“We talked about a more comprehensive strategy in terms of implementation of treaty rights that includes the legal as a foundation, but also political, economic, and social factions.”

It was determined through meetings between the local government and White’s council that education of the public needed to be a critical factor in restructuring our relationships with each other and the land.

“People do not even know the most basic facts of the history and geography of the Snuneymuxw people; they have never been taught,” White says. “This is a key finding of the TRC this year—that the school system and its failure to teach is the foundation of the bad relationship between Indigenous peoples and the rest of society.”

Which is exactly where I came in. We all need to re-learn that which we believed to be fact—to question a solid, un-moving idea of truth in our society. Complexities are not something that the human mind likes to grapple with, especially in terms of relationships. It takes a brave mind to be able to come to terms with the fact that this connection between Indigenous and non-Indigenous peoples has not, and will not be easy to reconcile. It is however, worth it, for a united Canadian society to be richer in both culture and humanity.

Great strides towards this have been made, from the Ts’ilchotin decision, which transformed the idea of Aboriginal title in BC; to the TRC, which helped us realize how much we don’t know; to our new federal government under Trudeau and its plans to implement the UN’s Declaration on the Rights of Indigenous Peoples.

“There is a desire to create proper nation-to-nation discussions,” White says. “Appointments of an Inuit man to Minister of Fisheries, a Kwakuitl woman as Attorney General—it cannot be understood as anything other than an important opportunity to shift into a different reality, a path to reconciliation. It will still be complicated, but at least we will be talking about things in a way that creates hope.”

White’s Centre for Pre-Confederation Treaties and Reconciliation will continue to create more opportunities to become educated on these topics, which includes working with the First Nations Forestry Council, the Leadership Council of BC, as well as counselling on the regional and national level with the Aboriginal justice system. Here at VIU we will see an annual Indigenous speaker series  through CBC Radio and the Lauriate Institute, as well as a possible restructuring of education which was a recommendation by the TRC findings, Aboriginal education and engaging with the public through lectures.