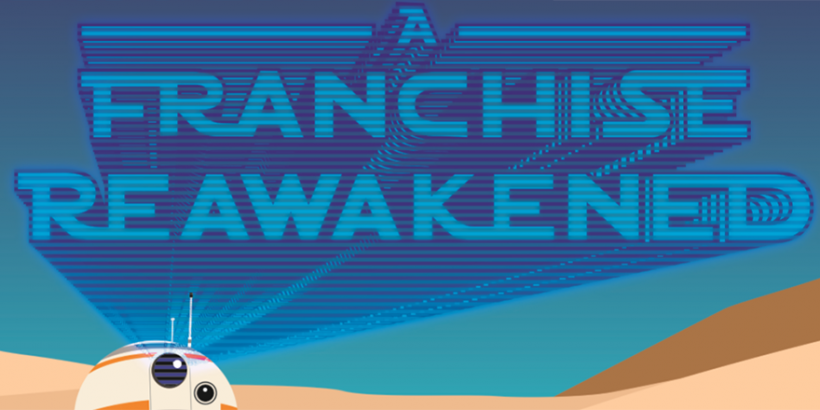 There’s simply no denying that the Star Wars franchise is one of the biggest science fiction film series in the history of film or science fiction. According to StatisticBrain.com, the films alone have grossed more than $4 billion—add that to over $1 billion in DVD and VHS sales, plus the billions made from toys, books, video games, and licensing. It’s easy to see why the series is ubiquitous, and while it could be argued that there are more important or better-executed science fiction films out there, surely none are quite as universal as this one.

Even at its worst, Star Wars has drawn an astounding amount of money from its fans, with the universally panned prequel trilogy contributing over $1 billion to the running total, despite disdain expressed from fans and critics alike. This most recent entry’s earnings, in less than a month, is staggering to say the least. Breaking box office records, and sitting at over $1.5 billion worldwide, it appears there is simply no stopping Star Wars.

My own personal connection with the Star Wars universe is not quite as strong as it is with many. I enjoyed the original trilogy from the ‘70s, and appreciated their impact and importance in the history of cinema. However, I found the prequel trilogy basically unwatchable.

My enthusiasm was awakened again earlier in 2015 with the release of Star Wars: Battlefront, which I would describe, as someone who isn’t terribly fond of playing online with others,―as a ludicrous amount of fun. It was this renewed enthusiasm for Star Wars that I took with me on my trip to the sold-out theatre to see The Force Awakens.

Directed by JJ Abrams (Star Trek), and written by Lawrence Kasdan (The Empire Strikes Back), The Force Awakens breathes new life into a series that had fallen victim to dated and atrocious computer-generated imagery (CGI), bizarrely complex political themes, and the whims and desires of a lunatic (who will not be named).

The story does mirror, or perhaps echo, plot points from the original trilogy, which may be a bit of an annoyance for people who are especially familiar with those films. Yet even with those similarities, this entry feels more like the beginning of a new trilogy than a rehashing of the original. Abrams does a solid job, as he always does, directing both the actors and the elaborate action scenes, and has stayed true to his promise of moving away from CG elements and bringing puppets back into the mix, creating something that truly feels like a Star Wars movie.

It was great to see Harrison Ford, Peter Mayhew, Carrie Fisher, and Mark Hamill reprise their roles, but it’s clear these seasoned actors have moved on with their careers. They are presented in the movie to pay some fan service, and bridge the gap between the original trilogy and this most recent addition. The problem is that it came off as fan service more than anything else, although I understand that there are genuine connections to these characters and it is important to pay some attention to where they are now.

Alternatively the characters that make their first appearances in this movie are genuinely engaging and interesting. The two leads—Daisy Ridley as Rey, and John Boyega as Finn—give fantastic performances, and have a really solid chemistry on-screen. They also represent a very progressive choice in casting—a woman, and a British-born Nigerian as leads in the same movie. While this might feel like something that shouldn’t be significant in 2015, the fact remains that it is. Having these two actors in these two roles is a huge deal both for this movie, and for future films. Both actors are charming, funny, and bring a lot to their characters. In the interest of avoiding spoilers, I will stick to broad strokes when it comes to characters and their interactions.

Also featured in the movie is Adam Driver (Girls) as the leader of the First Order, Kylo Ren. Driver is a menacing presence when he is in his full costume, and without his mask he presents a very human, if evil, character. I found him to be, easily, one of the most interesting bad guys in the entire franchise (yes, that includes Darth Vader). There are also great performances from Oscar Isaac as the likable Poe Dameron, Lupita Nyong’o as Maz Kanata, and Andy Serkis as the menacing Supreme Leader Snoke.

Even with all these amazing actors and great performances, there is one that really stands out for me: the hugely endearing droid BB-8. It’s not often that a non-human character stands out as one of the most enjoyable characters in a movie, but this little rolling-ball robot is fabulous. A great performance and an achievement in engineering that still baffles me, BB is a welcome addition, and may even be more likable than R2-D2.

Particularly noteworthy is the balance between CG elements and practical effects that Abrams has brought to this movie. The puppets and robots are great, and work well to make the universe feel alive. The scenes and sequences that do feature CG still carry a lot of weight and manage to feel very real. Everything in the movie has a presence, and you feel the size scope of the ships, the battles, and plenty of other things in a way that the prequels and all of their CG space fights were unable to capture.

The Force Awakens does a great job of blending the computer animation, and puts a lot of work into making you feel as though the alternate galaxy is real. Even the CGI characters, like Snoke or Maz, have a strong presence and feel like part of the film rather than something added later.

Seeing this movie on the big screen jumpstarted a sense of nostalgia that I didn’t have with Episode I, and there is something special about being able to see a movie like Star Wars on the big screen. Being in my mid-20s, I was unable to see the original trilogy in theatres, so this experience, for me, was significant. You can feel the energy of the fans in the packed theatre, and that is effective at pulling you into the story.

The movie is a lot of fun to see in theatres, and I can’t recommend doing that enough. If your plan is to wait it out and get in on Blu-Ray, you will be missing the full experience.

So, what else can you say? Star Wars: The Force Awakens isn’t a perfect movie by any stretch, but it’s one that delivers something new and exciting, and reinvigorates a franchise that was desperately in need of shaking up. It’s worth the time, money, and even the crowds.