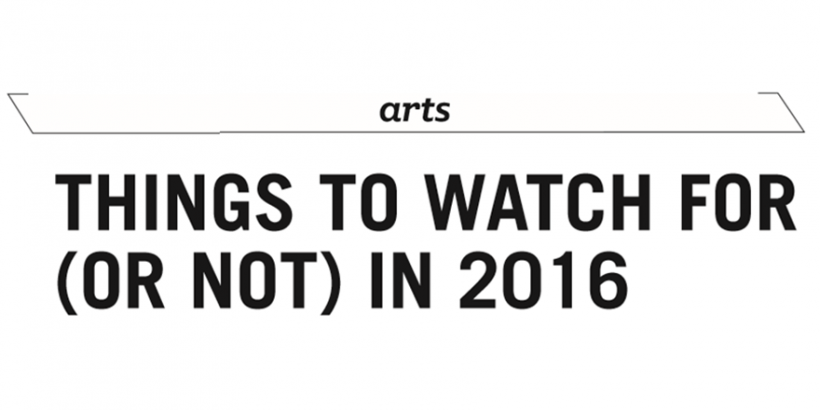 2016 will have arrived by the time this makes it to print, but at the time of writing it is still the past; how cool is that? The year ahead promises to be full of great things, so here are 10 things (in no particular order) that I am wildly excited for, and you should be too. Not included in this list are The Revenant and The Hateful Eight, which were easily the best movies from the first week of 2016.

A horror movie about witches that did exceptionally well at Sundance festival, The Witch is definitely something to get excited about. The trailer is dark, brutal, and appears to have the makings of a genuinely frightening movie. I’m always in favour of a horror movie that takes the genre seriously, and offers both compelling storytelling, great cinematography, and genuine scares. Hopefully The Witch is just that.

Director Jeremy Saulnier has proven himself an incredibly capable director. After releasing one of the best movies of 2014, Blue Ruin, and a pretty fun (if a bit stupid) horror movie back in 2007 called Murder Party, it’s easy to get on board for whatever this guy brings next. In this case, that is Green Room. His movies are brutal, violent, and stunningly executed. He’s a director to watch, and this movie should deliver more of that.

Are you one of those people who just can’t stand that the new Ghostbusters film is a cast of women? Were you also someone who freaked out at the idea of an African-American Spider-Man, or was furious about an African-American Johnny Storm? Well, you’re the worst kind of person, and this movie is going to be dynamite. Paul Fieg’s ability to make genuinely funny, female-led comedies time and time again, plus his incredible cast for this movie makes me positive that it will be a fun ride. Get on board.

Marvel has proven that it doesn’t know how to make a bad movie—even its worst offerings are entertaining and solid in their own way. The unassuming Ant Man was a joy to watch this year, and while I found Age of Ultron a big lackluster, it would be wrong to call it a bad movie. The return of characters we know, plus the addition of Black Panther and the rumoured appearance of SpiderMan is something to get excited about. We also have heroes we love fighting each other. Even as someone who isn’t a huge comic book fan, this is one I’m looking forward to.

Now, this one is not confirmed for 2016, but it’s a bit of wishful thinking. Hardcore did extremely well at the Toronto International Film Festival and, if I had to guess, it would seem 2016 will be its wide release, and I just can’t wait. This is the first entirely first-person action movie ever made, and it boasts itself a non-stop thrill ride. It stars District 9’s Sharlto Copely and is helmed by a newer director named Ilya Naishuller. Keep your eyes open for this one.

From the minds of the delightful human beings who brought the gift that is Cards Against Humanity (CAH) into this world comes Secret Hitler. This marks the first time I have ever been enthusiatic about an upcoming tabletop game, but here I am. This one has been compared to Werewolf and Mafia, both games that I’ve never played, but have heard plenty about. It appears to share a similar sense of humour that was seen in CAH. It should be a lot of fun, and thanks to its massive success on Kickstarter, I’ll be sure to show off my beautiful wooden box as well. It is set up to be the fanciest ever game with Hitler in the name.

Say what you will about Kanye West (and you’d probably be right), but there’s no denying the impact that West has had on modern hip-hop, or that the quality of his last two solo albums has been off the charts. The songs that have been released so far are stunning, and the album is due “sometime soon,” so hopefully that means 2016. [Update: Swish now has a confirmed release date of February 11, 2016.]

A band that I grew up listening to, Brand New, has consistently put out good albums—how on earth could I not be looking forward to a new album? This, like other things on the list, falls under the category of “hopefully in 2016,” because it doesn’t have a confirmed date, or even a confirmed album name yet. The first song released from the album, “Mene,” is raw and strong, and I can’t wait for the rest.

As a sucker for horror and science fiction, the prospect of a new series of X-Files is very exciting. Not to mention, there’s nothing quite as delightful as David Duchovny—although his recent debut album is something we should all agree to forget about.

While I do find the constant obsession that Canadians can have with the circus that is US politics to be tiresome and disturbing, I find myself feeling anxious for their election to just happen already. Once it happens, then perhaps Donald Trump will be forced to disappear forever, and we can stop talking about him. They run their elections for so long, and we will all utter a collective sigh of relief when the whole terrible affair is over.
Brendan