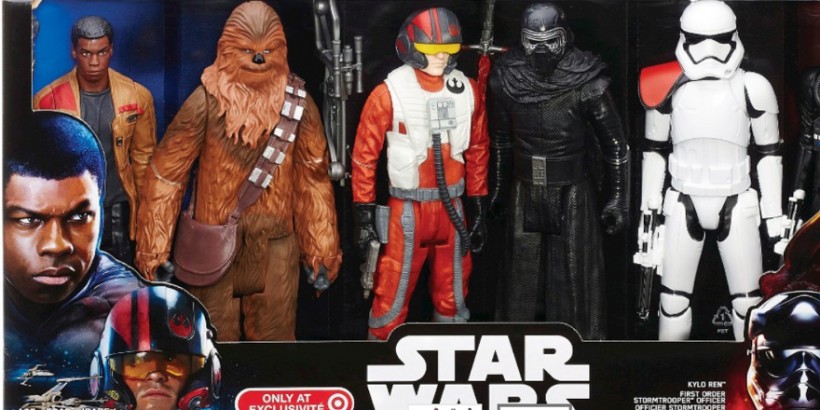 This article may contain spoilers for Star Wars: The Force Awakens. Get over it, and read it anyway.

Star Wars: The Force Awakens is now the third highest grossing film of all time. Sitting pretty at more than $1.75 billion, the movie has smashed through records and proven that the Force is strong in fans of the franchise. On top of its financial success, The Force Awakens has proven that a genre dominated by white, male heroes can flip that paradigm on its head by casting a woman as not only the main character, but also as the hero of the story. It’s easy to say that this isn’t, or shouldn’t be, a big deal, but the fact is that this carries implications for gender and the future of the Star Wars franchise, and film as a whole.

It would appear, however, that the creators of merchandise haven’t gotten the memo. Complaints about the absence of female characters in movie merchandise—particularly toys marketed to young boys—have been increasing in frequency, and the reasons given from manufacturers are spurious at best. There is no denying that, despite the beliefs of manufacturers, there are is an enormous audience of female fans for comic books and science fiction. Looking at those examples, it is inconceivable that the fans who helped The Force Awakens or even The Avengers make over $1 billion could be entirely, or even predominantly, male. Yet, when we look at the products that are so often associated with these products, female characters often get minimized or erased completely.

A perfect example of this exclusion comes from a collection of action figures sold at Target which features the main characters from The Force Awakens—iconic characters like Finn, Chewbacca, Kylo Ren, Random Storm Trooper, Random Pilot A, and Random Pilot B. All of your favourites are represented, right? The obvious issue is that Rey, played by Daisy Ridley, is the main character of the film and has more to do with the plot progression than John Boyega’s character. Now, this is not to say that she should be included instead of Boyega, but it should be clear by the other characters included that there was certainly room for her. Also excluded is Phasma, played by Gwendoline Christie, who is again absent from this set in favour of non-specific characters. Further proof of this bizarre erasure of Ridley’s character comes from a Millennium Falcon playset which features Chewbacca, Finn and BB-8, but is, once again, missing Rey despite her being the character who is most associated with the Millenium Falcon during the film.

Of course, this problem is not limited to Star Wars. Similar problems keep coming up with merchandise for films like Guardians of The Galaxy and The Avengers. Despite both films having outstanding female characters, their presence is noticeably reduced in merchandise for both films, from action figure sets that feature all of the Avengers except Black Widow, played by Scarlett Johannsen, to backpacks that feature the four male Guardians and exclude Zoe Saldana’s Gamora.

This is not to say that these toys do not exist; if you look for them you will find examples. The trouble is that many of them feature the female character on their own, and there is an obvious lack of variety and availability. Female characters are pushed aside and often marketed to girls, rather than any address to the fact that the fans of any franchise are hugely diverse and this exclusion is not something that should be written off as trivial. The implication of not including these female characters is twofold, one being that girls don’t care or want the toys anyways, the other being that boys shouldn’t have female characters present in their toys. Both of these are ludicrous assumptions, and we confirm them every time we remain silent.

Toy manufacturers and Disney have both responded to the criticism received so far. Hasbro responded to complaints over Rey being absent from the Star Wars edition of Monopoly by saying that “the game was released in September, months before the film, and Rey was not included to avoid revealing a key plot line,” which is absurd on its face. Monopoly is not played like the plot of a Star Wars movie, and including a character from the film is not a spoiler on its own. The version of Monopoly in question features Darth Vader, who is not present in the film at all, and Luke Skywalker, who appears only briefly. These two characters’ presence could act as spoilers too, but they were included anyways. Disney, in a statement given to Buzzfeed, said that “Rey figurines were held out of stores until after the movie was released as they contain moderate movie spoilers… [and] a new wave of Rey products will be available in January.”  This would suggest that it isn’t possible to adjust the merchandise to avoid spoiling, if that is the concern.

And what of the promise from Disney that January would show an influx in Rey merchandise? One article from FiveThirtyEight.com, showed that those looking for “girls’” toys on the Toys ‘R’ Us website will only be shown 17 per cent of the merchandise that has been deemed as “for girls,” while the remaining 83 per cent are shown as “for boys.” As well, in terms of numbers of toys sold at Toys ‘R’ Us, 38 feature Kylo Ren, 15 include BB-8, and only 10 feature Rey despite her being the central character in the film.

At the end of the day, there is no reason for the exclusion. It is a clear example of a real problem with representations of gender in film and entertainment. The outcry does make one feel optimistic, but only time will tell if it makes any difference.

Vote with your wallets, and always ask #WheresRey.