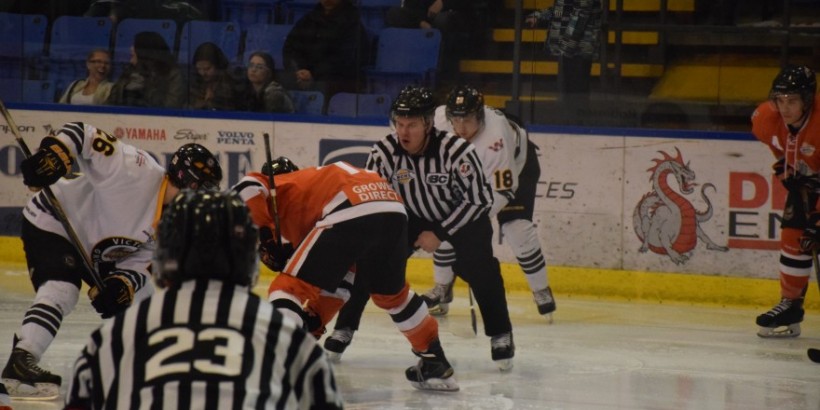 The Nanaimo Clippers were in Frank Crane Arena Friday, January 29 to face off against Island Division rivals the Victoria Grizzlies, and face off they did. The match was one of the more physically ruthless Clippers games in recent memory, and it seemed the British Columbia Hockey League’s (BCHL) officials were in over their heads.

It started as any other game might, with the Clippers taking an early lead; a Nolan Aibel slot shot found its way out of the Grizzlies goaltender’s glove and over the goal line. This is when the Grizzlies began to play their game, finishing every check hard into the boards and not being afraid to take a few shots behind the referees’  backs. A minute after the Aibel goal, Clipper captain Devin Brosseau was penalized while retaliating to a late hit on teammate Sheldon Rempal. The Grizzlies went on to tie the game with Brosseau watching from the penalty box.

With scrums after each whistle, the referees were overwhelmed, and their calls were inconsistent. Most penalties called could have easily been waved off and a few blatant major penalties, such as hits to players’ heads, were ruled as “roughing” minors or missed completely. Within a five-minute window it went from a Clippers power play, to four-on-four hockey, to an extended Grizzlies five-on-three. The Clippers somehow survived it all to immediately be put down a man again after retaliating to another late hit. The arena announcer at Frank Crane smartly called for another round of the local “school cheer off” to mask the booing and referee-heckling coming from the stands. A media timeout minutes later gave one Clippers fan the opportunity to be heard. “There’s two teams,” he yelled.

It was an hour into the game at this point and the first period hadn’t even ended. Clippers forward Matt Hoover decided to take justice into his own hands and went headhunting. He lined up a Victoria forward with a massive open-ice hit that could have easily been a charging penalty, and the crowd went wild—no penalty called. Still, the Grizzlies took the lead with 18 seconds left in the first, going into the intermission leading two to one.

The rough gameplay continued into the second period, and the officials seemed to catch onto the Grizzlies’ dirty hits, but it didn’t slow them down. Already shorthanded, Grizzlies defenseman Cody van Lierop dangerously drove Clipper newcomer Gavin Gould headfirst into the boards. Surprisingly, both players remained in the game, as van Lierop received only a two-minute boarding minor and no game misconduct for the vicious hit. The Clippers’ top line capitalized on the ensuing five-on-three with Brosseau tying the game at two.

Two minutes later, the Clippers regained the lead as Troy MacTavish redirected a pass from Sean Buchanen past the Grizzlies’ goaltender. The Grizzlies took the offensive again, effectively shutting down the Clippers’ forwards with brute force. Grizzlies’ Kevin Massey led the charge physically, demolishing Matt Creamer behind the play to the displeasure of the Clippers home crowd. Massey went on to score a beautiful goal low, short side off the post, and then followed it up with a minor penalty for boarding. The Grizzlies added another goal with two seconds left in the second—five to three for the Grizzlies.

What remained of the Clippers’ game fell apart in the initial minutes of the third. After Hoover was penalized for an honest shoulder-to-shoulder hit, Lucas Finner was called for an awful tripping penalty and frustration boiled over; Clippers’ head coach Mike Vandekamp vocalized his displeasure with the officials and was quickly ejected from the game. Barely one minute later, Massey ended his own night with another vicious headshot to Matt Hoover. The referees finally demanded order on the ice as Massey received a major penalty for boarding and game misconduct to the home crowd’s pleasure. By the time everything got sorted out again, the game time had almost elapsed three hours, and the two worn down squads played out a tame third period. The Grizzlies had an empty netter to cap off the most animated Clippers home game of the season. The Grizzlies won six to three.

The match concluded with a combined 13 power plays and 22 individual penalties, including three game misconducts.

It is entirely possible that the Clippers’ league-leading 283 penalties of the season (over 30 more than the runner-up West Kelowna Warriors) have created a bias in the eyes of the untested BCHL referees. Especially, when the second-least penalized team in the league, the Victoria Grizzlies, are the opposition. Looking at the Grizzlies’ season numbers, it is quite surprising they’d take so many bad penalties. That being said, if the post-season started today, the Clippers, with their commanding 11-point lead in the Island Division, would play the Victoria Grizzlies (fourth) in the opening round of the Fred Page Cup playoffs. With the physicality in the six to three loss Friday night, the Grizzlies may have been trying to send a message to the Clippers’ forwards—what to expect in a seven-game series—and with the added intensity of the post-season, it is common for officials to miss even more calls.

Refereeing aside, the star of the night was Victoria goaltender Mitchel Benson (#31) who fought off 44 Clipper shots and allowed only one power play goal out of the Clippers’ seven attempts.

(The following night, Saturday, January 30, in Victoria, the Clippers and Grizzlies played the second of back-to-back brawls, however the Clippers managed to capitalize on three of eight man advantages, winning by a score of 7-2.)

Tickets for Clippers’ games can be purchased at the box office at Frank Crane Arena starting an hour before puck drop. Tickets are only $10 for VIU students, and a free beer is included with admission.