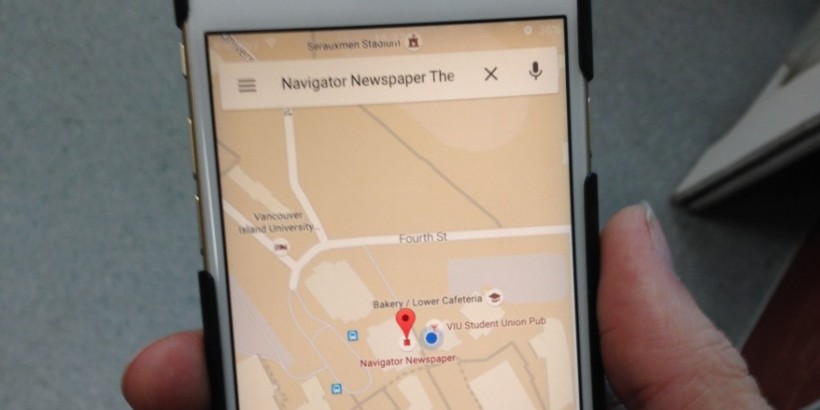 Another drizzly Wednesday night in Vancouver. My Mount Pleasant evening is winding down as I leap into my car determined to catch the last ferry of the night back home to the Island. I’m counting on a trouble-free drive, otherwise I’m stranded in the big city overnight with nowhere to go and I’ll miss my morning Media class.

Google Maps, on my phone with GPS, is there for me 90 per cent of the time—but not this time. I pull into still-heavy traffic, fumbling with my phone and barely managing to specify “BC Ferries Tsawwassen Terminal” as my destination. Nothing is working. The app is locked up and won’t recover.

Although I’ve travelled the route 100 times, I’ve never paid attention to where I was going. Each trip I just play dumb and rely on the turn-by-turn directions offered by my “trusty” GPS. With the GPS refusing to serve me this time, I’m left impotent and helpless with no idea how to get to the last ferry.

My time is cut to the wire, and panic begins to set in. I have visions of spending hundreds on a hotel (or sleeping in my car) and ruining my chance for an A in my once-per-week class. I fumble with my phone while turning left and right, or just aimlessly going straight, praying that the GPS will somehow recover, become my friend again, and save the night.

I inadvertently became caught up in a frenzy of heavy traffic leaving a gigantic stadium, and the GPS finally falls in line and guides me (at 130 km/hour) to the ferry just in the nick of time. I’m the last car on.

It’s a stormy, summer afternoon in northern New Mexico. I’m relying upon GPS to guide me from my home in Santa Fe to a camping trip in Arizona. through the heavy rain, I just barely make out that I’m crossing the dam at Abiquiu lake. suddenly my GPS tells me to turn right into the lake.

I did not listen.

I’m driving cross-country, this time in Wyoming. Distances are vast; the sky is wide open. The GPS has chosen the “best” route for me, which I assume, by default, is also the fastest. The map offers some alternate routes that look mostly like squiggly lines, and my fingers struggle to expand and contract the map using my perfect multi-touch-squeeze-technique. It’s too difficult to see much on such a small screen, so I just accept the default route.

Later, I flip to the textual turn-by-turn directions, hoping to see things more clearly, but all I see is “Left turn on 43rd St. 20 miles. Right on Broadway. 80 miles. Left on Main St.” No mention of what towns, county, state, or even country these streets are in. Finally, it dawns on me: I’m not supposed to know where I am or will be—I’m just supposed to input my destination, shut up, stop thinking, and follow the turn-by-turn directions.

I’m on a 300 mile straightaway on interstate 90 in Montana. I’m getting hungry and need to pee. Why do I have this unreasonable desire for the GPS to inform me of the distance and time to the upcoming cities on my route, so I can make an educated plan? And why do the turn-by-turn directions simply indicate “go for 300 miles” with no mention of what I am “going” over, through, or off?

I eventually became educated in my Media class (to which I somehow arrived, notwithstanding the failures of the GPS), and now I fully understand: When the explicit message is “Turn left,” the implicit message is “Think before you do it.” The media which conveys the messages are Google Maps and my phone. Together, these comprise the encoding context.

Similarly, the decoding context should be able to unwrap the explicit and implicit messages, which should be received by me, the recipient, as, “I suggest turn left, but you need to check first if that’s what you really want to do (or whether you’d prefer to drive into a lake).”

Now, on the other hand, when the explicit message is “Drive 100 miles, turn left, drive 50 miles, turn right…,” the implicit message is “Don’t think, just do it.” These messages, along with the media, comprise a different encoding context. The decoding context, therefore, needs to be different; and should be able to unwrap the messages; and they should be received by me as, “Just go where I say and don’t think about it. Make life easy for yourself. You’ll stay dry.”

Each of these examples require the appropriate decoder: Either the think decoder or the don’t think decoder. Or perhaps, even better, I could design a single complex decoder (at the expense of simplicity) which delivers messages such as, “In general, don’t think about where you are going, but specifically engage in a last-second episode of thinking before driving into a lake.”

And perhaps I need yet an additional decoder which unpacks an encoded message as, “While you’re following my directions and I make your trip simple and enjoyable, make sure to memorize each turn along the route, in detail, because next time I might malfunction”

To avoid confusion, anger, frustration, expense, and missed Media classes when using Google Maps on your Android (and probably other types of phones as well), be prepared with several “decoders” and know when to use them. And don’t necessarily expect relaxation, enjoyment, or simplicity—nor to know where you are—unless you toss your phone into a lake and travel the good old-fashioned way.