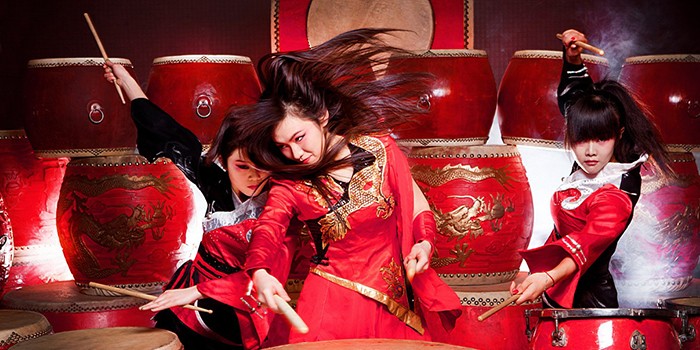 On February 5, the Port Theatre was host to the Nanaimo Chinese Cultural Society’s 2016 Lunar New Year Gala. The evening featured traditional singing and dancing performances from local artist groups which ranged from adorable to interesting and beautiful. These performances were enjoyable to be sure, but the icing on the cake came in the form of a 90-minute percussion performance of Mulan.

Mulan was performed by The Red Poppy Ladies, the first all-female percussion group in China. The ladies combine elements of Kung Fu, dancing, and fantastic percussion techniques. Utilizing everything from massive, traditional Chinese drums to fans, The Red Poppy Ladies offer something truly unique in their performance of Mulan, which they have honed in over 2500 performances all over the world. These performances have included a show at the Sydney Opera House, the Opera House of Cairo, and a performance at the closing ceremony of the Beijing Olympics in 2008.

While the show these massively talented ladies brought to Nanaimo appeared to be a pared down version of their usual show, there’s no denying that the performance at the Port Theatre was something special. The skill and power behind the drummers would offer some serious intimidation to even the most seasoned percussionist. Combined with the style and stage presence brought forth by each and every member of The Red Poppy Ladies makes for one of the most unique theatre experiences I have had in a very long time.

Each chapter of Mulan is an experience unto itself, and I found myself genuinely surprised by the different percussion instruments utilized in the different pieces. Most surprising was a number where hand fans provided the entirety of the percussion and another which utilized the sounds made by turning the lights on pretend torches on and off. Perhaps more striking than that were the visuals, using a large screen and an exciting light show that created a surprisingly epic feel to what was a relatively small performance.

The entirety of the performance contains no dialogue, with the percussion and supporting music being the focus, as well as the occasional impassioned yell from different performers, and yet the show packs a punch of emotion and intensity that proves you don’t need words to tell a story.

The only criticism I have isn’t even of the show itself, but of the person sitting directly in front of me using their cellphone at full brightness on a regular basis which, for the record, is completely inappropriate in any theatre setting. That aside, Mulan was an enchanting and almost hypnotic show, and I strong recommend getting out and seeing it should you find yourself in the position to do so.

You can find more information about The Red Poppy Ladies by going to mulanthemusical.com. You will also find a trailer with clips from the performance there.