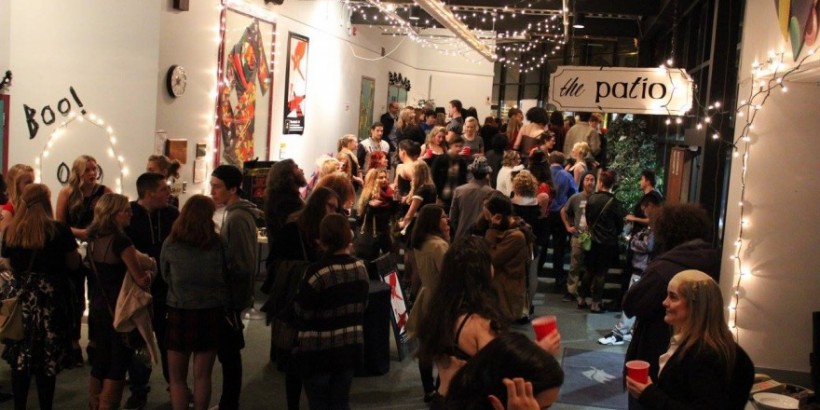 At the peak of my winter hermitdom, I was summoned from my social slumber to attend the One Act Festival at the Malaspina Theatre. A true antidote for the winter blues, the selection of one act plays were altogether earnest, heartfelt, and rousing.

From January 27 – 29 the Satyr Players hosted the festival. All five shows were original works, with a handful of local writing talent on display (including VIU theatre professor Ross Desprez). Local talent shone in all areas of production: the shows were all directed, acted, designed, and crewed by students.

Making creative use of the range of spaces available, the evening was reminiscent of a quirky Fringe festival. If you are unfamiliar with such a magical theatrical phenomena, I recommend that you begin your research on the subject post-haste. Spoiler: Fringes are known for their use of odd spaces and evocation of many giddy tears.

Each venue within the theatre was unique. Starting in the foyer and ambling through various portions of the stage and backstage area, we were ushered to each destination by Master of Ceremonies (and Satyr Players club member) Michael Unger. Conventional rows of chairs were aided by floor mats and standing room to fill each space. The division of space between audience and performers was blurred, inviting us to feel absorbed in the action of the plays. The use of small, dynamic spaces was incredibly effective in creating an enjoyable theatrical experience.

Throughout the night we were graced by a nostalgic account of a simpler technological era; a story of the existential grief of losing a friend; a playful account of the writing process amidst a flurry of distractions; the tale of a loud-mouthed and ill-fated crime family trying to regain their clout; and a scene of rambunctious, spunky elders planning a heist.

While nobody walked home with an Oscar nomination, the performances were spirited, punchy, and enthusiastic. Perhaps I wear my heart on my sleeve, but I see the performance of  theatre as an incredible act of vulnerability. Actors put themselves on the front lines for criticism and critique in the hopes of creating a temporary emotional connection with their audience. In the Malaspina Theatre, on a few cold evenings in January, those offerings were seen and well-received.

Sometimes a scene change is needed to get out of one’s comfort zone. The endearing charm of fellow students willing to put themselves out there wooed and warmed my chilly, winter-grumpy heart.