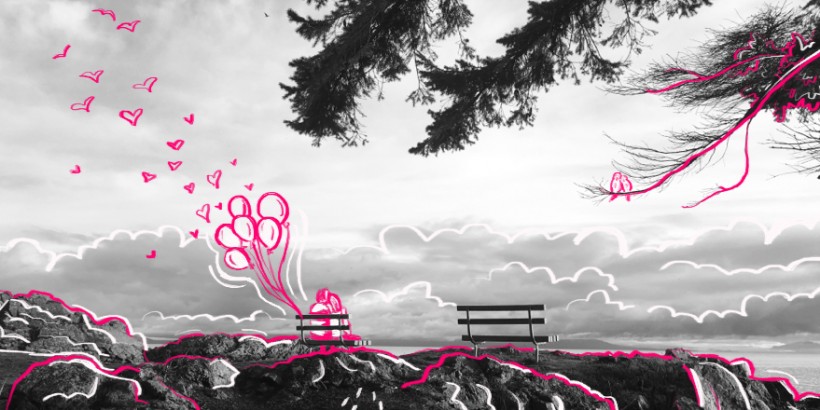 It’s the first day of February and the morning radio show is already talking about Valentine’s Day. I guess “already” is disingenuous—they’ve been talking about the date since the department stores changed from Christmas decorations to candied hearts. I’m in the car on my way to Neck Point Park—listed in the top three of “Things to Do in Nanaimo” according to Trip Advisor, and what one user called their “favourite park on the Island”—and the weather is as gloomy as a late winter morning gets without spilling buckets of rain. The sun has only just hobbled out of bed on the crutches of thick clouds, and I know the first thing my girlfriend wants is a picture together in front of the blotted sunrise by the boathouse to add our captured souls to the myriad of filtered #neckpoint photos on Instagram. But in the aged cement beneath our feet, we find something else to photograph: the first of the many scars of Neck Point.

In June 2009, as part of a plan to expand and upgrade Neck Point Park, the City of Nanaimo purchased 1.7 hectares of private land, including a boathouse lookout and its concrete perimetre. According to the Neck Point Master Plan in 2010, the park was closed to the public prior to the completion of said upgrades—included in which were renovations to the boathouse and its surrounding concrete slabs to better facilitate weddings. At some point, likely in the middle of the night, April and Chris snuck onto the property dressed as raccoons and clawed their names and adoration into the wet concrete, leaving their love imprinted like a hickey on Neck Point.

April and Chris had the right idea—a quick Google search for “what should I write in wet concrete” leads to the response “you and your partners’ initials, in a heart… Never goes out of style.” The cavemen drew and carved into stone to tell stories, Michelangelo saw beauty in etching rocks, and likewise Sappho is immortalized in a marble bust. It doesn’t matter if concrete consists of mere chemicals and aggregates—the same principle applies. There may be 63 Nanaimo-based women named April on Facebook, and we may never know if her love for Chris will last as long as that stony impression, but each time someone notices that slab beneath their feet at Neck Point, while the boats beat on against the docks across the harbour, an idea will form—a dream, a memory. I don’t recall a Chris, but I do recall an April—the month of cherry blossoms and first kisses. As much as inscribed stone tablets tell us the memories of the lost, they inspire ideas of what could be: Love.

Memorial benches pepper the salty coast of Neck Point. The late Otto is said to have sailed his own race. Karl is flying with the eagles. Andre offered sweet memories. And Larry probably would have liked it, whatever it may be. The benches each overlook the various points of interest throughout the park, from the “toughest place on Earth” (where each pebble on the shore has been smoothed by the tide into stones like wet silk) to “a place to rest” looking out over Last Beach. Some of Neck Point’s scars are concrete. Others are spectral.

Sitting perfectly adjacent, a taut arms-length apart, and atop a grassy bluff are two benches of loving memory. To “share their joy of [the] view” reads a plaque on one. During the day, the view is the epitome of serenity; a vast, stretching horizon of breathing waters and the foggy reflection of the sun and nearby islands. On the rare night, dipping your toes in the sea might cause an awakening; the phytoplankton, single-celled and sensitive to agitation, glows a neon-blue when touched—“phosphorescence” to some, “bioluminescence” to others, “otherly” to the rest. The response of the phytoplankton is almost conscious—a chemical activation that could be mistaken as fear, or excitement, or an attempt to say something—possessed.

Even in solitude, there is no loneliness where there’s love.

At Neck Point Park, you can’t pass an arbutus tree without seeing the initials of some star-crossed lovers scarred into its fleshy-red bark, no matter it trunk or branches or root. The arbutus gets its attention for how unique it is; not only is it native to just a sliver of the world—our temperate north-western coast—but its bark is unique in that it’s redder than a cedar, and softer than a birch. Here are less than three facts about the arbutus:

In all of its oddities, the arbutus stands out in the late-winter season as one of the only trees still bearing colour, and as such remains traditionally romantic year-round—an easy choice when deciding where to etch your name, such as L and R did below:

There are only two possible readings of the markings above: L (henceforth Len) and R (Rita) are time travellers. Or, they are not. My vote is on the former and here’s why: August 10 is due to be a half-moon, but if you read the date as October 8, it’s due to be a half-moon as well. One half-moon plus one half-moon equals one full moon. Now, look at the initials: L for “left,” and R for “right.” If you put together a left and right half, you get a whole. Now, what happens when you combine two wholes? The Singularity. The end of mankind. And it’s only further confirmed when you look at the 10. Do those numbers look familiar? They’re the components of digital binary—the underlying code to Instagram algorithms and our AI overlords.Now look at the 08. Flip it on its side and you have infinity divided by zero. Rest in peace, universe.

Now, I know what you’re thinking: “Oh, it’s probably just a save-the-date. Len and Rita aren’t from the future at all.”

That’s where you’re wrong: theknot.com explicitly lists October 8 as a wedding date to avoid. Len and Rita would never make such an amateur mistake. They didn’t just leave a mark on an arbutus tree, but a scar on the very fabric of space and time for the love of the human race.

I lower my phone after taking the final photograph. I see it now: the scars of Neck Point are all ripples through time—captured and frozen memories of past love, current lovers, and lovers from the future. Len and Rita were trying to warn us. The hashtags keep us distracted. We upload our information and forget about the scars. Others, and our own. They’re everywhere—the scars of love are what make our world what it is and us what we are: