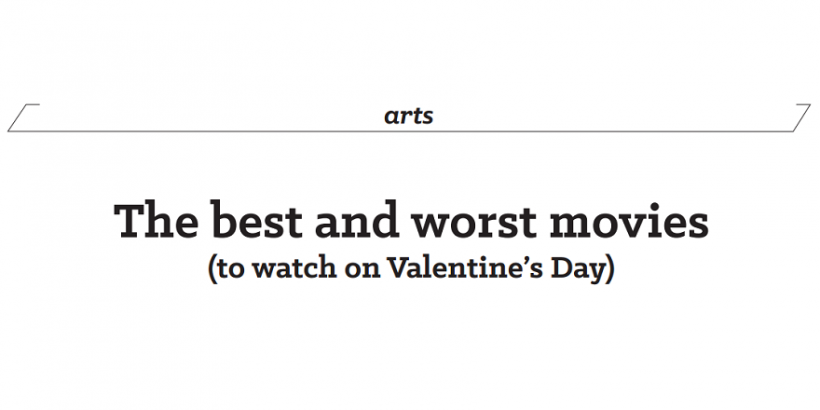 This exceedingly charming romantic comedy comes chock-full of some of the best actors that jolly-old England has ever given film. With performances from Martin Freeman, Emma Thompson, and the late Alan Rickman, you’re sure to enjoy at least one of the many intersecting stories this movie offers up. While not the biggest fan of romcoms myself, there’s no denying the charm of this one. If you’re looking for something brimming with hopeless romantics, then you’ll love this one.

I would hesitate to call this a musical, but that’s probably the simplest way to put this, as there are live musical performances in the movie. It’s a wonderful, musical love story starring Glen Hansard and Marketa Irglova. It’s a straightforward narrative, but it’s the soundtrack that sets the movie apart. Beautiful songs and amazing talent make this a really great watch.

Perhaps one of the stranger ones on this list, but if you’re like me then sometimes a romantic evening involves a horror movie. There’s something great about putting on something frightening and curling up. This one is a genuinely frightening ghost story, and will make for a good adrenaline rush. Frightening, intense, and disturbing, The Conjuring makes for a hell of a date movie.

Something a little bit different, but still a love story. Scott Pilgrim is bright, colourful, and bursting with energy. Directed by the spectacularly talented Edgar Wright, and starring Michael Cera and Mary Elizabeth Winstead, this movie is an absolute blast. It’s a quirky and unique love story that takes on the deepest of our fears: that our significant other’s exes are super heroes.

No, I’m not putting an adult film on the list, though this is definitely best viewed by adults. This Canadian comedy has a lot of heart, and presents the characters’ relationships in very real ways. It’s one of those rare movies that acknowledges that people have sex, that sex looks different to almost everyone, and that it’s a complicated and wonderful thing. It’s a genuinely funny and believable movie that I recommend wholeheartedly. Give it a chance.

I can’t for the life of me figure out why people like this movie as much as they do. To be sure, the relationship that Ryan Gosling and Michelle Williams build is quite sweet, but it’s the complete breakdown of the relationship that makes this a hard watch. Personally, watching a couple self-destruct and treat each other like garbage really doesn’t do much for me. It’s a bleak and unpleasant movie, which will certainly put the hamper on any genuine desire to start a relationship.

A bleak movie about addiction, to be sure, but there is also a love story here of the most tragic kind. Jared Leto and Jennifer Connelly have a horrific, codependent relationship between themselves and drugs. On top of that, the movie is brutal and harrowing to get through. The soundtrack, slick editing, and fabulous direction make this a must-watch movie, but an absolute date-ruiner.

Perhaps a documentary of any kind would be ill-advised when it comes to date movies, but this one would be a particularly bad call. Dear Zachary tells the story of filmmaker Kurt Kuenne as he works to memorialize a murdered friend for the son he will never get to meet. What happens to Kurt along the way is simply one of the most heartbreaking stories that I have ever seen on film. I’m happy to admit that movies make me misty or emotional from time to time, but this one was the first to make me weep. Avoid this as a date movie at all costs.

A horror/dark comedy about a teenage girl who learns that she has teeth in her vagina. I feel like, based on that information alone, you can figure out why it’s on the “bad” list. That said, if you and your date, or you on your own have a good (read: twisted) sense of humour, then this one might actually be perfect for you. It’s a unique and self-aware movie, but not one that is going to help anyone kindle their romance.