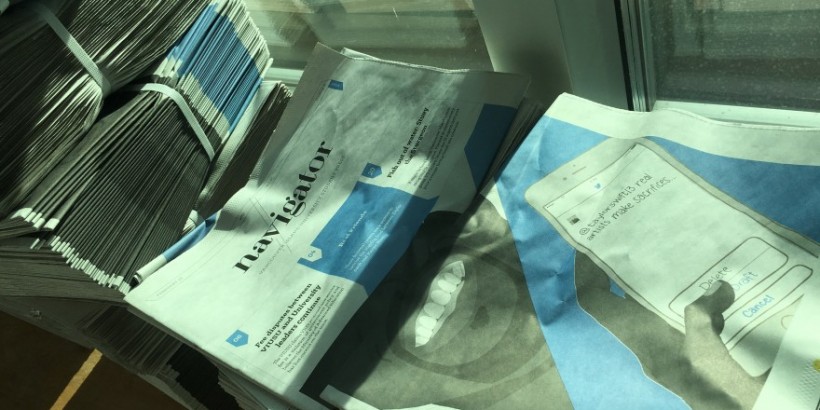 Before many journalists make it to the newsroom, their careers begin at university campus papers. As women still face hurdles when it comes to equality in the workforce, campuses across Canada are proving that women studying journalism have a better chance of success in the field before they graduate.

Emma McPhee, Editor-in-Chief of the Brunswickan, made her way through the ranks of the UNB newspaper, beginning as News Editor, and working with a variety of female and male journalists on the masthead. This year, her section editors are all male, with the exception of Copy Editor.

When it comes to insecurity as an editor, McPhee says she never feels that her relationship with her editors is negative. It is, rather, her own self-doubt, and the struggle in how to use her weaknesses as strengths.

“As a more soft-spoken person, I try to use that to my advantage,” McPhee says.

Small in stature, McPhee says she could pass for a young teenager, and says that when she was News Editor, many of the senior administration at the university saw her as “less of a threat,” which created a relationship between the communications department and the paper.

This year, even though her News Editor continues to work with the admin, they are much more responsive to McPhee when she joins him at an interview. “They thought they’d have more luck with me,” McPhee admits.

McPhee feels that a newsroom filled with mainly male writers does not affect the way she runs the editorial, and that the change from the previous year where it was the opposite—male Editor-in-Chief with female editors—was solely a result of who applied for which job.

In 2014, Bronté James was one of the women on the Bruns masthead as Sports Editor. She used the opportunity to open up a conversation on the lack of respect given to women writing sports in a tongue-in-cheek article: “You’re a woman and a sports reporter?!”

James has a strong interest and background in all sports, and uses humour in the article to bring attention to sexism in genre-based journalism.

“It seems natural to have men in sports, but women are always questioned or ‘congratulated’ for making it,” James says, “as if it is some sort of high aspiration.”

Since completing her BA in Journalism at St. Thomas University—on the same campus as UNB—James has worked at four newspapers, including the Calgary Herald and Fredericton’s Daily Gleaner, and three radio stations in Calgary and Fredricton as well.

University papers differ from national publications because the competition for the top spot is much less rigorous, and the opportunity to showcase your abilities is much more inclusive, as staff is transient and changes year-to-year. At the university level, journalism is much more about the experience rather than ascension and promotion.

As Canada’s oldest official student publication, dating back to 1867, the Bruns has a scattered history. In 1922, the “students’ magazine” only had a smattering of female writers and editors. In 1939, according to the UNB library website, the paper was taken over by female students during “co-ed week,” publishing the first edition of the paper not largely written and edited by men.

UNB does not offer journalism classes, but McPhee, who is completing an honours in Archaeology and the Classics, says that she may pursue journalism in her graduate studies.

“She knows news, and how to find the core of a story,” James says about McPhee.

Of the 16 staff at the Phoenix, 11 are female. Barberis believes that it is imperative to have women in the newsroom, but also finds herself wanting more males to add perspective. This openness to diversity and equality is common at smaller papers, like university publications, where writing skills and talent—not gender—are the chief criteria for hiring.

“It has been eight years since the Phoenix has seen a female Editor-in-Chief,” Barberis adds. She proudly admits that this is the first year the publication has run without a deficit, and is set to run a surplus.

Both the Brunswickan and the Phoenix newspapers fall under The Canadian University Press’ umbrella of over 40 student publications, and have print runs of four thousand and two thousand respectively. Each school has under 15 thousand students, and successful and modern campus papers looking for fresh ways to provide content for their student body.

When it comes to workforce-entering millennials, social media is a crucial tool to integrate into daily life and the now-changing face of journalism.

“We are trying to boost our online presence,” McPhee says. “Our Multimedia Editor is taking that on as an initiative.”

Barberis sees that most news is “digested through a digital means” and thus created a new position of Project Manager at the Phoenix to increase engagement with readers online.

“I think it plays a huge part,” Barberis says.