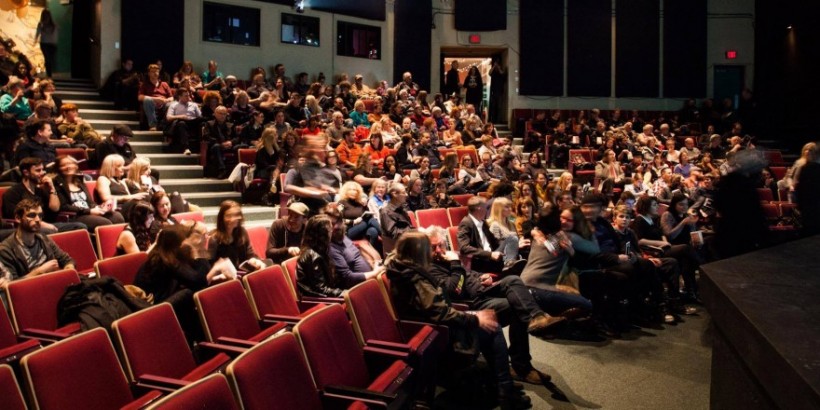 Above: The audience at VISFF via the VISFF Facebook page

February 13 marked the 11th annual Vancouver Island Short Film Festival (VISFF). Thirteen films screened, 12 of which were filmed in BC, and four of those from Nanaimo. A wide variety of films were shown, many of which were drama, with dabs of comedy, and even a dash or two of horror.  I attended the Saturday evening screening, the final show of the festival, and I was really pleased to see what appeared to be a full house.

Overall, the films each showed an exceptional amount of technical know-how, and there were some genuinely beautifully shot projects on display. Most notably, at least for me, were the cinematography in Moth, Lost, and A Late Thaw. Beyond simply using nice cameras, these films showed particular skill in their execution and kudos should absolutely be paid to those filmmakers.

A Late Thaw, in particular, was one of the most visually interesting pieces in the entire festival. The film told the story of Tara, whose partner finds a beautiful house for the two of them to live in, which then triggers memories of a previous partner who died during a mountain climbing incident sometime in the past. The execution of the story wasn’t my favourite, but the visuals used in the film were stunning and very interesting, particularly the scenes in which snow fell in the house as Tara explored.

For me, the best film had to be Kindergarten: Da Bin Ich Wieder, which told a complete story, along with being well-shot and well-written. As I mentioned in my previous review of the film, it is a bright, colourful, and funny short. Also noteworthy was a short from Vancouver called The Home Show, which was the shortest of the lot and a parody commercial for an HGTV show called “Un-F*ck This House,” a show that rescues “victims” of home renovation shows. Short, sweet, and hilarious, The Home Show ticked all the boxes for me.

Story development was a struggle for several of the films. Many of the films pushed stories into 15 or less minutes, which needed a considerably longer amount of time to be told. It seems to me that many of the stories were part of something larger, more like a one-act play than a short film. While some did have a three act structure and communicated a complete story, many ended abruptly or relied very heavily on exposition, feeling more like a scene in a film than a stand-alone piece. I expressed similar concerns in my review of festival short Sweet Dreams, Norma Jean and much of the same criticisms apply.

Another issue that arises with a lot of low budget films is the use of effects or techniques that filmmakers aren’t able to pull off with their budgetary restrictions or limited experience. A perfect example comes from the horror piece Mind Game Demon, which features a large, plastic, pre-bloodied knife. There’s nothing wrong with working within your budget or technical knowledge. Fabulous films have been achieved with very little or no effects at all. If something doesn’t look right on camera, it doesn’t have to stay in the film, and you may find that the end result is better for it. There were other nit-picky story things that time could be spent on, but really, I am thrilled to see so much hard work and passion on display at the festival.

All in all, it’s reassuring to see so many people with a drive to make movies, and such a diverse selection to boot. While there’s always more work to do and more growing to go through, it’s encouraging to see people work so hard to produce these films. Also encouraging was the audience turn out; seeing people continue to support the arts community is always a positive thing. Congratulations to all of the filmmakers, and it will be interesting to see what next year’s festival has in store.