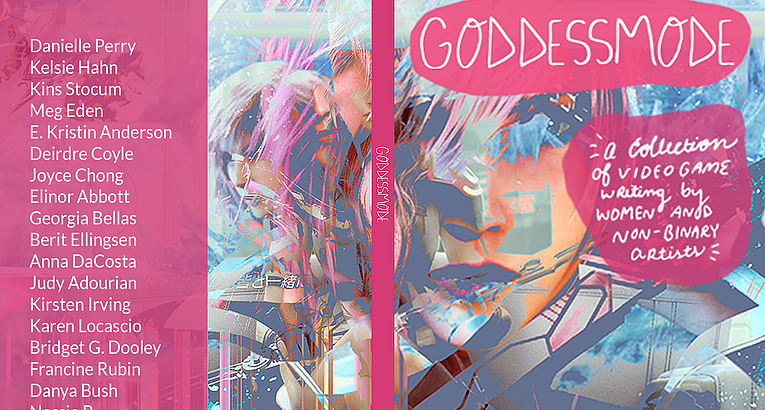 When I played role-playing video games as a kid, the characters I would make were all the same—game-appropriate, slightly better-looking versions of me. Video games were a power fantasy in a normal life of feeling ineffectual and useless, and watching my avatar complete grand quests I could never dream of navigating in real life became part of the experience of gaming for me in general. At a certain point, though—probably around the age of 19 or 20—I got tired of looking at white dudes as the protagonists of my video games. My player characters shifted from long-haired wizards and fighters to determined, usually anime-hair-coloured konoichi and no-nonsense, assertive space pilots. In a world filled with narratives by and about men, it just seemed to make sense to take a small step against the constant flow of patriarchal narrative.

Goddessmode, a collection of writing about video games from female and non-binary writers, published by Cool Skull Press in 2015, is the literary equivalent of a female character creation screen. While a lifetime of stereotypes has taught us female gamers don’t exist, here we have an entire volume of poetry, prose, and non-fiction straight from the mouth of every video game heroine we never took the time to listen to.

The writing in Goddessmode is more than confessional from girls in front of Playstations though; because video games were, for so many people in the last few decades, a companion to growing up and reflections on those games often lead to reflection on who we were as people when coming-of-age and pixels met each other. In “Post-High School Reality Quest,” Meg Eden uses the cumbersome syntax of a text-based adventure game to relive the experience of her high school graduation, the sensation of incompetence surrounded by a world of interactive things but with no willpower to influence any of them. She tells us that a long youth in bible school has made her “eager for the alleged freedom of college // And freedom not just from rules, but freedom from people… who are “your friends” only because of your small school population. Because everyone has to survive somehow, and it’s dangerous to go alone.” The quotes and allusions to video games buried throughout Goddessmode are tidbits for gamers to notice and enjoy, but also beautiful reappropriations of youthful emotion funnelled through the words of a pixelated safe haven. “You’ve never reached the end of anything before,” Eden writes. “All of the cartridges and discs in your room, you’ve never finished any games, never won any of them before.”

Beyond the direct and confessional, the writing in Goddessmode spans a variety of styles and perspectives; E. Kristen Anderson provides four erasure poems from old issues of Nintendo Power, summarizing the adventures of Samus with “Enter. // Use every item / in the darkest corners of caverns… / Vertical? You’ve only scratched / the surface, dangerous. // Remain. // Make a map as you go.” It’s worth noting that despite her fairly asexual-looking space suit, Samus (from Metroid) is one of the first female video game protagonists—a point of view from a woman inside a controller shoved into a man’s hands, most often.

Goddessmode also does an excellent job of varying the perspectives and styles of its writers by jumping from erasure poems and the confessional stylings of Danielle Perry’s “I guess it helps my anxiety to pretend to be an elf” to Elinor Abbot describing the female revenge fantasies she discovered in the newest Tomb Raider, and how Lara’s new world and design make her the instrument of retribution to strike back at the patriarchy. “You’re about to become an avenging angel (and haven’t you wished to be one for so long?) / They’re going to come after you with guns and knives, with needs and bargains… and here, in this digital world…you can not only resist, but triumph… You don’t need to feel sorry for enjoying it. You’ve been sorry long enough.”

There’s no one style of writing in Goddessmode that dominates. Like the perspectives and authors included in the anthology, the stories about youth and technology are rendered in every form imaginable—a mother scrapping for an arcade high score against her son in Asteroids, an interview with video game icon Ms. Pacman, and the thoughts of someone in a room with their anxiety and sadness and a controller and a world claiming they don’t exist. If nothing else, Goddessmode is an excellent anti-matter harpoon against the “gamer girl” white whale floating in the collective unconsciousness—and, while it might not need saying, giving voices to women in the sphere of video games and their conversation seems necessary more now than ever in light of #GatorGame and all its idiotic conjecture about how women are supposed to feel in regards to video games.

Like previous titles from Cool Skull Press, Goddessmode has an instant in for anyone who has ever played video games and wanted to read poetry or other writing about them—but more than that, because video games are rapidly becoming a part of the cultural history of generation after generation, here we have a commentary from the maligned and mistreated second half of humanity, funnelling all the sexist displeasure and feminine identity through the lens of a common interest, drawing us to our televisions and computers to escape the reality we must exist in for most of our lives. Goddessmode is worth reading not just if you enjoy video games and the voices of marginalized authors, but deserves a look simply for being one of the first volumes of writing ever to represent such a normally voiceless demographic. Goddessmode is a cheat code for escaping the patriarchy, and hopefully one we can leave on until our next reset.

The poetry of online restaurant reviews