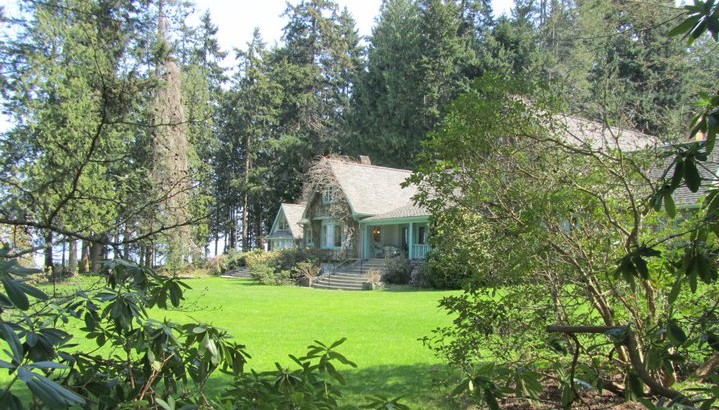 Above: Milner House seen through the branches in the early spring.

Looking for a way to give your brain some sweet release in the natural world? Look no further than Milner Gardens, which is an extraordinary combination of ocean, Douglas fir forests, and charming English gardens.

Acquired by the Milner family in 1937 (originally established in 1931), the 28-acre estate has a rich history of being inhabited by British aristocracy and being visited by numerous members of the Royal family, including Princess Diana and the Queen Mum herself in the ‘80s. Ray Milner, the property’s second owner, married Veronica Milner in 1954, which started the gardens onto its path of becoming one of the most beloved places on the Island. Veronica was an avid horticulturalist, helping to found VanDusen Gardens in Vancouver as well as the Royal Horticultural Society, and was a fellow of the Garden Conservancy. She had an incredibly artistic eye, which she used to paint her surroundings, filling the property with a variety of colours and textures.

She spent her life with Mr. Milner, travelling in Canada and the world—a journey evident in the variety of plants she collected along the way, which totals more than 500 species of trees, shrubs, and flowers. Some of the most spectacular specimens include the nearly 100-year-old rhododendrons which reach for the sky on long, naked branches and droop with flowers in the late spring. Geoff Ball, Executive Director of the gardens, loves the springtime, “when the garden has a sense of eruption and rebirth of another year.” Ball also says that beyond the cultivated garden, the marine ecosystem is coming alive through the herring spawn, which attracts thousands of seabirds to the area.

Veronica’s management of the gardens was her obvious love of naturalization. Rather than planting “annual” plants, which would need to be replaced year after year (in what she called “garden graveyards”), she chose bulbs which would naturalize in grass and gardens alike, and perennials which would return again and again. This would make an environment which, she felt, “would be a place of serenity, elegance, rhythm, and harmony, in tune with the Infinite.”

The serenity she so desired is mimicked in park-like settings of elegant trees and grasslands, inlaid with bubbling brooks, ponds, and fountains. Ball states this atmosphere has been added to over the years through various efforts and opportunities, such as a bulb-salvaging endeavor which added to the hundreds of bulbs which already existed. Visitors can now see Ball’s favourite spring flower, the snowdrop, which is blooming in massive banks all over the property.

The gardens may have been loved through cultivation, but the forests were loved through leaving them be, preserving the old and second-growth stands which surround the estate. Underneath the towering trees, a tumble of native species blankets the ground through which many trails wind, allowing guests to walk and observe this gem of unspoiled forest. This makes the park a very rare site, as many of these forests have been lost, and only two per cent of the Island’s old-growth Douglas fir remains.

When VIU acquired the garden estate in 1996, it was gifted with a new life, allowing people of all ages to learn about the natural world. The property is now part-time home to the VIU Horticulture program, allowing students to gain first-hand experience with their studies in landscaping and plant identification. It is also the home of Shoots with Roots, an intergenerational gardening program which works in association with Qualicum Elementary and many day camps to provide a horticulture knowledge base to the next wave of (hopeful) enthusiasts. Each year, approximately 300 children visit the gardens to learn about agriculture and food production for the backyard. There are many learning opportunities for the wider community as well, with courses being given on botanical Latin, herbal medicine, lawn alternatives, and beneficial insects.

Ball stresses the psychological benefits of visiting the gardens: “For students, it is especially important to have a place that is very restorative and peaceful during midterms. This is a very positive and grounding place.”

Milner Gardens is open every Sunday, from February 14 to March 20, 11 a.m. to 3:30 p.m., and offers the opportunity to see the plethora of bulbs and spring flowers which cover the grounds like a blanket. The Milner House, which is also open for the public to explore, serves tea, and lets you sit back and take in the stunning view of the ocean and coastal mountain range. On March 25, the Gardens open again for a special event—the Bunny Trail, a winding tour of hidden rabbit treasures around the property. After Easter, the garden will be open on Thursdays and Sundays.

Admission is free for VIU students with student ID.