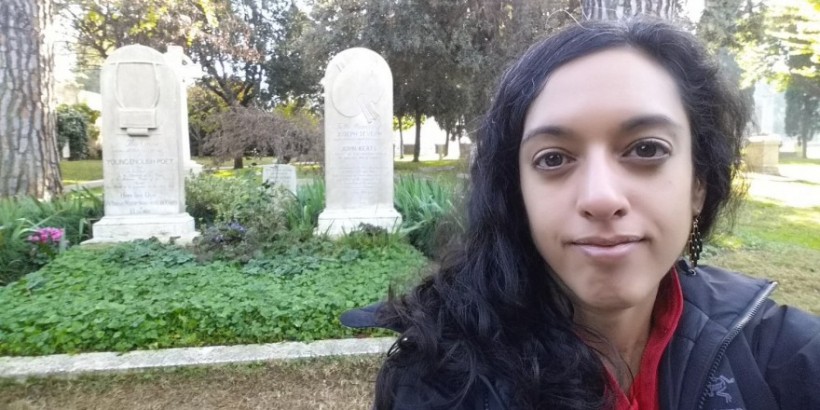 Above: Dr. Sonnet L’Abbe in front of poet John Keats’ gravestone on the anniversary of his death. via twitter.

“My parents did it to me,” says Sonnet L’Abbé, poet and Creative Writing professor, at a faculty reading at VIU. She opens with a story about her name, because she knows it’s the first thing she’ll be asked.

But L’Abbé was not born a poem, and, despite being born in Toronto, she was not necessarily born a Canadian either. She was born to a French-Canadian father, Jason, and a Guyanese-South Asian mother, Janet, both of whom took the ends of their names and put them together, not for a love of poetry, but because someone they knew had named a boat that way.

L’Abbé was not born into poetry, and, just as well, her relationship with her Canadian identity has been fraught.

“There’s only one culture I’ve really been forced to answer for my whole life,” L’Abbé says. “Nobody’s going around and saying, ‘you look French-Canadian.’”

It was in the ‘70s, when her age could be counted on just one hand, that L’Abbé realized her struggle with identity. Her and her family’s accents and skin tones seemed to dictate the attitudes of others towards her. As far back as her earliest memories, L’Abbé recalls wondering why she had the parents she did, and why they were the colours that they were.

“I just hated that. I used to be like, ‘but I’m white,’ you know—if I’m half-white and half-brown, why am I getting this shit-kicking?”

When L’Abbé decided she wanted to write, she didn’t want to be known as a “South-Asian-Guyanese-Black-Canadian writer”—but grad school professors enticed her to write about ethnicity, and her first book of poetry, A Strange Relief, employed much of her pent-up frustration. Today she looks at her identity more “strategically.”

In some ways, I was just trying to please people when i just started out [writing]. And then I was just pissed by the end of my first book, like, “What just happened here?” Who did I just please? What did I prove?

I was old enough by that point that I had enough experiences to look around me and say “shit is not fair.”

I know I was raised to not to see colour, etcetera, etcetera, it doesn’t matter. But something about that is not working for me—it’s not describing my experience.

There’s still a lot of fucked-up-ness about it [my writing], but I’ve reached this age and this point in my career, and the world around me seems to need and want someone who articulates themselves around these issues. It’s almost like being a poet; I did not set out to have that kind of expertise, but when I hear other people struggling to articulate themselves around these same issues, then I realize I know what they’re saying.

it’s like when you’re teaching a young writer and you know what they’re going to say, and you’re like “Okay, draw it out this way, talk about it this way.” I see that going on around me.

So, fine. I’ll keep talking about it.

After publishing A Strange Relief, L’Abbé began her teaching career, first at the University of Toronto, and then at UBC-Okanagan up until last year. Last fall, L’Abbé was hired on contract to teach Creative Writing and English here at VIU, where she has been put in charge of all three Creative Writing poetry courses, as well as an English 115 course.

Last month, L’Abbé says one of her students brought chocolate cupcakes to class. She took one and ate it with her coffee. When she saw the same student later, he offered her another, and she took that one too. But not all students are candy and sprinkles; L’Abbé says that she has found her teaching has changed over the years, and that she has had to become a “harder ass.”

“I’m going to be very careful with knowing what I’ve said,” L’Abbé says. “I find people will say to me ‘you never said that,’ and I’m like, ‘I’m pretty sure I said that.’

“The first couple times I was like, ‘Am I just tired? Am I losing my mind?’ So recently I’ve been much more methodical about what I say, and there’s still people saying I never said that. So now I know, okay, this is going to be a thing.

“It’s already a lot of work; I don’t need to be feeling gas-lit,” L’Abbé laughs. “I’m bitching about it, but at the same time I’m learning and I’m building my own skills. I’m going to take everything you do and apply it to the politics of navigating work.”

L’Abbé will take the chocolate cupcakes, and muffins too: “A great deal of my happiness comes from chocolate chip muffins,” she says. “They’re more pleasurable than sunsets to me.”

I met Zadie Smith last week. I went just to see her, just to meet her and shake her hand, and I knew it would be on a huge scale for me—the opposite of what i experience on a very small scale with other people.

Somebody will say to me, “I love your work,” and that’s great, I love hearing that. But if I’m at an event or something, and I just meet someone briefly, I can’t connect with them, and chances are I won’t even remember.

It was that sort of thing meeting Zadie Smith. I like her work, and she’s a physically beautiful human being, and it is something to be in a room with someone that famous. But she doesn’t know who I am. and I don’t feel like I’ve made any kind of meaningful connection with her. It’s the work that I like.

It just reminded me that that’s not what you do it for. There are ways in which the world can tell you that a lot of people have engaged with your work and liked it. But you can never really be there for that experience of that person reading alone.

The fact that there’s any degree of “glory”…I want what you have to do to get that, but it’s not that that I want.

“I now try to take almost every opportunity to feel like a boss,” L’Abbé says. “Not like a [whipping sound] boss, but like a [flexes] boss…If I can imagine someone else giving themselves way more credit for what I just did, then maybe I’ll give myself credit for having just done that.”

Some things she has given herself credit for recently: The class she just taught, and the bicycling she did the other night—“woah, I’m going to look amazing after this!”

“I feel like I’ve done so much tracking of food and exercise in my life that when I feel really good about it I’m not tracking it. I’m just doing it because it feels good.”

On her computer screen is Microsoft Word, with an in-progress poem in the window, and a word count ticker on the bottom bar that she ignores; “I’ve got this email that tells me that I should write 750 words today. I just ignore it; I don’t need it. It’s just spam to me now. I’m writing pretty much every day.

“I journal a fair bit, too,” L’Abbé says. “When I started journaling when I was a kid, I was like ‘Sonnet’s Journal: The true story behind the Sonnet that I will become.’ That’s basically what I thought it [my journal] was going to be. So I had this performative aspect to it as a kid, and I think I was in my late 20s when I realized that I was doing that—that I had never had a space to write stuff where I genuinely felt that nobody else could see it. I hadn’t really wanted that. So, now I have that.”

In her remaining free time, L’Abbé is working on her next book of poetry; Sonnet’s Sonnets is a passion project and allegorical retreading of Shakespeare’s 154 sonnets. For the last three and a half years, L’Abbé has weaved her own letters and language into more than 80 of Shakespeare’s classic works, to a point where the poems have no resemblance to their original versions.

Initially, L’Abbé was just writing what came to her, but she’s now working on “Sonnet LXXXVI” (86), the third in which she has weaved a section of The Truth and Reconciliation Commission’s 94 “calls to action.” In essence, she has made hard work for herself even harder.

“Maybe it’s like biking up a hill,” L’Abbé says. She makes a slope with her hand of about 60 degrees. “You start to be okay with an incline like that, after you bike up a bunch of hills [like this].” She lifts her hand to a slope of 80 degrees, and smiles.

In some ways, Sonnet’s Sonnets is a reclamation. Yet, L’Abbé says she never gets annoyed by people always asking the same question about how she got her name.

“It’s fine,” she says, and pauses for a long moment.

“It’s something to talk about.”