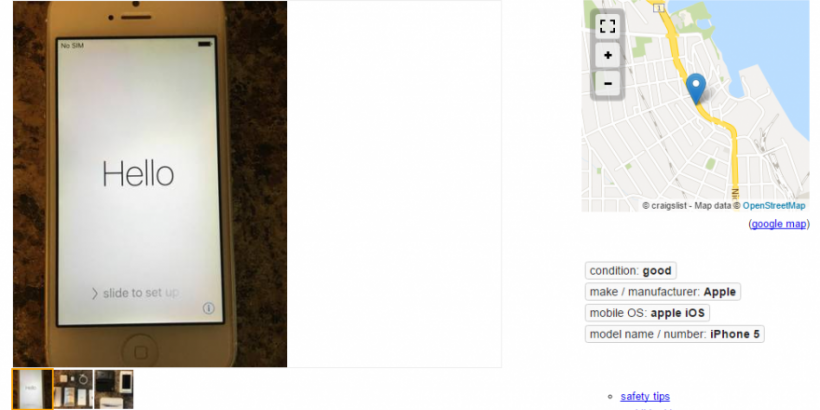 I listed my iPhone on Craigslist. It was my first time using the site.

There was nothing egregious about my listing—all the necessary information was there in a succinct fashion. Condition details, pictures, my phone number (I opted for the “DO NOT CONTACT WITH SOLICITATIONS AND/OR IF YOU ARE A MURDERER” selection)—it was a pretty standard listing.

A day later, I get a text message. The area code looks unfamiliar, so I Google it: New Jersey. I plug the number into Facebook and only get one hit—“Jorge” (profile picture of a greying man with a shirtless chest and a soulless smile) had posted a string of around six thousand non-sequential numbers that I could only reasonably assume to be a cryptogram leading to the location of his kidnappers. The string just so happened to feature the three separate chunks of the 12-digit phone number I had searched for. I exited his profile after watching the video he posted 13 hours earlier of a cat getting washed by a detachable shower head.

I decide to text the number back; the person is probably on vacation to the Island and wants a decent, temporary phone with a Canadian number. I want money to order Pizza Hut before my $5 off coupon expires.

I get a reply in broken English saying that they’d like to pay me more than my asking price if I can ship it express to him.

For what it’s worth, number four on PayPal’s “avoid popular scams” page is “overpayment scams,” which says that a scammer may “tell you that they accidentally overpaid you, the extra money is for the shipping costs, they’re giving you a bonus for your great service, or the money is for the stress they’ve caused you.”

I text back, “Holy shit are you serious!? Yes, thank you so much!” and send them my email address.

“I am a very honest and kind person to you,” they reply. “I will be making out my payment now, once payment is completed I will notify you.” Minutes later, I have an email from PayPal that I almost miss because it was caught in my spam filter: Money received from Debby Scott. Ship to Chris Paul in Nigeria.

“I’ll take it to the post office first thing tomorrow morning,” I say. “Thank you so much, again.”

I let her know that evening that I shipped the phone and that it should take about two to three weeks, but she asked for what’s called a “tracking number,” which is supposed to tell the buyer where the package is during transit. As it turns out, Canada Post can’t reissue your tracking number if you accidentally throw away your receipt. Fortunately, Debby was patient with me and went ahead and notified PayPal that I shipped the phone on good faith.

A week later, Debby texts me again informing me that an additional $575 has been deducted from her account and put on hold as part of the package coming through customs, and that I must pay that $575 for customs or Debby’s payment for the phone will be put on hold. The good news was that Debby assured me that I would receive recuperation and that “PayPal will credit [my] account once [I] paid the charges.” The bad news is that I had already bought that Pizza Hut pizza in anticipation of receiving the money and was now flat broke until next month.

“Next month?” Debby texts. “What if the customs destroy the package?”

I sent a slanty-face emoji in reply.

As of writing, it’s looking like a lose-lose scenario for the two of us, but I’m waiting for an email back from “services-intl.pay.pals@accountant.com.” Hopefully they can waive the customs charge.

Better yet, they could credit my account for the “stress they’ve caused me,” and maybe I can get another pizza.