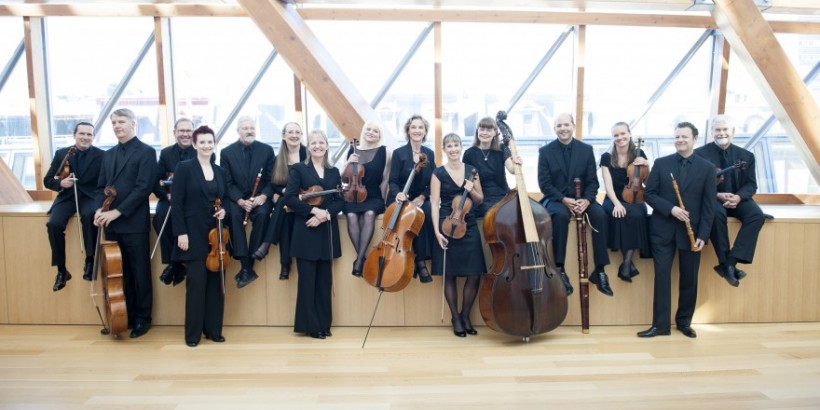 As I sat in my seat, staring at the stage, waiting for the lights to dim and the orchestra to come on stage, I noticed something odd about the stage. Where were all the chairs and music stands? Where was the conductor’s podium? All that occupied centre stage was a harpsichord, an armchair, a coffee table, and two plastic chairs. A large screen hung above the set-up. I had to double check the program to make sure I was about to watch the Tafelmusik Baroque Orchestra. Upon looking in the program, though, I noticed another odd thing: they listed a narrator. What kind of orchestra is this?

Two musicians walked on stage. One brought with them a lute, and the other a bass. A third musician followed behind and sat on the waiting stool in front of the harpsichord. The lights had not gone down yet, but they began to play. Other instruments joined, though at first I saw no other musicians. Then I saw them out of the corner of my eyes, slowly emerging from beside the audience and gathering on stage. Once they had all found their places, the lights went down, and the orchestra played the first piece by Handel, wandering and bouncing around each other.

Throughout the performance, everyone on stage was energetic and smiling, interacting with each other via body language—a nice change from the typical straight faces and rigid bodies hiding behind sheet music (these musicians had memorized every song). There was constant positive movement, had a welcoming tone that invites the audience to relax and not take the performance so seriously. It was obvious that the musicians were passionate about the music they were playing, and this made the experience so much more enjoyable.

The orchestra played music by Handel, Vivaldi, Sweelinck, Purcell, Marais, Bach, and Telemann. Songs that featured various uncommon instruments, such as the lute and harpsichord, were picked to highlight individuals in the orchestra and show off their impressive talents. Each performer received at least a few minutes of solo glory in the two-hour show.

Between each song, the narrator spoke, telling stories of five historic European houses from the 17th and 18th century in London, Venice, Delft, Paris, and Leipzig. Hence the name of the show, House of Dreams. These were houses that had significance not only in the musical world, but in visual art as well. The screen hanging above the stage showcased many paintings that were found in these houses. The narrator also detailed the lives in those houses, the cultures of the time, as well as random facts about manufacture and trade in those periods.

In the end, I felt like I watched a multimedia documentary rather than a concert. I had a much better understanding of the roots of the music I heard, as well as the lives of the composers. It was an impressive production, incorporating music, acting, movement, and visual art. I walked into the theatre expecting a boring concert, but came out feeling energized and educated. I also felt inspired to research the history of classical music more often; it’s more than just good background music.