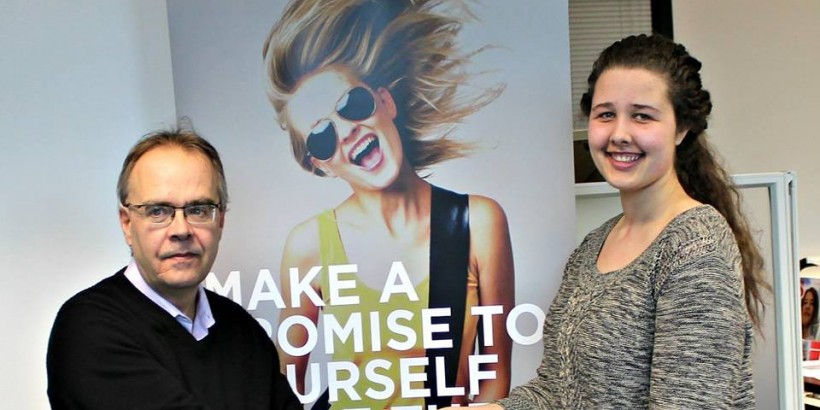 Above: Natalie Williams accepted a cheque on behalf of the Canadian Liver Foundation, BC and Yukon Chapter on March 3. Photo courtesy Courtesy of the Biliary Atresia Awareness and Research Facebook.

Natalie Williams, 18, sits on a plush couch, blinding production lights on her face, and a microphone clipped to her shirt. Next to her sits a beaming Breakfast Television reporter and Williams’ doctor, ready to offer his insight.

As the segment begins, the reporter asks Williams to tell the country about her experience with biliary atresia—a rare, life-long threatening liver disease—and about the non-profit organization she created to fight back against it.

When Williams was nine weeks old, she was diagnosed with biliary atresia. About one in 16 thousand to 20 thousand babies are born with the disease, which results in the shrinkage of the bile ducts, and, if left untreated, can lead to liver failure. Most with the disease will require liver transplants within their first few years of life.

Like many rare diseases, there were minimal resources for patients of biliary atresia. So, in 2012, at the age of 14, Williams founded Biliary Atresia Awareness and Research (BAAR), a non-profit organization aimed at raising awareness of the very thing that was holding her back.

“I hoped it would go far, but I never imagined it would have reached this far, and that so many opportunities would have come out of this,” Williams says. “The awareness and funds we have made, and the people we have met, has—and still continues to—blow my mind.”

It began in Wolverhampton, England, on August 29, 1997, when Williams and her twin sister, Kathryn, were born seemingly happy and healthy babies. Shortly after being brought home, Williams’ parents noticed one of their daughters was considerably jaundiced—a symptom common in even healthy newborn babies—although her twin sister was not at all. Over the next couple of weeks, Williams continually got sick, her skin grew increasingly yellow, and she passed pale stools, which her parents took as signs to get checked out by several doctors.

Yet, all of the doctors dismissed the symptoms, and insisted that her parents should not be so paranoid.

At six-and-a-half weeks, when Williams’ mother, Nickie Pearce, took her for a routine check-up, the doctor questioned how long she had been jaundiced. When Pearce told him, his brow furrowed and his response worried her; he called the hospital and told Pearce to take her baby there right away.

“When he reached for the phone, his hand was shaking and his face was white,” Pearce says. “That’s when I knew it was something serious.”

Tests were booked, and the doctor said the worst case scenario would be biliary atresia. Two and a half weeks later, the worst case was confirmed reality. A few days later, Williams underwent the Kasai procedure, a vital operation to clear the blocked bile-ducts, which saved her life and temporarily improved her health.

Now 18 years old, Williams is a rare case because she has not yet had a liver transplant, while most patients must have the operation soon after the Kasai procedure.

Williams and her family left the UK and came to Vancouver Island when she was seven years old, and over the years she has gone through over 500 hospital procedures and tests. At 14, her health began to decline, eventually causing her to miss 90 days of school in grade 11. Through her countless hospital visits, she met many people with the disease, and saw too many lose their lives to it. She also learned the hard way how few people, including medical professionals, actually knew about the disease.

She began looking for support systems for biliary atresia. “I was frustrated with how little awareness and knowledge there was out there,” Williams says. “There had also been several babies that died from biliary atresia within a few weeks, so I was wanting to somehow find, and give, hope to others.”

“I think it’s important that BAAR is accessible to everyone, as it allows anyone and everyone to not only view our [Facebook] page and website, but to learn from it,” says Williams. “A page dedicated to only one particular person, although great, isn’t what I wanted. I never wanted the attention on me, but on awareness, and finding a cure.”

Run by Williams, her parents, and her grandparents, BAAR is an official non-profit organization. There is no funding pot for the disease, and the organization is not about giving money to families. Rather, by teaming up with the Canadian Liver Foundation (CLF), BAAR raises awareness, and the fundraisers it holds go towards CLF, where the money can then be put towards research. Since 2012, the group has raised $10K.

Williams hopes to do more fundraising in the future and raise at least another $10k, as they have been primarily focused on education so far. One strategy will be to create more merchandise to add to the t-shirts and wrist bands they have already found success with.

Williams has dedicated over five thousand hours to BAAR; she has done many interviews with media, and public speeches for various groups of doctors, nurses, and students, as well as local organizations, using her experience to tell her story about the symptoms she experienced, and the slow diagnosis she went through.

She also meets with children in the area who have biliary atresia. One baby she has grown especially close with is 19-month-old Naomi. Naomi was originally given two weeks to live, and Williams’ doctors were worried what would happen if she became attached to the child. But Naomi is now doing well after having a liver transplant; unlike Williams, most of the babies she meets have already had the operation.

“It gives me hope to see them doing well after their transplants,” Williams says. “Seeing others struggle is harder than what I go through. The physical isn’t the hardest part—it’s the mental and emotional.”

Currently, Williams’ health is deteriorating, but before she can undergo a liver transplant her doctors need her to be near full liver failure. “I kind of want the transplant to hurry up and come, because I don’t want to prolong the suffering,” she says. “Seeing positive situations like Naomi give me drive.”

Now in her first year of pre-medicine at Camosun College on Vancouver Island, Williams tries her best to attend all her classes, but appointments and health complications still take a toll. “I ended up failing physics last year,” she says. “But my teachers are more aware now.”

Williams hopes to become a doctor, and is particularly interested in working as a biliary atresia specialist or anesthesiologist. Having recently been awarded the North American Social Media and Patient of the Year awards, she is well on her way to continue making real impacts in the lives of people affected by the disease.

“Long-term, finding a cure is the ultimate goal,” she says.

When she isn’t managing her health, working on BAAR, or doing school work, Williams works and spends as much time as she can with her friends and sister, who is also in university and planning to become a police officer. Williams also loves to bike and ski, though these sports pose a risk to her enlarged spleen. “I’m not supposed to do them, but I do anyway,” she says. “I don’t want a list of things to do after the transplant.”

While some youth will rebel against having a liver illness by drinking at parties, others do so with riskier sports, Pearce explains. The thought of her daughter putting herself in risky situations will never fail to put her on edge, yet she does not want to take all of the living out of her life.

“It’s about balancing enjoying [your life] and protecting your life at the same time,” she says. “But, aren’t we all in that? Sometimes you just need to go live.”