The Nanaimo Clippers lost their inaugural game to the Port Alberni Bulldogs on March 4, but they quickly broke the trend by dousing the Bulldogs in four straight. In a 7-3 victory on March 11, one week after the Bulldogs’ only win of the post-season, the Clippers eliminated the Bulldogs four games to one.

The Clippers have now moved onto the second round of the playoffs to play the Powell River Kings, who eliminated the Cowichan Valley Capitals in six games, taking that series 4-2. The Clippers and Kings will face off for the title of Island Division champions and entry to the double-round-robin that comprises the third round. Having lost only one first-round game, the Clippers maintained their position as top seed in the Island Division and their home ice advantage.

Powell River took the regular season series against the Clippers in a commanding fashion, winning five of the seven meetings between the teams. In total, the Kings outscored the Clippers 26-17 and only lost once on home ice at Hap Parker Arena.  There is a chance coming into the second round that the Kings are fatigued from the rough opening series, which included three overtime finishes. The Kings were able to score 23 goals to defeat the Capitals, but the 16 goals they allowed is the most among the remaining squads—Clippers’ goaltending only allowed eight goals in their five-game series against the Bulldogs. The Clippers will be looking to ride their winning streak through the Powell River series and enter the double-round-robin with momentum. At press time, the Clippers lead the Kings in the second round series 2-0, going back to Powell River to play their third and fourth games on March 21 to 22.

The Penticton Vees maintain a looming threat in the Interior Division as they enter the second round to face the West Kelowna Warriors. While the Vees are an easy favourite to defend last year’s title in the Cup Finals, the Warriors pose a roadblock to the Vees’ success. For Clippers fans, the best case scenarios include the Warriors taking the series, and undoubtedly entering the round-robin banged up, or the Vees winning a long, grueling series that saps as much out of them as possible prior to the round-robin. But even then, the unique round-robin format of the third round places teams by regular season point totals, so there is no chance of the Clippers earning home ice advantage over either the Warriors or the Vees, regardless of which team advances.

The most important story of the post-season so far is the Clippers’ secondary scoring, which had been a missing factor throughout the regular season. After heavily relying on the starting line-up all year, goals being generated from the second and third lines have added excitement to the Clippers’ post-season play. At the end of the first round, the Clippers’ top-three forwards had only scored six of the team’s 18 goals. The other 12 goals were recorded by defensemen or bench forwards, such as Nolan Aibel—Aibel is currently tied for the team lead in goals with all-star, veteran forward Sheldon Rempal. If forwards like Aibel, Chris Dodero, and Gavin Gould can maintain their production alongside the offensive staple that has been the first line, the Clippers will continue to be a force to be reckoned with.

At this point, team news has been pretty quiet—which in the playoffs can be a good thing. Clippers defenseman Yanni Kaldis was named the BCHL’s first star of the week at the end of the first round. Kaldis had recorded six points in five games, including two goals (one shorthanded, the other a game winner); he leads all defensemen in points through the first round. There have been no injuries reported.

Puck drop for each game of the second round is set for 7 p.m. (excluding the possible game six match scheduled for 7:15 p.m. on Friday, March 25 in Powell River). Tickets for Clippers games can be purchased at the box office at Frank Crane Arena an hour before puck drop. Tickets are only $10 for VIU students, and a free beer is included with admission. For fans able to make the trip to Powell River, tickets for away games are available for $15 through the Kings’ website at tickets.powellriverkings.com.

A full post-season schedule can be found at bchl.ca/playoffs. The double-round-robin begins Friday, April 1. 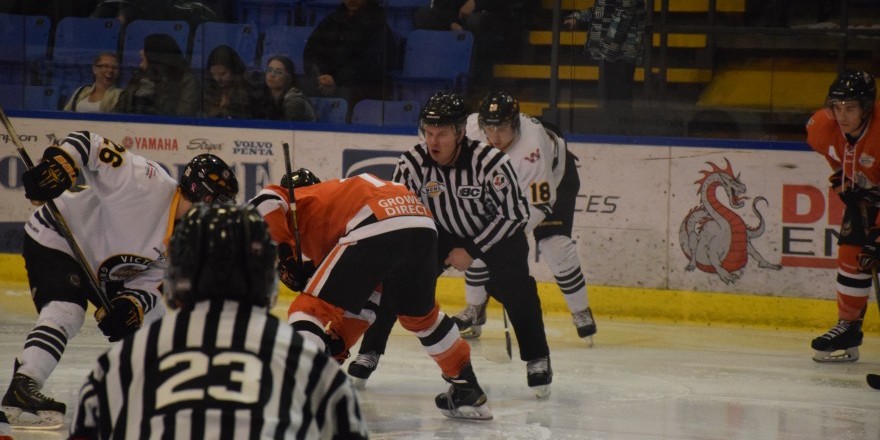