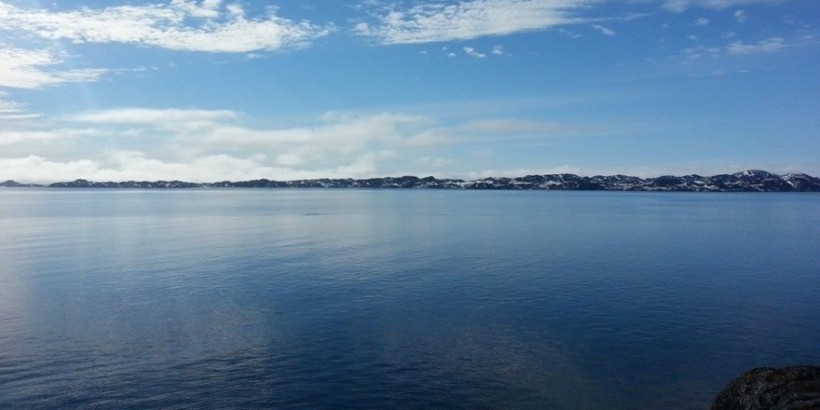 Greenland is a barren, white island known as the land of ice and snow—a no man’s land where snowstorms never end. But in reality, the island’s population is approximately 56 thousand and it has all four seasons. During spring, the snow begins to melt, and you can hear the water dripping from the roof. When summer comes, the snow is all gone except for at the tops of the majestic mountains. Then the green grass grows, and you can find hunters seeking reindeer or musk ox, or taking their boats to the ocean to hunt seals, depending on the season.

When I was young and living in Greenland, a word stuck with me: Canada. I cannot remember from where or whom I first heard it. First Nations culture had always attracted me, so last year in May, when I was searching for a university to spend a semester in, I saw the totem pole on VIU’s website. I was struck by it, and right away I knew that was it; when I first arrived in Nanaimo, I felt peace.

It was a challenge for me to speak properly in English (my third language—back home we do not speak or write in English). I had to catch up and push myself hard to recall the words and to think differently when I tried to express myself. But the people here in Nanaimo are supportive, friendly, and curious about Greenland. They take time to listen to my stories. Everybody was excited to meet a person that comes from the big white island. They smile, and some of them are surprised when I tell them where I come from.

VIU offers different outdoor activities every month. There’s snowshoeing at Mount Washington, which feels like you are somewhere else in the world; there’s storm watching in Tofino, where the beaches stretch almost endlessly; and there are trips to the abundance of heavenly green rainforests that hold so much history.

I am taking courses in First Nations, Digital Media, Creative Writing, and Journalism. I took the last two because of my journalism studies back home, and I chose the First Nations course because I want to learn the Canadian traditions. During the readings I was surprised to see how similar First Nations history and Greenlandic history are. The loss of identity, culture, and traditions are the same. I learned two histories: this country’s history, and my own.

The readings began to trigger emotions. It was tough for me to read the dark side of the First Nations’ history, or to click in to my own ancestors’ suffering after they met Denmark-Norway in 1721, which brought Christianity and baptised the Greenlandic Inuit. The values from our ancestors were wiped away into a never-ending wind where they could never be found again. The mourning follows even today, where alcohol, drugs, abuse, and suicide covers the small cities like a dark cloud. Deep inside I know that my path will heal the wounded; with guidance from the Elders, I have healed, so I have learned how I can heal others.

Trust grows within me, which makes me a better person.

I found my path.