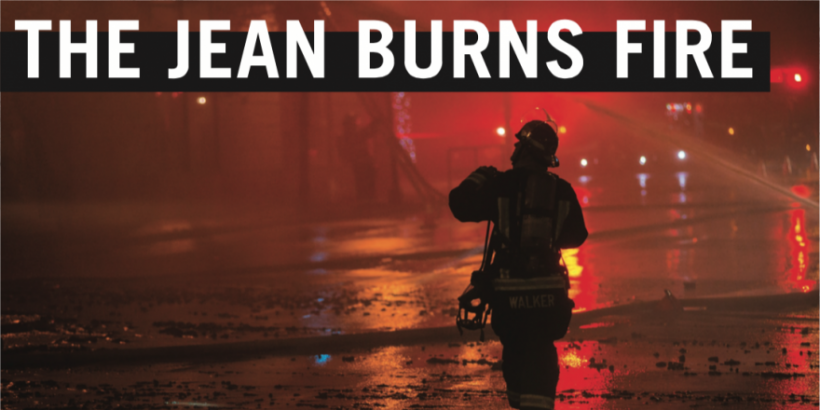 Above: A ﬁreﬁghter works to contain a large ﬁre that gutted the historic Jean Burns building in the heart of downtown Nanaimo on March 30. Photo by Bryn Tassell.

By Antony Stevens and Shanon Fenske

SF | The crowds in front of the yellow, movie-scene tape blocking Albert St. are thick. Slowly, I navigate my vehicle
towards my Cavan St. parking lot, past open-mouthed stares and jogging witnesses pointing excitedly at flames dancing upon a downtown building’s rooftop. Parked firetrucks flash their lights as smoke billows into the growing darkness. I cannot believe what I’m seeing.

My vehicle parked, it only takes a moment to rush up to my unit. A campfire smell greets me as I enter my suite. I walk reverently up to my living room window, and the heritage structure below me wears a helpless mask. The fire has staked its claim; the rooftop is aglow in a yellow-orange so bright at times it looks white.

Hose-wielding firefighters assault the flames from every direction, but the situation looks hopeless. The space between the buildings across the China Steps ally looks vulnerably narrow. From up here it’s clear: The whole block is in danger. Tonight, Nanaimo’s firefighters are waging a war.

AS | The death of the Jean Burns building is one of the deepest ironies. Built in 1955 and named after a fashionista, the block attracted precious garments and artists over its life. Fast Frames called it home for almost 30 years, while they homed countless photos and art pieces into their own custom-frames. The much younger My Favourite Fabric Store is currently looking for a wall to showcase creations until they find a new home.

Countless artists moved in and out of the building’s various gallery spaces.

The Hofmans lost years’ worth of art. Thirteen others lost their submissions to the Art Council’s spring exhibition.

Surviving (with a little water and smoke damage) is a collaborative (un-framed) art banner, done in partnership with the Arts Council and AEIOU collective, and the people of Nanaimo. The banner is also searching for a wall.

The China Steps, tonight, is a frame for sadder art.

AS | It’s half-past eight in the evening, and I’ve got a slice of pizza between my teeth when my girlfriend leans over to show me a video on her phone. It’s an instagram: A firetruck, ladder half-extended, topped with a fireperson shooting down on a building with black-smoke windows. A ferocious blast of flame comes horizontally out of the building—fire with propulsion like a rocket launched somewhere inside. The roof collapses, the fireperson repositions themselves, the videographer says “oh my god,” with a palpable surprise somewhere between confusion and awe.

It’s not until my third viewing that I recognize the scene.

I start getting Facebook messages referring to the fire in past tense, as though the viral instagram was its only capturing before its inevitable defeat. I could walk 14-and-a-half minutes down the road and be close enough to see it glow, to taste its ash on my tongue, to capture it myself. But I stay on my phone. The people on nearby rooftops will collect the moment for me.

Hired Guns Creative—one of the 15 businesses and other collectives lost in the fire—live-tweets from the street below, among gathered groups of watchers and waiters. Melanie Godel—President of the Arts Council that was once located downstairs—finds out via text like the rest of us. Word spreads like a structural fire: skyrocketingly.

SF | It is now after 7 a.m. and the sun is up. At 2:30 a.m. I could still see the flames.  I rise up and look outside—I do not want to, but I have to. There, in front of me, the burnt out and hollowed parts of the wedge-shaped building appears a dystopian heart. There is heaviness in mine.

Some of my earliest Nanaimo memories resurface: I didn’t live downtown then, but my friends and I would meet at Filthy McNasty’s, and Acme after that, for coffee, or a bite, or to listen to live music. At one point, there was an occult bookshop accessed through the China Steps side, called the Boiler Room. Strange, holy relics from far-flung lands would rouse my curiosity. A seed to travel to exotic lands was planted. Kids used to play Magic the Gathering in one of the shops along Terminal Street. I remember how I used to privately wish to join them, but I didn’t know any of the smiling faces I could see through those open doors. My first “serious” wall art came from Bastion Galleries’ Fast Frames. It was of a panther resting in a tree. The image hasn’t been on my wall for years, but for some reason I still have it. I have never been able to let it go.

New business owners came and went. I would leave to work or travel, but Nanaimo always called me back. Over time, the symbiotic buildings (which operating officer Rick Hyne says was made up of three others over time with “many nooks and crannies”) became the “Acme Block” to me—always a central character in Nanaimo’s landscape. From my living room window she had greeted me faithfully every morning for the last several years.

The dead building stands, for now, a stark contrast to the brightness now shining forth from the community. The city rallies in love, tenderness, and generosity. Local businesses fed firefighters as they toiled through the night. Others began to raise money or offer support to those who had lost everything. From the ashes of this shattered piece of Nanaimo’s history, it is easy to hope for a new heart to emerge. I dare to believe this will be so.