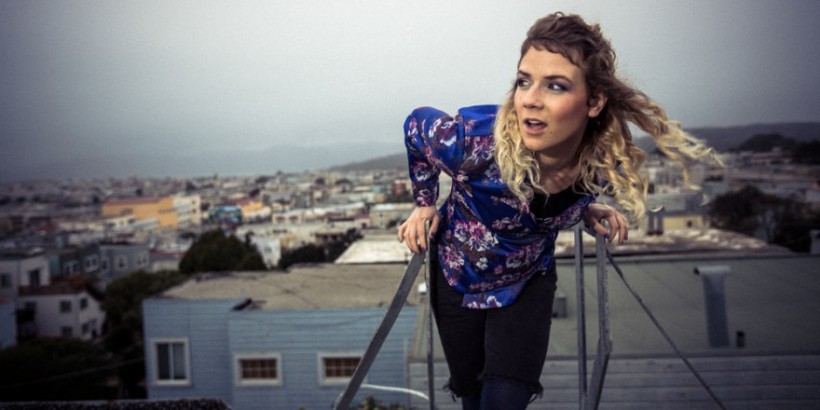 It was a month or so ago, on an episode of The Savage Lovecast, that I first heard the shocking and hilarious sound of Rachel Lark’s music. Her comedic style was a breath of fresh air, and I needed to know more about her. So off to Bandcamp I went, where her 2015 album Vagenius can be purchased for a mere $7.

The album is a fabulous mix of comedy and singer-songwriter music, with the common thread of feminist ideas and sex positivity running throughout. While the album features her primarily on piano and ukulele, according to her website, this can change drastically from performance to performance, with this more traditional sound being one side of the spectrum, and the other being Lark performing “behind her laptop and synthesizers creating dance beats to accompany her layered vocal harmonies,” which would genuinely change so much about the experience that I would really love to hear what that sounds like.

While still an up-and-comer in the music and comedy scenes, she has amassed quite the cult following, and a devoted fan base in her hometown of San Francisco. This feels like proof in itself that she is doing something unique and interesting that people have a real desire for. You can even hear her audience sing along with some of her songs, so it is pretty clear that people know who she is and have a love for the music she makes.

What’s most interesting about Lark is her blunt, open, and deeply honest content. She is bold enough to acknowledge female sexuality, and to call bullshit on the blatant and plentiful double standards placed on women when it comes to their own desires and interests. She does this not only by singing about those hypocrisies specifically, but also by subverting them and singing about things that many might find shocking for a woman to sing about. A perfect example comes from the deceptively innocently titled “You Only Live Once.”

Lark’s music is raw and explicit, but you really do feel the passion and the intense emotional connection she has to the things that she sings about. Songs like “For the Boys” showcase her huge range of vocal ability and genuine frustration. It’s very obvious that she is a talented musician and a funny person, and incorporates both her wit and musical abilities into an album that will make you laugh and think.

While she doesn’t have much in the way of Canadian dates approaching, I would strongly recommend keeping an eye on the work that Rachel Lark is putting out. I have a feeling that there’s a lot to look forward to from this dynamite performer. She recently released a music video for a new song called “Warm, Bloody, and Tender,” and is beginning her Vagenius tour very soon. You can follow her work by heading to rachellark.com.