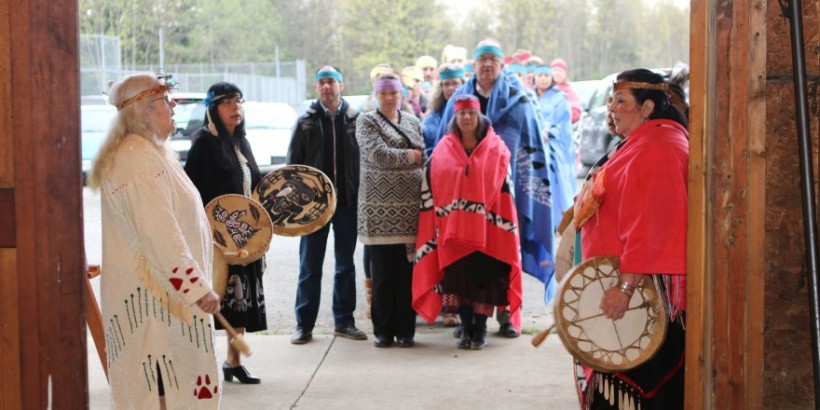 Above: An honouring ceremony for the Snuneymuxw people last year at VIU.

Last week, the “Indigenous Survivance: The Truth in Reconciliation” event was held on campus by my class, Health and Human Services 263 (HHS 263): Elder Teachings Across Disciplines, with instructors John Swift and VIU Elder Geraldine Manson. I used to think I was somewhat well-informed about First Nations issues, but this class has been an eye-opening experience. I realized what was missing was an Indigenous perspective. Was Columbus a mighty explorer who discovered America, or was he a mercenary—an invader who plundered the land? And why does the government, who illegally occupied this land we call Canada, have sovereignty?

Elder Geraldine Manson says that there used to be 98 thousand hectares of land that belonged to the Snuneymuxw people on Vancouver Island. Today, there are only 266 hectares, known collectively as Indian Reserve crown land. The Aboriginal people don’t own it—they only live on it—so they can’t use the land as collateral to borrow money from the banks. When our class visited the main village site of the Snuneymuxw peoples at Departure Bay, there were no longer any Aboriginal people living there. It used to be a vibrant community with seven rows of longhouses facing the ocean. Geraldine told us they made their own tools that lasted thousands of years and they knew the weather by studying the stars, which also told them when to hunt and when to fish. After the Snuneymuxw people left to go fishing, they found their houses occupied by white people when they returned. They never got their homes back. Similar stories happened to First Nations people all across Canada.

Guest speaker Nick Chowdhury, President of the Island Marine Aquaculture Working Group, spoke about restricted fishing rights and access for Aboriginal people. Fish (particularly salmon) are an important part of Aboriginal identity, culture, ceremony, and stewardship. Fish stocks have declined drastically, due mostly to capitalistic practices, and today, Aboriginal food needs aren’t being met. The Department of Fisheries and Oceans (DFO) limited access regulations to only 14 days per year, meaning fish are not always available to the 50 different annual Aboriginal ceremonies, where fish play a very important role. It’s not just a limitation; it’s a theft of a nations’ culture.

HHS 263 has given me the insight to see that Aboriginal lives, beliefs, and cultures are being negatively affected and exterminated by antiquated mandates, such as fishing rights. A recurring question was “by whose authority?” By what right did early Europeans have authority over First Nations people and their land? By what right does the DFO have authority to restrict fishing rights and access to Aboriginal people? Who gave the church and government the right to kidnap First Nations children from their families in order to remove “the Indian” from them in residential schools? We point fingers at other countries for their atrocities, like the Holocaust in Germany, or the colonization of Aboriginals in Australia, but what about us? How is what Canada has done to First Nations people any less horrible?

John Swift pointed out that the government cannot undermine themselves, as it would set a worldwide precedent and the system would crumble. Essentially, the government wants to compensate the displaced Snuneymuxw people with money, but not with land. They want to make reconciliation for residential schools with money and apologies. Is that really enough?

It’s difficult to grasp the enormity of the loss suffered by the Snuneymuxw peoples, and why their loss should be reconciled. It’s a complex issue with no easy answers, but at least now the questions are being discussed openly between government and Aboriginal people. Hopefully this will move us closer to resolutions steeped in fairness.