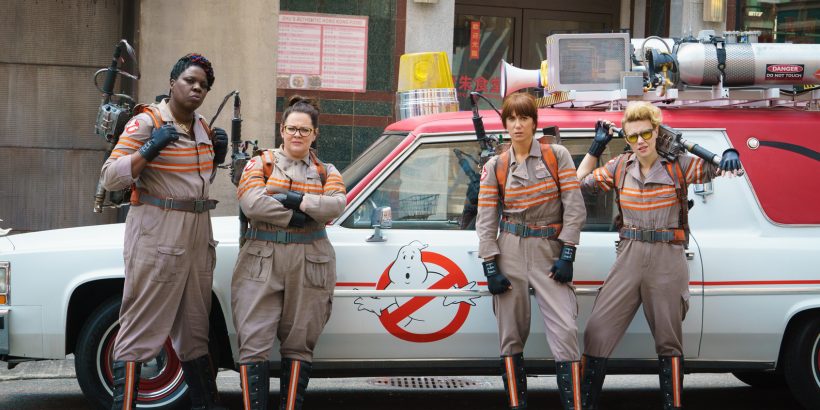 Well, it’s finally come. The remake that would ruin all childhoods, emasculate everyone, and bring about the complete and total breakdown of society as we know it. I’ve seen rants, raves, fits, and complaints leading up to the release, but was pleased to see that critical reviews were actually pretty good. Of course, the reviews were not without the dissenting voices and man-babies, but I went to the movie expecting to enjoy the work put forward by the cast and the director.

Ghostbusters is fun, funny, and entertaining. While it isn’t a replacement for the original, it doesn’t try to be either. The film acts as a fun expansion, or torch passing even. It features the three living actors from the original film, and delivers fantastic comedic performances from a wildly talented main cast. This was one of the things that people were inexplicably so irate about, as the cast had been gender flipped, putting four women into overalls seemed to be the worst thing anyone could ever do. The titular Ghostbusters are now played by Kristen Wiig (Brides Maids), Melissa McCarthy (Spy), Kate McKinnon (Sisters), and Leslie Jones (Saturday Night Live). While Wiig and McCarthy are consistently funny, and bring their usual game to this one, it is McKinnon and Jones who really shine. The pair are hilarious, and make me wish I was still watching Saturday Night Live. The four have good chemistry, and seem to be really enjoying themselves.

Rounding out the cast you have Chris Hemsworth (Thor) as the hilariously dim receptionist, Neil Casey (Inside Amy Schumer) who plays the rather lackluster villain. Casey does fine in his particular character, but feels a bit hollow when compared to the original film. You’ve also got an appearance from the always wonderful Michael Kenneth Williams (The Wire) and a number of quick and funny cameos from the original Ghostbusters in the form of Bill Murray, Dan Aykroyd, Ernie Hudson, Sigourney Weaver, and Annie Potts.

I mentioned that the villain seems disappointing when compared to the original, and I think this might be the problem with Ghostbusters. Not with the movie, but with the fans of the franchise. While I have seen and enjoy the 1984 film, I am not filled with a burning and irrational nostalgia for it, which seems to fuel a good portion of the hatred directed towards this version. No, this movie will not go down as an instant classic, or replace the original, but we have to stop looking at movies like this as if they are making an attempt to do either of those things. No one is coming to your house to steal your copies of the original, and no one is forcing you to see this one. Did there need to be a remake? No, there almost never does. Would it have been nice to see these actors work together on something original? Hell yes it would.

However, they did remake it, and now it exists. No amount of tantrum throwing is going to make it go away, so maybe it’s time to calm down and let those of us who enjoyed it enjoy it. Also, if your reason for disliking it is the gender-flipping, then you need to grow up and I have nothing to say to you anyways.

There are a couple of plot and pacing issues, but none of them stood out in a way that ruined the movie. Kristen Wiig finds herself separated from the team later on in the movie, for no real reason except to set up her heroic scene. The ending is a fun and exciting fireworks show, and makes for a fun final sequence. No, it’s not the same as the original, and that’s fine. The story is simple, and the movie as a whole is well-directed and shot. The scenes with Slimer and Lady Slimer were stupid visual gags that didn’t add or subtract anything and I was engaged enough with the main characters not to care about that nor any of the other pieces that didn’t work.

One of the things that surprised me was how effectively creepy some of the ghosts were. The opening scene with Zach Woods (The Office) was atmospheric and, in particular, the first few, ghosts were relatively well designed. It’s not a scary movie, but then the original wasn’t either. The tone leans much further over to goofy, but I don’t have any issue with that to be totally honest. Apparently there are some who were unaware that the ’80s film was a comedy… I don’t even know how to respond to that.

All in all, Ghostbusters is a fun and entertaining ride with a good director, and some deeply funny comedians leading it. Which is exactly what it needed to be, and exactly what the original is. The ’80s version is a funny film with strong comedic actors, which happened to hit at the exact right time. Watch it if you want, you’ll probably feel exactly how you expect to feel about it. If you’re the kind of person whose nostalgia is so deeply ingrained that you feel the need to ruin it for yourselves or others, then that’s got to be a whole lot of work to maintain, and I kinda feel bad for you.