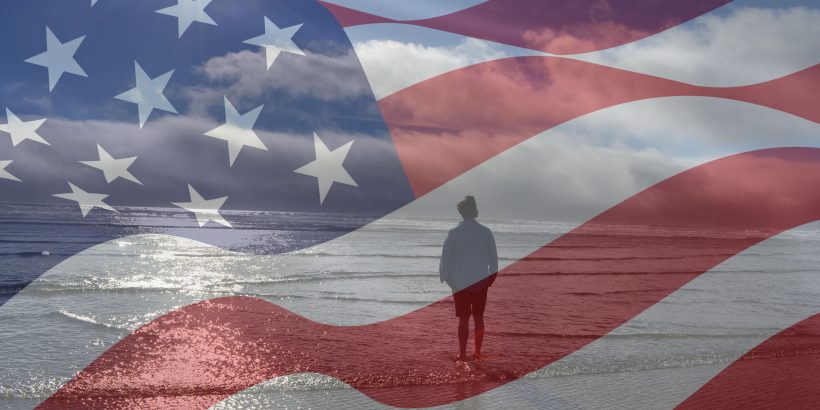 Above: Ignorant Canadian is amazed there are no advertisements in the ocean. (Photo by Natalie Gates)

The larger than life hamburger greeted us the second we crossed the border, its meaty face staring down at us from its billboard perch. The restaurant inviting those with a passion for gourmet food? McDonald’s, of course.

This was just the beginning of a great McDonald’s journey, as each exit along the highway had one just waiting for the “foodies” to swoop in and grab a bite.

Of course, the golden arches weren’t the only things decorating the fast food freeway.

The scattering of blue “Make America Great Again: Vote Donald Trump” signs didn’t really surprise me as we made our way through remote northern Washington. This was ‘Murica after all.

As the barren highway took us past farm after farm, another huge billboard glistened in the distance that made my eyes widen. It was not a burger or Trump’s unmistakable tagline plastered on this one, but a large fetus.

“What have I got myself into?” I thought. “Venturing out of my safe little Canuck ecosystem to explore this southern, more boisterous, and slightly more frightening cousin?” The Land of Opportunity, which seemed to shut down more than it opened up—depending on who you asked.

But we trekked on, in pursuit of the ruggedly beautiful Oregon coast, sandy beaches, quaint American towns, and natural wonders.

As with any road trip, pit stops for washrooms and gas are aplenty. The first gas station looked normal, despite the cheaper gas price. Another ad peaked my interest. A camel, with the tagline, “So mild, so cool,” scrawled below it stood beside another sign for cold drinks. Camel Cigarettes with your Slurpee, anyone?

Along the barren streets of the countryside, and right off the highway, were several cannabis dispensaries, advertising “Medicinal and Recreational Marijuana”. At this, I actually felt a twinge of embarrassment for my home BC—famous for its herbilicious BC bud. Get yourself together, Canada.

Yet, once we left Washington, Trump signs were nowhere to be seen. Surprisingly, I wouldn’t see any other boisterous campaign signs for the rest of the trip through this tiny corner of the US of A. Just a couple sullen #BernieOrBust bumper stickers mixed in among the crowd. In their place was double the amount of dispensaries.

Like Canada, countryside and coastal America have different vibes and I felt myself feeling a little more at home in the town of Cannon Beach, a place well known for its beach resorts, tourism industry, great food, and local beer. Beer.

After a long, hot drive, an ice cold beer would take the edge off and perhaps we could find solace in this foreign land. Run into one of those funky looking bars and grab a brew… but one thing stood in my way. At the age of 20, I was unable to order myself a drink. In a land where children can buy guns at 16, I still can’t sip an IPA in the confines of a licensed establishment for another year?

Thankfully, my boyfriend was legal and we opted for drinks on the beach instead. We grabbed some food and then asked our server where the nearest liquor store was.

“There’s a grocery store just around the corner,” he said with a smile.

Did he misunderstand us? Were our Canadian accents really that thick? He was awfully friendly though; I thought we Canadians were supposed to be the nice ones?

“Do they sell alcohol there?” I asked. He laughed and said, “Of course.”

Sure enough, the grocery store had rows of shelves stocked full of ice cold beer, wine, and more. Hands off until you’re 21, but here’s the wine just sitting next to the cheese, chocolate, and strawberries, tempting the crap out of you. Here’s the beer just calling to me from the frosty glass windows, making googly eyes at the frozen pizzas. What was with this madness? The next night, in the motel room of another quaint coastal town, I decided to try my game with the news coverage. I didn’t watch much, but the six and a half minutes I saw managed to cover about six and a half different shootings.

What we did watch more of was the Rio Olympics, or at least I thought it was. There were a few instances I thought we had accidentally changed the channel to Entertainment Tonight.

Dolled-up gymnasts gathered around an interviewer who flipped her golden hair and asked what they thought about Zac Efron. “That’s random,” I thought. But suddenly Efron himself entered the camera frame, arms open for hugs. The whole reunion was followed by floating photos of gymnast champ Simone Biles accompanied by tweets pinpointing her excitement at the introduction. Then—gasp—her “Rio boyfriend” tweeting at Efron to stay away ‘cause Simone was his girl.

Panning back from the segment to the anchors on the beach, one of them—who seemed suspiciously drunk—threw her hands up in “mock” jealousy that she didn’t get the chance to meet Efron.

This of course had nothing on the ravenous Today Show co-hosts who cut their interview with Pita Taufatofua (the beautiful Tonga flag bearer) short as they went in for a chance to rub coconut oil all over his muscles.

Over-sexualization of athletes aside, it was the anchor’s snide remark after India won its medal in badminton that made my brow furrow. “About time they got one, given the size of their population.”

Back out on the road, heading through forested areas, I couldn’t help but feel like something was missing.

Not unlike BC, Oregon leads its nation in timber production. The wood products industry still accounts for about 27 percent of the jobs and income in Oregon’s manufacturing sector.

And you can tell. Unlike BC, cut blocks go right up to the edge of popular roads, including the Oregon coast highway, and stare you in the eye. The clearcutting restrictions in Canada may be the reason many Americans flock to Canada in hopes of soaking up serene, untouched wilderness—only to find that large cut blocks do indeed exist once you venture just a bit further into the forest.

In the end, once we crossed back over the border to the Great White North, I felt a cloud of confusion. Had I liked it there? There were many amazing things to see, beautiful places, and more nice people than I had expected. But, I also felt an overwhelming sense of relief, as if I had survived something small. It’s hard to pin-point.

Must have been the American Dream.