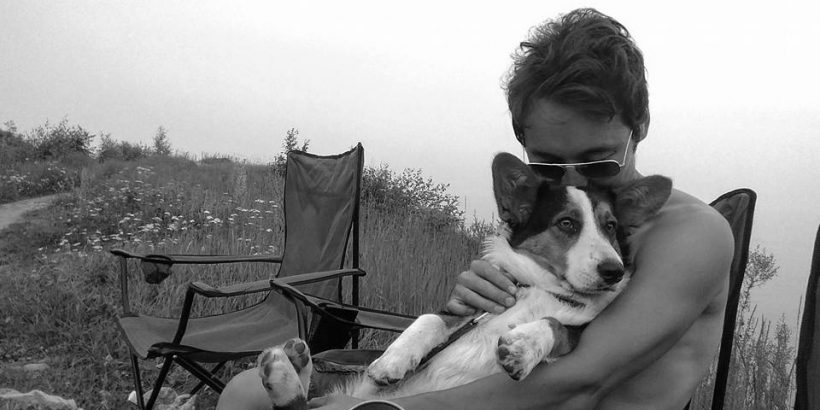 The support van sported a roof rack with the groups of cial hashtag, #thelong_wayhome.

Above: Pavlov and his dog. All photos via The Long Way Home: Explore Russia with Nikolai&Sasha Facebook page.

There’s no doubt your years at university play a unique part in your personal growth. You transition from the tight confines of high school to the daunting world of careers, or you expand your skills to embark on a new path.

You will meet new people—people with similar interests, and people you just can’t comprehend. And sometimes, that person you found will be sitting beside you seven years later around a campfire in the wild Siberian woods.

On May 12, Nikolai Pavlov left Moscow and started “The Long Way Home Tour” to the other side of the world’s largest country—on his bike. Alongside him was his friend Alex Vigandt. In their support van, Pavlov’s sister Yara, his corgi puppy Pastushok, and Andrew Boogards, a fellow VIU alumnus who graduated with Pavlov seven years earlier.

The group documented their whole trip on social media and created their own hashtag: #thelong_ wayhome. “I wanted to show people what Russia really is. A lot of people have the wrong idea, the wrong stereotypes,” Pavlov says. “Especially lately, because of the political battle between Russia and the West. I wanted to get away from that. What you see in media is one thing, but at the end of the day, there are still people who are just people.”

Pavlov was born and raised in Russia, in the town of Mirny, and, in 2005 at the age of 18, he decided to go study in Canada. He chose Malaspina College (now VIU) in Nanaimo to call home for this next stage in life.

Pavlov majored in political science and soon met Boogards, a Comox local who was studying economics and global studies. The two instantly connected; they joined the Model UN club and took it to a new level, traveling to conferences in Washington and New York City. Like many VIU students, they spent weekends snowboarding on Mount Washington and visiting Tofino.

In 2009, when the two graduated, they kept in touch but went their separate ways. After working several dead-end jobs, Boogards made the leap to teach English in Korea and started travelling the world. Pavlov moved to Edmonton to do a Masters in Political Science at the University of Alberta, and eventually returned to Russia in 2014 to be with his parents. Now 30 years old, he is a journalist for Russia Today.

As Pavlov’s 30th birthday approached, he had the overwhelming feeling that he had to do something big. He thought back to his days at Malaspina.

“When I was a kid, I wanted to do cross country cycling, from St. John’s to Tofino,” Pavlov says. “But, back then, in college, I didn’t have the balls to do it. I couldn’t organize it and I needed the money. So it was in the back of my mind for a while. Eventually, Alex and I thought, ‘Let’s just do it’.”

So he called up Boogards.

Despite living in Russia most of his life, Pavlov didn’t know much of the country, besides Moscow and Mirny.

“By cycling and going from one point to another, we could actually see everything,” Pavlov explains. “It was crazy, but probably the best thing I’ve done in my life.”

Boogards had even less of a grasp on Russia. Like the vast majority of foreigners, he had only ever seen Moscow. He too wanted to see the whole country, the culture, and the ‘real people’, which made him the perfect travel companion.

“Global Studies is in his soul,” Pavlov says of Boogards. “His soul is everywhere; he’s a citizen of the world.”

Once they were all on board, the hardest part was getting everything organized and started, Pavlov says. The wilderness they went through was challenging, but the planning was vital. Pavlov’s sister played a big part in this, making phone calls to communities and local government for help, spreading their story, and seeking out accommodation.

Then came the major physical adjustment.

“We started slow, doing 80 km a day,” Pavlov says. “Then 100, 120, and eventually 200 km a day sometimes. It wasn’t easy.” Five-month-old Pastushok the corgi, who regularly caught the attention of local media, became a symbol of their ride and helped Pavlov find the strength. “He was my inspiration,” he laughs. “He has short legs and he’s not the most athletic dog, but he has a big heart which motivated me. Neither Alex nor I are super athletes, but he showed me you can be small and the underdog but still do something like this.”

From Moscow, they took the M-7 highway through Vladimir, Nizhny Novgorod, Kazan, and Ufa. They then took the M-5 highway across the Ural Mountains and hit Tyumen, Omsk, Novosibirsk, Krasnoyarsk, Irkutsk, Lake Baikal and then up north to Ust-Kut. After that, they took a four-day barge north on the Lena River (there are no roads in the summer). They landed in Lensk and then cycled 300 more kilometers to reach Mirny, Pavlov’s hometown, on August 29.

Along the way, the group met many locals with stories and lessons to tell. “Uncle Ural, a mayor of the Bashkir village Tolparovo, and Sergei Yemelyanov from the town of Vishnevogorsk in the Chelyabinsk Oblast were the most inspiring ones,” Pavlov says. “Both men taught us what to value in life and the importance of having good relationships with friends, family, and everyone around them.”

Pavlov was also determined to prove that people can use alternative sources of fuel to do just about anything. If he could cycle 6000 km on a bicycle, anyone could cycle to work. Part of this idea came from Colin Angus’s story, the first person to travel around the globe without using any gas. Living in Nanaimo helped solidify that dream.

“I got this environmental inspiration from the Island,” Pavlov says. “The Island got me into running, hiking, and all sorts of outdoors activities.” Having his friend from VIU supporting him along the way gave the trip a nostalgic feel, from sharing memories of college, to Boogards’ steady stream of “that’s what she said” jokes, which were ever so popular back in 2009. They were reminded of the Island again when they came across similar landscapes, such as in the Altay Mountains. When Pavlov and Boogards went hiking, they reminisced about their time doing just that in Nanaimo.

I asked him where he would go if he were to come back to where it all started—to Nanaimo—for a day. He lists watching the ocean in Hammond Bay, grabbing Vietnamese food at Pho A Dong downtown, visiting Professor Catherine Schittecatte on campus, and grabbing a beer at the VIU pub.

“I had the time of my life at VIU, and met some of my best friends, like Andrew,” he says. “Those four years I spent on the Island were kind of life changers. The Island gave me something I didn’t have before.”

The ride across Russia also gave him something: an even deeper yearning to see the world from two wheels. Next on Pavlov’s to-do list is to bike across Canada, an idea inspired by his favourite Canadian of all time, Terry Fox. “Canada is still like a foreign country to me, so I want to see it that way,” he says. University has a way of testing your limits like a 6000 km bike ride as you pedal your way to alumni status. Like most things, you learn as you go, struggle, but also do your best to have a hell of a good time.

You learn things in class, but you also learn just as much outside class. Your limits and patience are tested as new challenges are constantly thrown your way. You might relish in these moments, but sometimes you find yourself praying for the end to come and bring peace to your seemingly endless struggles. You succeed, you fail, you procrastinate; you make amazing and horrible choices.

“I firmly believe you can do it if you have the heart,” Pavlov says. “Whether it’s political science and economics, or biking across a country. It isn’t about talent. Just work hard and you can get better at anything.”