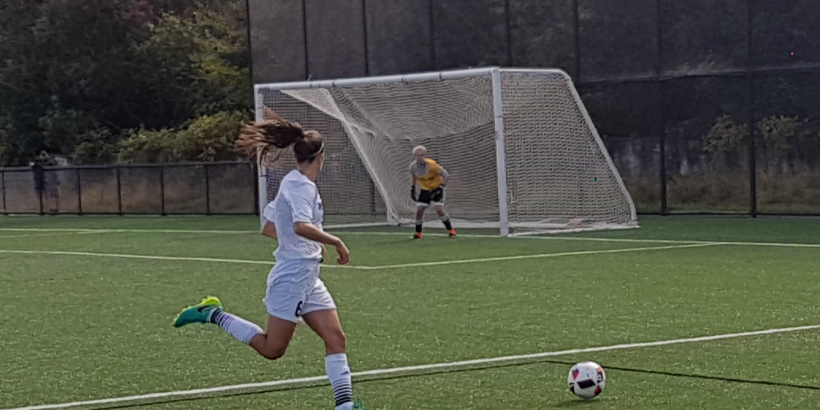 Above: Forward Chloe Gummer lines up a shot. 📷 Cole Schisler

The Mariners took on the Capilano Blues on Saturday in their first home game of the season.

The women kicked off a damp day at Merle Logan Field. Capilano took an early lead, up by a goal going into the half.

As the teams made their halftime adjustments, the sun broke and the Mariners came out looking like a different team. Chloe Gummer was able to capitalize on one of the many scoring opportunities and tied the game late in the second half.

“I thought our energy was really good,” said Mariners’ Head Coach Anup Kang. “We got down, but we didn’t let that get to us. We stayed the course. Overall I thought it was a very good performance.”

The men took the field amid the afternoon sun, hoping to replicate last week’s success against Douglas.

After a scoreless first half, Capilano scored early in the second half. The Mariners were able to battle back, midfielder Bill Bagiopoulos tied up the match mid-way through the second, but Capilano answered back on the next possession, extending their lead to 2-1.

“We created some scoring chances that we didn’t finish,” said Mariners’ Head Coach Bill Merriman. “It’s still early in the season, and I’m still quite excited about this team and the way they play.”

The Mariners face Douglas and Langara at home next week on Saturday and Sunday respectively. Saturday’s game starts at 1 pm and Sunday’s begins at noon.