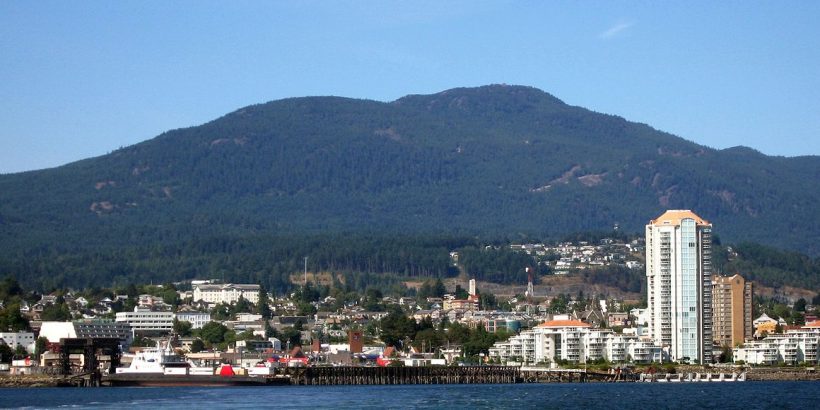 Above: Nanaimo skyline via Wikipedia

The streets of Nanaimo are shifting. Where the salt-air and diaspora meet, hundreds of displaced people gather in huddled masses to talk about how broken the system is that put them there. Downtown Nanaimo is currently a hub of invalids, mental patients, and drug addicts—all of which I have been. And for the last thirty-one days, I’ve played in the streets with my fellow crazy folk.

Ah, the street. To speak of it is to begin the picture of the downtown Nanaimo core—the tourist destinations, the library and coffee shops, the many people milling about in the splendour of the sea breeze. What also goes on in downtown Nanaimo, however, is a homeless population about proportional to Vancouver’s in percentage, grinding through their daily toil in the hopes that the sun rising the next day might give them some reason to be alive. Riel and his girlfriend sell pop-can-tab bracelets outside Serious Coffee. Viv, a grandmother of four, sits by Mambo’s Pizza to barter with her art. Artists from all walks of life ply their trades, busk, and offer information to help navigate the insane cesspool that is Nanaimo’s harbour funnelling—the entire city is a drain at the bottom of a giant swimming pool, long since abandoned and allowed to go to rot.

At least Vancouver has a size to excuse its callousness—but Nanaimo is far from a giant city. It’s a small town stretched out to twice the size, which means at worst there should be the one or two transients that wander around asking politely for change. Instead, we have hysterical bands of citizens frolicking in the grass and fountains, begging for scraps to keep themselves off the concrete.

A quick peek on one of the many Nanaimo Facebook groups will show “normal” people, in full view of their friends and family, warning each other not to go by the tent city that has emerged in the park, for fear of “tweakers”—in likelihood, schizophrenics or other mentally ill people who have been deprived of help and resources for so long they have nothing else to try.

The Nanaimo Mental Health Unit functions more like a turnstile, where police drag in the invalids as they kick and scream, let them mill about without any of their medication, food, possessions, or even hope of seeing a doctor, until they eventually get sick of the toxic atmosphere and leave. Nurses in the PES (Psychiatric Emergency Services) seem to resent the mentally ill for even being alive—“Wouldn’t it be so much easier,” they seem to say with every sigh as a poor, two-days sleepless man timidly asks to be let into the fridge, “if you just followed life’s advice and swallowed that .22?” One of the nurses with spiky hair and a face like a harpy told me, “Philip, there’s probably a good reason you were evicted,” after I was escorted to the premises by two police officers who saw me having a panic attack in an employment center.

Try this fun experiment: pretend to be crazy for one day. Listen only to the voice in your head that says, “Haven’t you always wanted to hurt yourself?” and you will be subject to the subsequent most horrifying reality imaginable. When you are a schizophrenic, and the world thinks that “curing” you is locking you in a room by yourself for five days with no support or medication, you will find that the screaming only gets louder with no one around to bounce off of. You will find that the professionally trained individuals at the hospital know about as much about mental illnesses as a random person could learn through five minutes of WebMD. You will learn that no one in the world cares about your problems, other than to get you the fuck off their property because you’re scaring the neighbours. And you will learn that everyone has problems, but somehow consider themselves above you, just because your problems are too big to deal with on your own.

The situation in Nanaimo is not correct, fair, ideal, or even bearable, at this point. A city that aches to explode with culture is currently a melting pot of toxic nepotism and utter disregard for human dignity. Where are the city council members confronting the issues at the root of our problems, instead of bandying the police force about like a baton to knock on the head of people who yell too loudly?

It’s time to wake up, friends. The world turns whether you like it or not, and it is very easy to fall through the cracks when you can sense how quickly it’s spinning. If you feel moved by the issues in this article, please write or contact your city council about them. If you feel sanctimoniously better than someone who has struggled in a capitalist system their entire life only to finally give up and be displaced into nothingness, go donate your entire pay-cheque to a local charity. And if you think everything I’ve said is a lie, then we’re one step closer to it not mattering that I was homeless in the first place—because now my whole past is erased, as erasure is something Canadians are quite talented at anyway. Bitterness. Regret. Maple syrup. Etc., etc., etc…