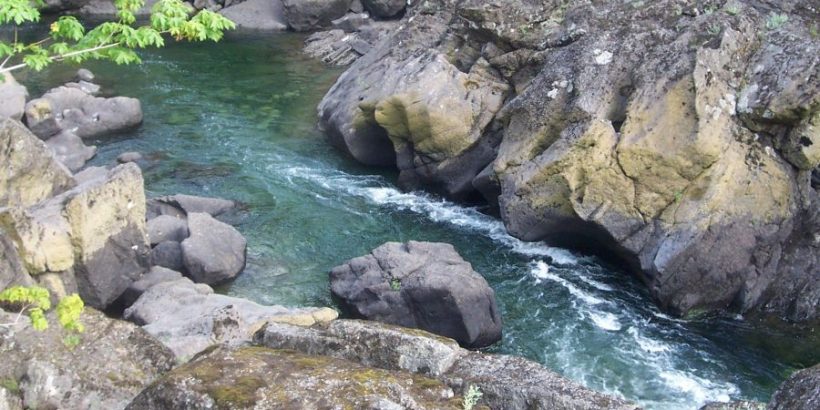 Water is an endless cycle that has existed for millennia, creating a multitude of relationships that have value beyond anything our economy could place on it. Yet, it is a major part of our economy, necessary for all life on this planet, but not protected as a universal human right. It is home, habitat, source of story, resource of food for all animals, nutrients for the forests and oceans, energy, travel, social identity, regulator of water temperature, filter, carbon store, fresh drinking water, and more—but we often take it for granted.

World Rivers Day (September 25) has come and gone, but the sentiments and actions of it will not be forgotten. With news of rivers being under threat in many ways—from pipelines and dams to exploitation—as well as floods (pun intended) of research about the ever decreasing amount of drinkable water on this planet, many minds should be on the planet’s rivers.

The impressive estuary is the fifth largest on the BC coast and the largest on the Island. More impressive is the abundance of resources and life which surrounded me on my journey along the river that day—kingfishers flitted about with their shrill call, salmon and trout seeked sanctuary in the calm side pools, herons waited patiently as stone, and wild apples trees bent with the weight of their productive year. The grasses in gentle motion, its own ocean, dried under a weak fall sun that gave the land a rich golden-red hue. The morning mist danced and created itself where air and river met. The land and sea of this area have been used and appreciated by humans for thousands of years, beginning with the Snuneymuxw people who know this is home, and is tied to my own journey and many others.

These are the things World Rivers Day is celebrating—a multitude of living values. The day was founded here in BC in 1980 and taken up by the United Nations, with the first world celebration of rivers happening in 2005; it has continued to grow and now reaches 60 countries. “The rivers of this planet are the arteries of our planet, lifelines in the truest sense,” Mark Angelo, the founder of World Rivers Day, says.

Here in Nanaimo, the local event gathered about 200 river-loving folks. NALT has been celebrating our local rivers for the last 20 years, but the value of our local rivers requires much more understanding. “It’s about knowing, celebrating and protecting our rivers every day and remembering that if you live in Nanaimo, you are always in a watershed,” says NALT Executive Director Gail Adrienne.

Here in Nanaimo, we have 10 creeks and rivers within city limits that are fish-bearing streams including the Millstone River, which is a spawning site for hundreds of fish every year. This is especially impressive considering its location at the heart of our city.

Adrienne explained there are many stakeholders in our waters, especially the Nanaimo River, including agriculture, forestry, and our drinking water. A healthy river requires the balancing of each of these values as equally as possible. To give people a better idea of stream health, NALT will be hosting a Streamkeepers workshop in late October or early November which is open to all. More information on this can be found on their website <nalt.bc.ca>.

We have found social identity in many ways through rivers. Today, especially at the Sacred Stone Camp of Standing Rock, many find themselves in the role of protector of our riverways. Many Indigenous groups around the world have sounded the call and ahve been met by allies who stand behind their relationship and duty to the world’s rivers.

It is the duty of Indigenous peoples of Canada to consider water as “a never ending circle from the tiny droplets of water falling from the skies to the continuation of its journey to the lakes and rivers and the ground where it is stored,” the Assembly of First Nations (AFN) has stated. “We are just a small part of this, like the grain of sand that cleans and filters the water to make it safe.”

I have heard many people say the best thing about living in Nanaimo is the river, which is something I have felt many times while submerging myself in its refreshing waters. I emerge feeling thoroughly cleansed, every part of me softened, comfortingly raw and exposed. I languish on the stony or sandy banks alongside many who feel as I do—in love with all that is the river and all that it brings out in me. Millions of people around the world share this with their own rivers, who fight and die for this feeling, who believe in and celebrate its sanctity. I urge you to join them.

In our own ways, we can all take up this role by offering actions of respect to the value of the water: