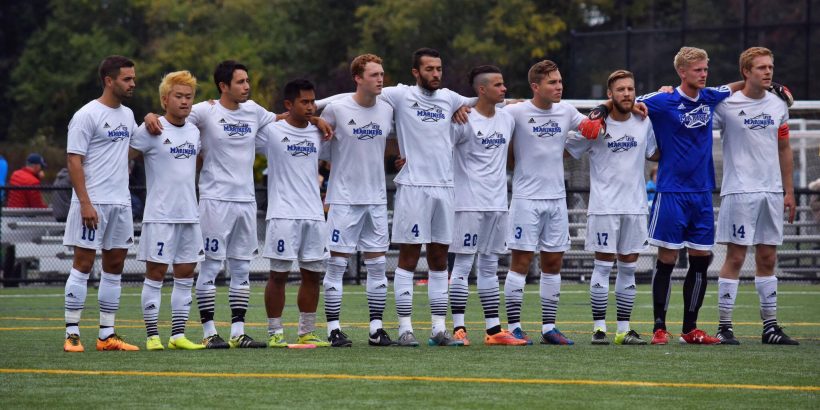 The Mariners kicked off their game against PACWEST rivals, the Douglas Royals, at Merle Logan on a drizzly Saturday afternoon.

Despite a number of opportunities created by the Mariners, they were unable to capitalize, falling behind Douglas at the 22-minute-mark when they scored the opening goal off a free kick. Due to what Douglas saw as unsatisfactory officiating, which they were quite vocal about, Douglas was awarded a red card in the first half, which put them down a player for the remainder of the game.

In the second half, Douglas found the net again, extending their lead 2-0. Again, the Mariners missed scoring opportunities, including a heart-wrenching miss on a penalty kick. In the dying minutes of the second half, Mariners’ defender Travis Brown scored off the rebound of a penalty kick, ending the match 2-1 in favour of Douglas.

“In the first half we had many chances,” said Mariners’ striker Shun Takano. “We made many mistakes shooting and lost those chances. Today was rainy, and so the ball is always slippery and difficult to control.”

Takano did not let the Mariners misfortune get to him, “We must win tomorrows game. We want to go to the championship, so we must win.”

When Sunday’s game against the Langara Falcons came, the Mariners did win, and in spectacular fashion.

Victor Blasco opened up the scoring early, putting away the only goal of the first half. It was an omen of what was to come, as the Mariners rained goals in the second half. Blasco was able to score again following a cross by defender Aly Adeeb, extending the lead to 2-0. With 10 minutes left in the match, Mariners’ rookie Bill Bagiopoulos racked up a pair of goals with the poise of a veteran, followed by midfielder Stephen Ewashko with a beautifully executed header off a deflected penalty kick to put the Mariners at 5-0 to end the game.

“The Mariners have been playing some very exciting soccer,” said Head Coach Bill Merriman, “but they have been struggling to score goals so can only hope to build of this weekend.”