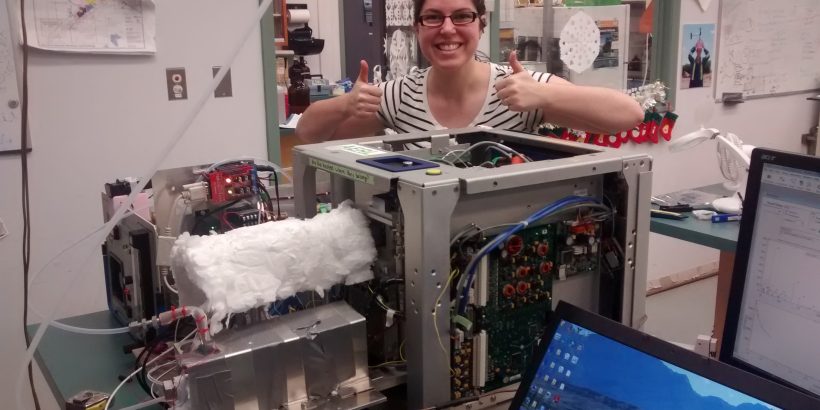 Above: Larissa Richards with Griffin, one of the AERL’s mass spectrometers. Photo by Aislinn Cottell.

Larissa Richards, 30, graduated from VIU in January 2013 with a Bachelor of Science, minoring in both Math and Chemistry. Immediately going on to pursue her Master’s in Chemistry at the University of Victoria, she soon decided to skip that step entirely and jump straight into her PhD. She chose to complete her research in the Applied Environmental Research Lab (AERL) at VIU, because chemists there were already looking into her area of interest: the real-time detection and mapping of chemicals in our environment.

In particular, Richards’ project follows in the footsteps of Nick Davey, a post-doctorate researcher at the AERL and sessional professor who recently completed his own doctorate by researching the real-time measurement and mapping of individual molecules. In an initial exploratory project under the guidance of AERL director Erik Krogh, Richards used much of Davey’s data to test her own methods and equations. It went so well that she decided to make it the project for her Master’s, and now her PhD.

Richards, however, is taking the research in a slightly different direction. Instead of identifying individual molecules one at a time, she’s looking at all of them at once.

“My project follows on [Davey’s] because when we are doing measurements outdoors it’s important to know not only what molecules are present and in what quantities, but also what the source of those contaminants are,” says Richards. “Nick’s project focused on the quantitative aspect— what is there and how much—while mine is focused on the qualitative aspect—where is it coming from, rather than what is necessarily there.”

The key to Richards’ research lies in the fact that depending on where it comes from, any air sample will have a slightly different make-up which is unique to the sample source. These unique chemical profiles are like gas “fingerprints”, and can be used to track where certain chemicals are being produced, as well as distinguish natural emissions from man-made ones. For example, air formed from plant decomposition is going to be slightly different than that of car exhaust, which in turn will be slightly different from the air near a backyard campfire down the road.

“Since I have a math background, we thought it would be cool if I could combine that with my chemistry knowledge in order to try and figure out the sources of the molecules we’re seeing, based on the chemical fingerprints we can measure.”

The AERL has rigged a Mercedes van with an impressive array of monitoring equipment including two different mass spectrometers, a greenhouse gas analyzer, an ozone analyzer, and a weather station that keeps track of wind speed and direction, atmospheric pressure, temperature, humidity, and GPS. Together, these instruments provide almost instantaneous real-time data analysis on the chemical composition of the environment around the van.

Instead of having to cart individual samples back to the lab and wait days or even weeks to get results, Richards’ van can analyze the air as it drives and report back on its make-up right away. This is then linked to the weather station’s locational info, and used to track, on the go, where the detected molecules are coming from. The instruments are also extremely sensitive, especially the “Proton Transfer Reaction Time-of-Flight” mass spectrometer, which Richards says can detect as little as ten molecules of a gas in an air sample of over a trillion, total.

Of course these machines are generally intended for stationary use, and none of them are exactly cheap. Davey had to engineer a number of solutions, from bolted-down box frames to padded air cushions, to keep their instruments from experiencing a potentially disastrous big bang while cruising for chemicals. As Richards succinctly put, there are “zip ties everywhere.”

Thankfully, the van had a “hugely successful” first run at the end of September, when Richards, Davey, and Krogh took it to Vancouver for a spin in the big city. Richards said it was “super cool” to see all the instruments working simultaneously, unlike in the lab, where a sample would be tested with each machine one at a time.

Richards says she is approximately half-way through her PhD at the moment: now that she has the van and ability to collect samples, her work shifts to developing the mathematics needed to correlate all the information smoothly and design a program that allows her to map it on-the-go.

The potential of Richards’ project has huge real world applications, from early detection of chemical spills, to more long-term research into where pollutants originate, and how to manage them.

To help with her research, Richards spent an intensive six weeks in Copenhagen this summer along with approximately sixty other students from over twenty different countries, learning from a multitude of experts in the field of chemometrics. In short, this means using math to find subtle patterns in complicated chemical data sets, something Richards will be doing a lot in the next few years.

At the end of the intensive in Copenhagen, the students presented their current projects and voted on their favourites— Richards won.