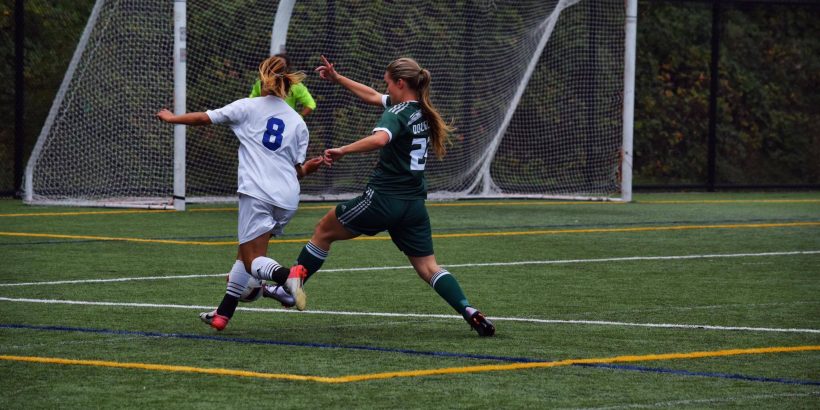 Above: Midfielder Kaylee Dodds fights for the ball. Photo by Brody Jones.

After a series of tie games, the Mariners put back to back victories on their record this weekend at Merle Logan Field.

On Saturday, September 24, the Mariners faced off against Douglas, who they tied 5-5 in their previous match. The Mariners came out strong, forward Karen Battie put points on the board early, scoring at the 3-minute-mark. Battie’s goal was followed up by defender Nicole Foglietta at the 7-minute-mark to put VIU ahead 2-0 early in the first half. A mere minute after Fogliettas’ goal, PACWEST scoring leader Chloe Gummer put the Mariners up 3-0. Douglas was able to answer back at the 28-minute-mark. After a scoreless second half, the game ended 3-1 Mariners.

“We were passing, we were moving, we didn’t just give the ball away,” said Mariners’ midfielder Rachel Jones. “As a team we all played well. We all played well individually too. It was Karen Battie’s first game in PACWEST this year and she scored our first goal, she played an amazing first half, so she definitely did well.”

The Mariners were able to replicate their success against Langara on Sunday, September 25.

“We knew Langara was going to be a tough game,” said Head Coach Anup Kang. “It always is with them as they are well coached, we stayed focused for full 90 minutes and gutted out a big win.”

Mariners’ goalkeeper Emily Rowbotham came up with a big save earlier on, stopping a Langara breakaway, that allowed the team to settle into the game and get their bearings. After a scoreless first half, Mariners’ defender Harroop Malli came up from the back line to score a pivotal free kick goal, putting the Mariners ahead 1-0.

“We were able to rotate all 16 outfield players,” Kang said. “We have so much depth this year, any one of those players can make a difference and have made a difference in our success to date. One thing with this team, they are focused on the moment and don’t look ahead. We will now focus on next weekend’s big games at Capilano and Quest, this group works so hard at training, they push each other to get to the next level, it makes the coaches’ job easier.”