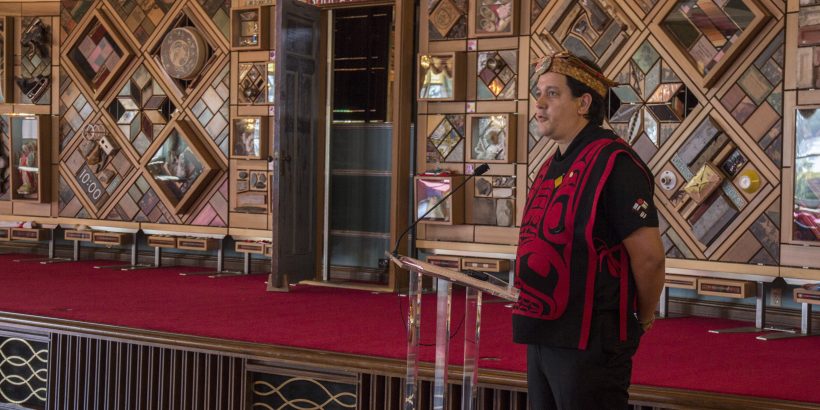 Above: Artist Carey Newman with the Witness Blanket in front of Government House. Photo via Media One.

These are just a few of the 800 artifacts which make up the Witness Blanket, an eight-foot-tall, 40-foot-long installation created by artist Carey Newman to explore the ongoing process of reconciliation with Indigenous people in Canada.

Newman collected the items in the Witness Blanket from former residential schools, government buildings, and churches all across the country. Some are actual fragments of the structures: broken concrete, pipes, and lightbulbs. Others are more personal, dolls and clothing weathered with age and use. Photographs and articles are printed on every inch of the 13 wood panels, a subtle roll-call that becomes increasingly overwhelming the longer you look.

In the centre of the piece is a wooden door, opening outwards with the words SUNDAY MASS in bold black print above the frame. The door, Newman says, is from the former St. Michael’s Residential School in Alert Bay, and is always kept open to symbolise that the events which occurred behind it will never be forgotten, as well as to encourage the ongoing conversation and mindfulness that true reconciliation requires.

First launched in 2014, the installation has toured all across Canada, to small towns and cities alike. Now, through the prolonged efforts of both those on campus and in the Regional District of Nanaimo (RDN), it has come to stay for a time at VIU.

The reception for the Blanket’s installation on October 6 had an amazing turnout. Hundreds attended to listen as several speakers, including VIU Elder and Residential School survivor Gary Manson, touched on the theme of reconciliation and the impact of bringing the Blanket to the university.

Newman himself spoke on how creating the Blanket led him to explore the meaning of reconciliation. He says that reconciliation is “different from equality” in that issues of equality, such as clean drinking water, are human rights owed to everyone, regardless of their history. Reconciliation, he says, is about “casting aside the paradigms that brought us here in the first place” and “constant, intentional remembrance” of the atrocity that took place, so as to honour the victims and ensure it never happens again.

In the viewing room after the reception, the atmosphere was solemn, with quiet murmurs of conversation filling the space as people took in the piece. Some voices were contemplative, others emotional, as the history on display brought painful memories to the surface.

Even for those who don’t have a direct connection to the Residential Schools, it is impossible to see the Blanket and not feel the staggering weight of its message. The longer you look, the more you see: layers and layers of objects, layers of people, and layers of pain. As VIU Vice-Chancellor Ralph Nilson said, “It’s a stationary piece of work, but when you stand in front of it, you will hear all sorts of things.”

Nilson said that he is very grateful for the Snuneymuxw people in Nanaimo for helping install the piece “in the right way.” He said that the university is “all about taking on different dialogues,” and the Blanket is “one of the most powerful installations [he’s] seen.”

The Blanket will be on display in the View Gallery (bldg. 330) until November 30, Tuesday to Saturday between 11 am and 5 pm. There will also be a free workshop, called the “Blanket Exercise”, which invites participants to explore the history of treaty-making, colonization and resistance in Canada. There will be several sessions of the workshop over the next month, and those interested can sign up online by searching VIU Blanket Exercise at  <eventbrite.ca>.

The arrival of the Blanket marks the beginning of a series of events at VIU called Reconciliation Road: Join the Journey with VIU. Other events in the series will include the raising of a third totem pole at Shq’apthut, VIU’s Aboriginal Gathering Place; a concert with Native Canadian singer-songwriter Buffy Sainte-Marie at The Port Theatre; the second annual Indigenous Speakers Series with the Laurier Institution and CBC Radio One’s Ideas; and Testify, an installation created by pairing together lawyers and artists, and having them collaborate on the theme of reconciliation.