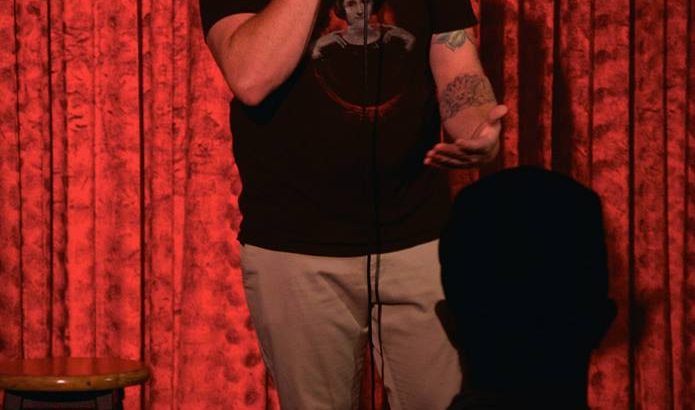 Peter Hudson has been a comedian for five years. He has toured across Western Canada with the likes of Jake the Snake Roberts, Jon Lovitz, Everlast, Platinum Blonde, Bif Naked, and Super Troopers. Now Hudson is focused on bringing world-class comedy to Nanaimo.

“It’s been growing,” Hudson says. “We’ve always had a steady scene, a few of us would do shows here and there. I’d do a show every three months, but then I was like, ‘you know what? Nanaimo is in dire need.’”

Hudson created a show for mental health awareness a few years ago. Hudson brings top talent to Nanaimo and donates the proceeds to the Nanaimo Crisis Centre and suicide prevention through a series of shows from September to March.

“When I started doing comedy I had a childhood friend who had done comedy in Vancouver. We hadn’t talked in 15 years, then all the sudden he moved to Nanaimo and we reunited. I told him I started doing stand up comedy, and I was working away in Alberta, I said ‘Dude, we should do a show together when I get back.’ Just two weeks before I came back his Mom called me and told me he had taken his own life.”

Hudson feels that he is giving back to his friend and keeping his legacy alive through doing shows and helping people. He also believes comedy is a great way to combat seasonal depression in Nanaimo.

“We have an overcast from October ‘til March, people get seasonal depression. Nobody’s Superman, a lot of people get it,” he says. “The best thing you can do is laugh.”

The next mental health awareness show is November 19 at the Queen’s with Canadian comedy award winner, Graham Clark. There will also be a show at Millers Pub on October 22, with James Kennedy, winner of the 2014 Vancouver Yuk Off. Clark and Kennedy will be accompanied by a few local comedians.

Nanaimo comedians have a chance to try out their material every other Tuesday night at Millers Pub by the Departure Bay ferry terminal. While there is a steady group of regular comedians, Hudson says a new comedian has stepped up to the mic every time. The open mics have been happening for two and a half months, Hudson welcomes all aspiring comedians to come to the open mics and try to get a laugh.

“Just do it,” Hudson says. “Just write and get on the stage. Just do it. There is no better feeling than when you go up there and rip a show.”

“I would love to have students coming to the open mics and us coming up there, and just get some youth involved,” Hudson says. “We’re a university town now.”