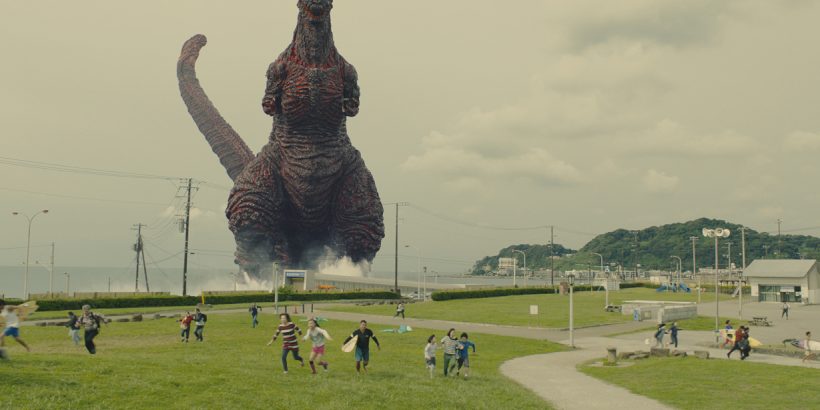 I am a huge Godzilla fan. I’ve seen all of the Japanese films, as well as the two American remakes, so when I heard Toho was producing a new movie for the first time in 12 years, and it was getting a theatrical release in North America this October, I was more than a little excited.

The 2014 Godzilla production by Legendary was the second attempt at creating a western version of the monster, and was successful. I was mostly satisfied with it, but it still didn’t feel like a real Godzilla movie. Only Toho can produce that indescribable feeling, and I got that feeling watching their latest entry in the long-running franchise.

Released in Japan back in July as Shin Gojira, it was retitled Godzilla Resurgence for its limited North American release, but then changed to Shin Godzilla (I suspect to avoid any similarity to this summer’s Independence Day Resurgence), and is the first-ever total reboot by Toho. Anytime Toho brings Godzilla back, whether in Godzilla (1985) or Godzilla 2000 (1999), it’s always a sequel to the original 1954 Gojira (aka Godzilla: King of the Monsters, as it was re-titled for America), but Shin Godzilla is almost a remake, in the sense that it retools Godzilla’s origins and tells a story about his initial arrival and Japan’s attempts to defeat him.

The plot and tone is quite similar to the original. Godzilla is treated as a force of nature, and the response to his attack is depicted in a very realistic manner. While Gojira was inspired by the bombings of Hiroshima and Nagasaki, Shin Godzilla very clearly pulls from the more recent Fukushima disaster in 2011. There are also a lot of political undertones, which makes it feel more unique compared to previous Godzilla films, and that’s the key word here: unique. In a series that’s over 60 years old, Shin Godzilla proves there are still ways to make the series feel new while also paying tribute to what came before.

It takes a different approach than most giant monster movies, by following a large group of characters—top government officials, scientists, military strategists—who work together to solve the problem, instead of a few main characters who are caught in the mayhem or simply watching Godzilla fight another monster.

The pacing is paradoxical, in that it feels both fast and slow. There are lots of quick cuts and brief scenes of people talking, but the build-up to Godzilla’s arrival is deliberate, and time is taken to establish the group of characters before any action occurs.

The visual effects are inconsistent but, for the most part, they work. No longer is Godzilla a man-in-a-suit, which made me a little sad at first, knowing the method is now officially a thing of the past, but the design still retains that overall aesthetic and movement.

When Godzilla first appears on-screen, someone sitting behind me burst out laughing. Without spoiling too much, I’ll say Godzilla has an initial form that’s quite a departure from the giant monster we’re all familiar with, and it may trigger laughter, confusion, pity, or a mixture of feelings, but his next form is more like the traditional Godzilla (as seen on the poster).

Godzilla’s mythology is updated and expanded, in all the right ways. When Godzilla is on-screen, he’s excellent, but viewers who thought the 2014 Godzilla was a little too shy and didn’t appear frequently enough will likely be disappointed again, since he’s featured even less in Shin Godzilla, although his appearances are better spread throughout. Unlike Godzilla (2014), the human characters are actually interesting enough to carry the monster-free scenes, up to a point.

As it builds up to the climax, it ramps up nicely, but then it plateaus for a few scenes, robbing the third act of some tension, and this is one area of the movie I thought could have been improved. There were a few too many talking scenes before the climax—had these been trimmed and the movie clocked in at 105 minutes instead of two hours, it may have moved along better in the final act. The climax, too, is very reminiscent of Gojira’s, which I appreciated, but I still couldn’t help but feel it was a little anti-climactic.

Another minor issue is the subtitles. For some reason, every single person and location is given extremely specific on-screen information, with the English subtitles in yellow text laid over white Japanese text. Often the dialogue will be on the bottom of the screen, with the character or location title at the top, and it’s near-impossible to read it all with the quick cuts, nevermind actually looking at the characters’ faces as they speak.  These hard to read subtitles may be a big turn off for some viewers—personally I found it jarring for the first 15 minutes or so, but adjusted soon after and by the end no longer noticed. It didn’t feel necessary to know the name of every person and place, and it’s not something that the older films did (to this degree, anyway), so I’m not sure why the filmmakers felt it was necessary.

In the end, Shin Godzilla was made for the true fans of the series. I’m not sure how well it will connect with general audiences here, but I really enjoyed it. My initial reaction was to say it’s not as fun as Godzilla (2014), but is a better made film. However, the more I think about Shin Godzilla, the more I like it, unlike Godzilla (2014). So if you didn’t like that film, you probably won’t like this one, but if you’re a fan of the original Japanese films, or even if you used to be as a kid, it’s worth checking out in theaters.

Shin Godzilla is playing at Landmark Cinemas (Avalon) on Wednesday, October 19 and Monday, October 24, both at 7 pm.