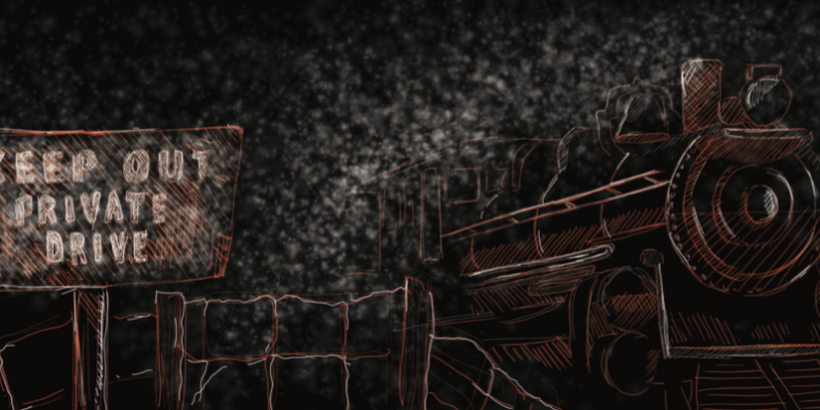 The first time I saw the St. Louis Ghost Light I didn’t know what I was looking at.

One of my earliest childhood memories was of a strange cloud in the basement of our home. The room had inexplicably filled with a greenish fog that slowly rolled together and transformed into a human-like shape. My ears rang and my body froze. I tried to breathe. It was something I did not want to see. Somehow, I broke the spell and ran. My mom told me I was imagining things, but I learned as an adult she had also seen similar things herself.

Over the years, I sometimes woke to see that green cloud hovering over me. Not just in one home either. I would close my eyes and hide beneath the cover of my blankets. As I grew older, I slowly rationalized that the cloud was a figment of my imagination. I was half-asleep. It was not real.

It would be years before someone else saw it at the same time as me.

When I was 17, I stopped believing in ghosts. I thought I had grown up—but really, I was just naive.

The St. Louis Ghost Light is one of Canada’s most famous ghost stories. Most of the people I grew up with in Prince Albert, Saskatchewan have seen it. Whole groups of us saw it at the same time.

In 2014, Canada Post featured the haunting on one of their stamps and posted the story online. The legend was that a railway worker had been killed on the tracks near the town of St. Louis close to the South Saskatchewan River. The area is mostly farmland, but there is a tree-lined dirt road where the tracks had once been. Nowadays, fences with “No Trespassing” signs restrict access, but back then the road was wide open.

The St. Louis Ghost Light site has appeared in documentaries, newspapers, magazine articles, books, YouTube videos, and on the news. Groups have studied the ghost phenomenon and have proposed theories ranging from swamp gas to headlights in the distance.

I have seen this light 100 times or more. At times, it looks like a large, single headlight. At others, it sways back and forth and is red. This is said to be the conductor looking for his head.

Some sacred spaces incite peacefulness, such as temples of worship, well-tended gardens, and New Age rooms of healing. The St. Louis Ghost Light has the opposite effect. Something feels unsettling. Car stereos turn on or off by themselves. Vehicles sometimes won’t start. The air burns electric.

Like many places reputed to be haunted, the old road became a place for parties. The location was remote, so we’d light fires and drink whatever we could get our hands on.

Pretty girls would come to impress us, and we’d be there to show them how fearless we really were. Adults came too. Curious first-daters. People bored of the bar. Sometimes the police would arrive. They would pour out our drinks and tell us to put out the fire and leave.

These gatherings were spontaneous. There would usually only be one or two cars at a time. If there were several people, it would be the same group of friends hoping to see the light together. On a few occasions, there were a couple of parties taking place at the same time. This usually meant separate bonfires a short distance apart from one another. Being rural, the place was otherwise dark and quiet. The stars were bright and the sounds of civilization were far.

The first time I saw the light up close was a night when several of us had come to build a fire. As usual, music spilled out of a nearby car while the crackling flame kept us warm.

We hadn’t learned yet that the spot on the road where we built our fire was a bad one; it was less visible to authorities in the distance, but it wasn’t a good place to see the light. Once we started to build the flame on higher ground we saw the ghost light more often. It would appear and disappear over and over again. It became so common, that eventually it was just a recurring curiosity. It was more than that in the beginning, of course, and always more than that when one of us left the safety of the fire.

That night was the beginning.

Three of us had never seen the light, so we left the fire to seek it out. We were brave on the outside, because we listened to hard music, fought, and shot guns. We were also brave because we didn’t believe the stories were real.

We thought some of our friends were ahead of us on the old trail, trying to scare us, as an intensely bright flashlight kept shining in our faces.

It looked like a motorcycle headlight at 10 feet away. It would be there for several seconds and then go out. We were annoyed because the light was jarring and it hurt our eyes.

“Turn that fucking thing off!” I yelled after the third
or fourth time.

Eventually, I figured the prank got old and they stopped. We became bored ourselves and headed back to the fire, wondering who had been ahead of us.

“Did you see it?” someone asked when we returned.

My two friends and I looked back and forth at one another in disbelief. There were thick shrubs on either side of us, so we knew that no one had passed us. There had been no one ahead of us.

I had become a believer once more.

For more ghost stories by Shanon Fenske, check out his blog livinglibraryblog.com.