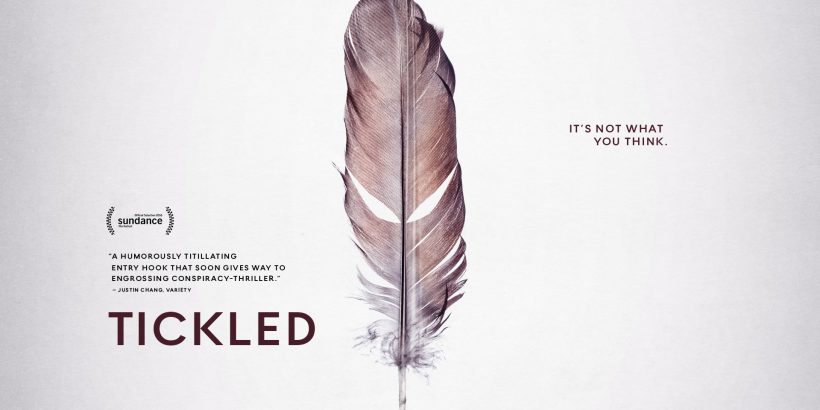 When New Zealand filmmaker and journalist David Farrier stumbled across a bizarre video of three men tickling a fourth who was strapped to a table, he did a little digging and found himself staring down the world of competitive endurance tickling. When Farrier reached out to the production company behind the videos, Jane O’Brien Media, he was met with an ice-cold reception and told that Jane O’Brien was not interested in dealing with “homosexuals”. Thus began Farrier’s journey into the world of competitive endurance tickling, and the world of Jane O’Brien. All of this is documented in bizarre and terrifying detail in his 2016 documentary Tickled.

If you were a fan of last year’s HBO documentary series The Jinx, which chronicled the life and murders committed by Robert Durst, or the 2010 documentary Catfish, and still haven’t found yourself an opportunity to watch Tickled, then you’ve been missing out. It’s hard to dive too deep into this without spoiling it entirely, but I will do my best to keep the reveals to a minimum.

Immediately after Farrier began his quest for answers, he is visited by representatives from Jane O’Brien Media who have agreed to meet with him. This meeting turns out not to be what it seems, and starts off a barrage of legal threats aimed at David. These threats loom heavy over the entirety of the film, and even bring the filmmakers close to shutting down production. They battle with whether or not these legal threats are legitimate, and eventually decide to face down the bullies at Jane O’Brien Media, and tell to this story no matter what.

The resulting documentary is one of the most heart-pounding experiences I’ve had watching a movie this year. More than once, the documentarians move to confront someone in scenes that had my heart racing, and made the hair on the back of my neck stand up. Tense moments aside, you also get the true stories of men featured in these tickling videos and the abuse that they suffered at the hands of Jane O’Brien when they attempted to leave her organization. You also learn about a disturbed man named David D’Amato, who becomes the focus of the film, and start to realize how long these tickling videos have been around.

Once you finally begin to understand the scope of Jane O’Brien Media, it becomes a genuinely frightening film. You are taken into a tickle-cell based in a poor neighbourhood, and learn how dependent these men become on the money and benefits they receive from O’Brien. According to the documentary, Jane O’Brien seems to have a limitless amount of money and resources to ensure that the men become dependant. It appears that the agreements made do not include the public release of the tickling videos, which are released once the men try to leave. There is also an assertion that these videos are completely non-sexual in nature, and only heterosexual men are considered to participate.

In the end, a bizarre and intricate conspiracy is exposed, with no consequence to Jane O’Brien Media. Jane O’Brien Media actually continues to operate—you can visit them on Facebook or at their own website. I won’t be sharing links because, frankly, what they do is abhorrent and not deserving of additional attention.

According to an interview the filmmaker did with MTV, Farrier has been sued a number of times by D’Amato, none of which have been successful. D’Amato also showed up at a screening of the film to publicly confront Farrier about the film. Footage of that particular confrontation is available online, and is something to behold.

There is so much to unpack about this film, and it really does need to be seen to be believed. I found myself saying “Wait, what?” out loud more times than with any other film I’ve watched. I haven’t had such an intense visceral reaction to a film before or since the ending of The Jinx. If you haven’t checked out this documentary, or have some aversion to documentaries, it’s time to get on this.

As a documentary and a film, Tickled ranks among the best of the year. The combination of a fascinating subject, the great editing, and pacing throughout the film are a testament to Farrier’s abilities as a filmmaker and a documentarian.

Tickled is available to purchase on iTunes, and via other means that shall not be named.